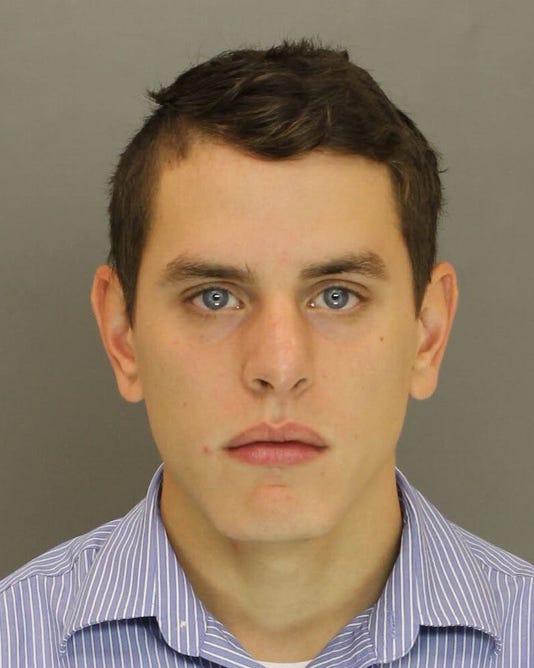 A Dover Township man was speeding and had just passed another vehicle when he crashed into a fence — killing his passenger, 18-year-old Dover Township volunteer firefighter Chase Hartlaub, according to charging documents.

In addition to the vehicular homicide case, Mendez also is charged for allegedly trying to gain access to Dover Township's water supply, according to charging documents filed by Northern York County Regional Police.

Attorney Chris Ferro, who is representing Mendez in both cases, did not respond Wednesday to a message seeking comment.

The crash: Police said Mendez crashed his BMW just after 11 p.m. June 15 at the intersection of Emig Mill Road and Mayfield Drive in Dover Township.

Hartlaub, who lived in New Salem, was the sole passenger in the BMW and was in the front passenger seat, police said.

According to charging documents, Mendez had a backyard party at his home, which is just a few blocks from the scene of the crash.

Dover Twp. Firefighter Chase Hartlaub, 18, died of injuries hours after a car he was riding in crashed on June 15, 2018, police said. (Photo: Courtesy of Facebook)

At some point, Mendez and Hartlaub left in Mendez's BMW, police said. A third friend, Austin Choate, told police he was leaving the gathering and was walking to his parked car when he saw the BMW "fly up the street," documents state.

Another driver told police she was eastbound on Emig Mill Road when Mendez's BMW "suddenly" passed her "so quickly she never saw the approaching headlights in her rearview (mirror)," charging documents state.

She said the BMW passed her a few hundred feet prior to the vehicles reaching the intersection of Mayfield Drive, according to documents.

Another witness, who was driving west on Emig Mill Road, said he saw the eastbound BMW illegally pass another vehicle, then watched as it crashed into another vehicle at the intersection, police said.

BMW clipped SUV: A third witness said the BMW was going about 60 mph when it ran the stop sign at the intersection and clipped the back end of a Ford Explorer, according to police.

The Explorer was being driven by Choate, who was driving home, police said.

Choate also told officers that the BMW ran the stop sign and said he saw "a figure" running from the scene, but he couldn't describe that figure, documents state.

After clipping the Explorer, Mendez's BMW crashed into a split-rail fence, shearing off eight fence posts, according to documents.

"After striking the final post, the vehicle braked heavily, skidding across just under 200 feet of grass and pavement from three residential yards and two driveways," documents state.

During the crash, several of the fence rails impaled the BMW's windshield, with one striking Hartlaub, who died of severe head trauma, according to charging documents.

Not intoxicated: Northern York County Regional Deputy Police Chief David Lash said alcohol was not a factor in the crash.

Less than a half hour after the crash, West York Police Detective Michael Mendez Sr. called the York County 911 Center to report that he was with the driver who fled, officials said.

The father and son met Northern Regional officers a short time later at a convenience store less than a mile from the crash scene, documents state.

When police interviewed the younger Mendez, he was wearing a yellow T-shirt and jeans, which matched the description of the fleeing driver given by eyewitnesses, according to documents. The T-shirt appeared to have blood on it, police said.

Dover Township fire/rescue crews were the first to respond to the crash scene, where they quickly realized they were caring for one of their own.

He had just graduated from York County School of Technology and was starting a new job at a local collision center, according to Dover Township Deputy Fire Chief Brian Widmayer.

Water tower: In a separate case, Mendez II is charged with the felonies of criminal trespass and criminal mischief as well as the misdemeanor of tampering with a public water system.

Northern Regional Police allege he and others gained access to a water tower belonging to the Dover Township Water Authority on Oct. 16, 2017.

They went over a barbed-wire fence, ignored a "no trespassing sign," then moved a camera that had been pointed toward a ladder that accesses the top of the tower, according to police.

"The camera was moved so there could be no visual (images) of the person accessing the ladder," charging documents state.

Documents suggest Mendez allegedly climbed a tree next to the fence to get inside the property.

The ladder was protected by another locked gate that has a security sensor, and Mendez allegedly affixed duct tape to that sensor so when the gate was opened, the sensor wouldn't alert water-authority employees to the breach, documents allege.

Caught by duct tape: Police collected that piece of duct tape and found that Mendez had left a latent fingerprint on the tape's sticky side, charging documents state.

The water authority put the tower out of service until it could be examined, police said.

The state Department of Environmental Protection checked the tower's structural integrity and tested its water, and found no evidence that either was tampered with, police said.

Lash said the motive for the water-tower incident isn't known.

The deputy chief also said investigators are still trying to identify other suspects in the water-tower trespassing case.

Anyone with information is asked to call the Northern Regional Police tip line at 717-467-TELL or email information to tips@nycrpd.org.