A family fight in a Fairview Township home led to charges for both a son and a father over the weekend, according to authorities.

A family fight in a Fairview Township home led to charges for both a son and a father, according to authorities.

Incident: Police said Daniel Hocker and his wife had been arguing and drinking most of the day, and Dakota Hocker was in his room trying to avoid them.

Dakota Hocker heard what sounded like a physical altercation and found his mom lying on the porch calling for help, charging documents state.

He brought his mother back inside and confronted his father about what happened, causing them to argue, officials said. Dakota Hocker then struck his father, causing a fight between them, court documents allege. 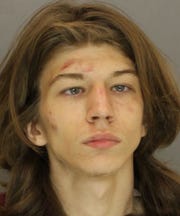 Dakota Hocker, police said, had a bloody nose and minor bruising on his forehead.

Daniel Hocker's wife told police that she had made a comment to her husband that made him upset, causing him to attack her, court documents allege.

She also told authorities that during the altercation she suffered an injury to her wrist, but she would not tell police what had happened, officials said.

The father and son were taken to the county's central booking unit for arraignment.

Phone numbers could not be found for the two. They do not have attorneys listed.

Their preliminary hearing is scheduled for Oct. 31 at District Judge Scott Gross' office.