York City man gets prison in I-83 body-dumping case

A York City man who was involved in a home invasion that led to the death of his friend almost two years ago was sentenced to prison for his role in the incident.

York City man gets prison in I-83 body-dumping case

A York City man who was involved in a home invasion that led to the death of his friend almost two years ago was sentenced to prison for his role in the incident.

On Monday, July 30, Terrence Lavelle Wintermyers, 33, was sentenced to one year and nine months to 3½ years in prison, according to Kyle King, spokesman for the York County District Attorney's Office.

Last month, Wintermyers pleaded guilty to burglary and conspiracy to commit burglary, according to court records.

Wintermyers then acted as lookout for Martin, according to police.

Martin, 36, of York City, was fatally shot after breaking into a home in the first block of East Cottage Place and trying to rob Kevin "Blocks" Brightful and Luis Felix Quinones. 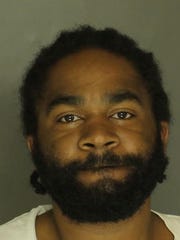 Home invasion: Court documents indicate Martin was armed with a .40-caliber handgun when he committed the home invasion on Aug. 11, 2016.

During the home invasion, Martin scuffled with Quinones and fired one shot, documents state. Brightful then fatally shot him, the York County District Attorney's Office has said.

Brightful and Quinones put Martin's body in a trash can, drove it to a wooded area off Seaks Run Road along Interstate 83 in Springfield Township and dumped it there, state police have said.

In April 2018, he was sentenced to four to eight years in state prison after pleading guilty to being a convicted felon in illegal possession of a firearm, abuse of a corpse and tampering with evidence.

Prosecutors have said murder charges against Brightful were dropped because he was justified in shooting Martin.

Quinones was sentenced to 5 to 10 years in prison.

Wintermyers will receive credit for the 96 days he spent in York County Prison, according to court records.