The families of fatal teen crash victims Stone Hill and Nick Mankin expressed frustration that Jodie Tierney could be freed while awaiting her appeal. 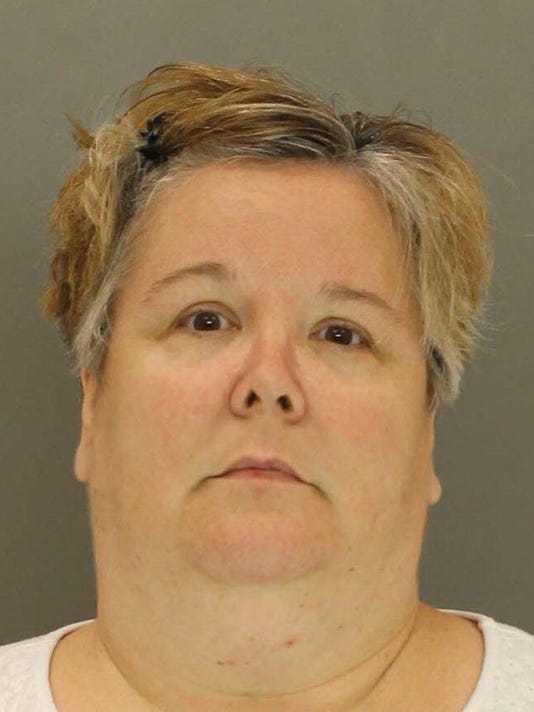 A Red Lion-area woman currently in state prison for providing alcohol to teens — including two who died in a fiery DUI crash — has been granted bail while she appeals her York County conviction.

Jodie Tierney, 47, of the first block of Percheron Drive in Windsor Township, has been serving her sentence of 2½ to six years of incarceration after being found guilty of two counts each of involuntary manslaughter and child endangerment and one count each of corruption of minors and furnishing alcohol to minors.

Her Philadelphia-based attorney is appealing the conviction to the state Superior Court and asked presiding York County Common Pleas Judge Maria Musti Cook to allow Tierney to be released on bail pending that appeal.

In court on Monday, Feb. 26, Cook said her first reaction to the defense attorney's statement of appeal issues was, "did you read the same (trial) transcripts I read?"

The judge said she's "fairly certain" Tierney's conviction will be upheld on appeal.

However, Cook noted, it will take the Superior Court at least a year to rule on Tierney's appeal, meaning Tierney would have served almost her entire sentence by the time the appeals court decides whether to overturn the conviction.

Tierney's husband and former co-defendant, Stephen D. Tierney, began to cry in the courtroom after hearing his wife is now eligible for release.

'No right to cry': The families of fatal-crash victims Stone Hill and Nick Mankin appeared shocked by Cook's ruling.

"This is total bulls—t," Glenn Hill, Stone's father, told reporters as the angry family members filed out of Cook's courtroom.

"He has no right to cry about anything," Hill said of Stephen Tierney. "He gets to go home to his kids."

"And we go home without our kids," added Carol Tracey, Nick's mother.

"We're happy that the judge granted bail and we're optimistic about our chances on the appeal," defense attorney Demetra Mehta said.

Jodie Tierney's bail was posted Monday and she was scheduled to be released from York County Prison about 6:30 p.m., according to prison records.

The background: Stone, 17, and Nick, 16, were killed shortly after 7 p.m. June 16, 2015, when Stone lost control of his SUV, which flipped, slammed into a utility pole and burst into flames on Slab Road in Lower Chanceford Township, just minutes from Stone's home.

They were on their way to Stone's house from the Tierney home, where they had spent the day hanging out, swimming and drinking, according to prosecution testimony.

From December 2014 to June 2015, there was vomiting, passing out and one occasion of bed-wetting, he said. One young man was body-slammed by a friend for trying to inappropriately touch girls, he said.

Never alerted parents: One of the young men became so drunk on rum he was unresponsive and had to be carried to his father's car, according to testimony, but still the Tierneys didn't alert any parents.

Barker has called Jodie Tierney's inaction "the epitome of indifference" toward the teens and scoffed at her assertion that she had no idea that drinking was going on in her home.

Cook has previously said in court she doesn't believe the statements Jodie Tierney made about the circumstances leading up to the fatal crash.

Cook also said the Tierneys took "minimal accountability" for their actions despite their "overwhelming guilt."

"The parenting displayed (by the Tierneys) in this case rivals some of the worst I've ever seen," the judge has said. 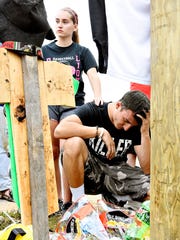 Cody Stern, a 2014 Red Lion Area Senior High School graduate, front, is comforted by Red Lion student Lindsay Wilhelm at a memorial built at the base of a utility pole on Slab Road in Lower Chanceford Township for their friends and classmates Stone Hill and Nicholas Mankin on the day after the two Red Lion students died in a fiery crash. (Dawn Sagert photo) (Photo: The York Dispatch)

Appeal issues: Mehta's appeal issues for the state Superior Court, laid out in a Feb. 20 filing to inform Cook, include the argument that the evidence against Jodie Tierney was insufficient to convict. Mehta also is arguing that during trial, the prosecution:

Mehta also is arguing that Jodie Tierney's charge of furnishing alcohol to minors should have been separated from the other charges for trial "because the prejudicial value of joinder and risk of confusion was too great."

Mehta claims the jury should not have been allowed to see photos from the crash scene because the "unfair prejudice ... was overwhelming, and the photographs had no probative value."

More: Witness: Tierney said 'she does what she wants - it's her rules'

During Monday's bail hearing, the prosecution argued that Jodie Tierney violated conditions of her supervised bail while she remained free awaiting trial.

"There were multiple admonitions from the bench to knock it off," Buhite reminded Judge Cook.

Cook said she believed those violations came "more from a sense of entitlement ... than anything else."

The judge said if the Superior Court denies the appeal, Jodie Tierney must report to prison immediately, or she will issue a warrant for the defendant's arrest.

Probation for husband: Stephen Tierney, 47, is serving three years' probation on his case.

He pleaded guilty July 10, on the eve of trial, to corruption of minors and furnishing alcohol to minors.

Stephen Tierney's guilty plea was not for the deaths of Stone and Nick. It was for allowing the group of his older son's teen friends to drink at his home on one occasion.