Three officers and multiple Taser deployments were needed to stop a man on LSD last month in Railroad. 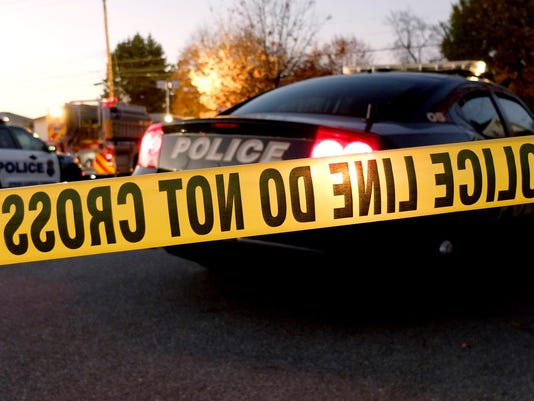 Three officers, multiple Taser deployments and a soccer net were needed to take down a Railroad man who fought with police while on LSD late last month, according to officials.

Southern Regional Police say Joshua David Carter, 26, had taken LSD before running into a street in Railroad and fighting an officer, prompting two other officers to respond.

Found in street: Officer Michael Storeman was patrolling the first block of Main Street  about 10 p.m. Jan. 27 when he saw a man in a T-shirt and boxer briefs, later identified as Carter, running in the middle of the road, yelling and waving his arms, according to court documents.

Storeman pulled over, and as he was exiting his car, Carter ran past his side door and called him a devil, police said. Storeman wrote in charging documents that Carter also made comments about killing him.

Storeman followed Carter until he stopped in the area of South Main Street and Spruce Street, where Carter turned around, clenched his fists and "assumed a fighting stance" while he continued to tell Storeman he was going to kill him, police said.

Storeman identified himself as a police officer, but that didn't stop Carter, officials said.

Fought: Carter charged at Storeman, but Storeman stepped aside and took him to the ground, according to police.

While on the ground, Carter continued fighting Storeman, causing the two to roll down an embankment, court documents allege.

After creating some distance between himself and Carter, Storeman deployed his Taser, but Carter then took off running, according to officials. Police say Carter ran into a soccer goal and became entangled in the net.

Storeman then tried taking him to the ground again, charging documents state.

He tried to put Carter in handcuffs, but Carter continued to resist by trying to hit and kick the officer, all while calling him the devil, police allege. A Taser was deployed two more times before another officer arrived, according to court documents.

"Carter showed little to no compliance to the Taser activation and continued to resist arrest," Storeman wrote in charging documents.

Backup: Officer Jesse Lawrence arrived and found the two on the ground, and police say Lawrence attempted to get control of Carter, but Carter continued resisting.

Lawrence then took out his Taser and deployed it — marking the fourth Taser deployment since the incident began, according to police.

The Taser worked briefly, but Carter then continued resisting, stopping the two from handcuffing him, court documents allege.

Lawrence then activated his Taser again, shocking Lawrence once more, which stopped him from fighting, but he still didn't follow verbal commands, according to officials.

Officer William Hanson arrived on the scene and helped the two get Carter's hands behind his back, but all three were unable to get control over Carter, despite several attempts to do so, court documents state.

Lawrence then deployed his Taser for a third time, causing Carter to roll over onto his stomach, police said. Officers were then able to somewhat get control over Carter, but he continued resisting, according to charging documents.

Storeman had to knee Carter in the thigh to stop him from injuring the other officers, police said. The three were then able to take Carter into custody, charging documents state.

LSD: Just before EMS arrived, Carter admitted to ingesting LSD that day, according to officials. While waiting for emergency personnel, Carter tried to get up, and police say he continued to make threats.

Storeman suffered an injury to his right wrist and forearm, and he was  treated at York Hospital for his injuries, according to officials.

Charges were filed Feb. 5, and Carter has a preliminary hearing scheduled for March 29 before Magisterial District Judge Lindy Lane Sweeney. He could not be reached for comment.