York City's shootings drop by half, GVI credited for reduction

York City had just half the shootings in 2017 that it had the year before, according to city officials, who credit the national GVI initiative with reducing those numbers.

York City's shootings drop by half, GVI credited for reduction 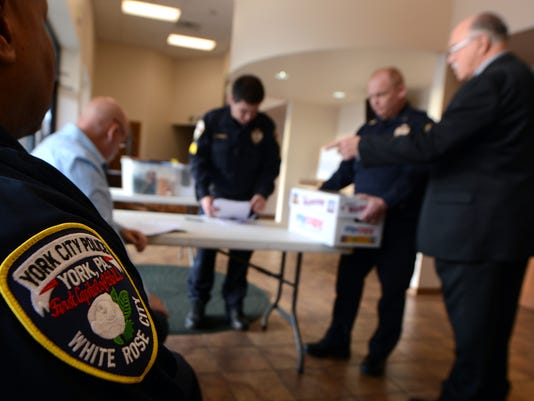 York City had less than half the shootings in 2017 that it had the year before, according to city officials, who credit the national Group Violence Intervention initiative with reducing those numbers.

Sixty-seven people were shot in York City in 2016, according to York City Police Lt. Matt Leitzel.

"This is a near-record year for homicides," he said.

While the higher-than-average number of homicides in York City so far this year is a primary concern and focus for police, department and city officials are pleased with the results of the GVI initiative so far, he said.

Leitzel described the reduction in the number of total shootings as significant.

"I expect us to continue to see very good progress," Leitzel predicted.

There also was a 15 percent reduction this year in the total number of gun-related incidents in York City, compared with 2016, according to Leitzel. Such incidents include everything from targeted gun crimes to random gunfire in which no one is hurt.

The GVI initiative, which began in York City in February after more than a half-year of planning, led to city officers, other law enforcement and GVI community partners making more than 500 contacts with city residents, according to Leitzel.

About 50 or so of those contacts ended with someone being arrested, the lieutenant said, but the vast majority of contacts were positive.

Those community contacts often happen while officers are out doing GVI consequence enforcement, meaning specifically targeting groups or neighborhoods where gun violence is a heightened concern.

Officers are told to explain to people why they're in the area and what they're doing, and to explain the philosophy of GVI, Leitzel said.

Residents have by and large responded positively to the message, according to Leitzel and Tice.

About GVI: The Group Violence Intervention initiative is modeled after nationally renowned criminologist David M. Kennedy's work in Boston in the 1990s.

So to reduce violent crime, law enforcement has to identify and target that small group of people, who are often involved in gangs or the drug trade, or both. Those targeted during call-in presentations then carry the message back to their associates. 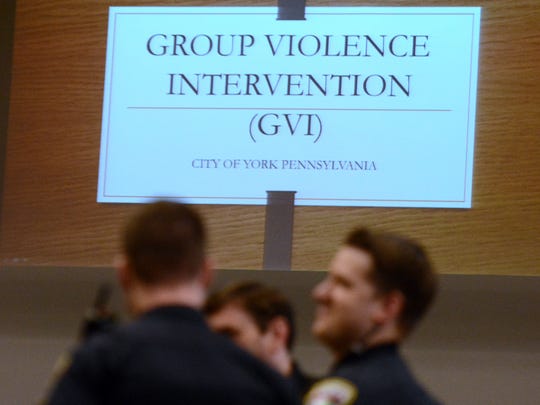 The young people who have attended York's call-ins aren't necessarily the violent element. They are primarily chosen for their ability to spread the word to those who do perpetrate gun violence.

So far, York City has had two call-ins — in February and August, both at Stillmeadow Church of the Nazarene's York City campus. At them, local, state and federal officials and community leaders stayed on point by delivering a consistent message of inclusion and help, as well as of consequences. At the core of that message?

"We will stop you if you make us. But we'd rather help you, if you let us."

The message: The message includes telling the group that they are valued in York City, that no one wants to see them dead or in prison and that the community will help them in any way possible. That kind of help includes job training, finding a job, helping the person with food, diapers and clothing, and providing a sympathetic ear.

"You are our future," York City Director of Community Relations Edquina Washington told the young people during the August call-in. "Each of you deserve the right to live a safe, prosperous life. We respected you enough to bring you here today — help us help you in putting an end to the violence."

To that end, community partners, including LifePath Christian Ministries, have stepped up and provided all kinds of assistance to those targeted by GVI. Its director, Matt Carey, is a member of York City's GVI governance committee.

Unwanted attention: But those who continue to fire guns and shoot people in York City can expect a very different sort of special treatment. The perpetrators of gun violence — as well as every member of their group — will become the focus of police and prosecutors, locally and federally, for every possible infraction, no matter how small.

Leitzel is now a member of the GVI governance committee and said he's "glad to be a part of it."

The implementation of the GVI initiative has also led to weekly briefing meetings for law-enforcement partners, including members of various police departments, county probation officers, prison officials, sheriff's deputies, the York County Drug Task Force and members of federal agencies such as the FBI and the Bureau of Alcohol, Tobacco, Firearms and Explosives.

The York City School District Police have been invited to join as well, he said.

"We have a representative from about every entity that can be involved. ... I can't remember a time when we had a group of people get together the way we do now," Leitzel said. "And we're always looking for ways to expand that."

Shooting reviews: Those weekly meetings allow law enforcement to review shootings and share information with each other, he said.

The GVI initiative does not include a plan for dealing with juveniles, but Leitzel and Tice said the shooting reviews are a way to help learn and share information, whether it's officially under the GVI umbrella or not.

And that information is shared right away, they said.

"Sometimes that intel starts to snowball right in the room," Leitzel said.

Leitzel and Tice say that developing partnerships and forging relationships between governmental, police and community agencies has been an important component of GVI.

"But while it's a positive thing, it's not quite that simple," he said.

Helfrich said that for some York City residents, selling drugs "is what heats their homes and feeds their families."

That's why it's so important for GVI to focus on providing employment opportunities for those most at risk, he said.

Helfrich said he thinks York City residents will be more likely to support GVI when they understand the initiative and the benefits it could have for them. He said he doesn't feel the wider York City community truly understands the GVI philosophy.

He said with the exception of a few people who love "the adrenaline and fake coolness factor of being in a gang," most people would rather not be part of the gang lifestyle.

Editor's note: York City officials invited The York Dispatch to embed a reporter in the Group Violence Intervention planning meetings and call-ins, with the understanding nothing would be written about what the reporter witnessed until after the initial call-in. The group-violence intervention model encourages communities to allow a reporter early access, in part to encourage more thorough reporting.