Detectives have arrested a man they say fatally shot football player Julio Ferrer after the two disagreed about how to split up robbery proceeds. 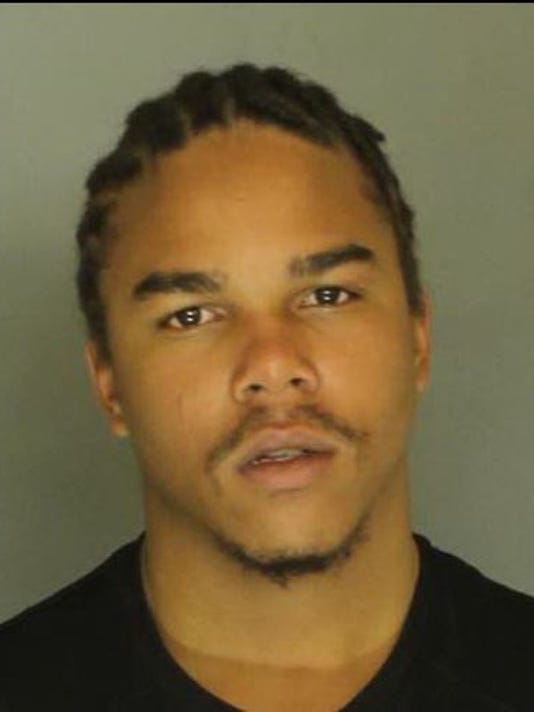 York City detectives have arrested a man they say fatally shot semi-pro football player Julio Ferrer over the weekend after the two disagreed about how to split up robbery proceeds.

His girlfriend woke up, saw his body lying on the floor of the apartment and called 911, charging documents state.

"(Ferrer and Brown) knew each other and were apparently involved in a robbery," Leitzel told The York Dispatch. "The incident that resulted in Mr. Ferrer's death was because of a disagreement they were having over splitting up the money from that robbery."

The lieutenant said he can't yet speak publicly about that crime, as it remains under investigation by city police.

"The robbery was brought to light through the homicide investigation," Leitzel confirmed.

Brown's charging documents allege Brown and Ferrer recently set up Ferrer's cousin, who was robbed of about $2,500 cash. The cousin didn't report the crime to police, documents state.

Robbery loot: Brown shot Ferrer once during an apparent disagreement over the robbery proceeds early Saturday morning, the lieutenant said.

Ferrer suffered a gunshot wound to the neck, according to the York County Coroner's Office, which has ruled his death a homicide.

Brown confessed to a friend that he fatally shot Ferrer through the man's apartment door because they disagreed about how the robbery money should be split up, charging documents state.

"Because of this, Brown not only shot Ferrer, but thought it was justified," lead Detective Paul DeHart wrote in charging documents.

Brown later went to a street vigil for Ferrer and "attempted to derail the investigation" by telling bystanders he'd seen the alleged robbery victim walk into Ferrer's apartment the night of the slaying, documents state.

He played defensive tackle for the Silver Bullets and was on that team for six years, co-owner Chris Umbarger has said.

Jessica Wells, a friend of Ferrer's, told The York Dispatch that Ferrer was a kind person and a good friend who could be trusted.

"He was always willing to help out his fellow teammates or friends," she said. "He bent over backward for the people he cared about."

Football was Ferrer's passion in life, according to Wells. He'd show up for every practice — often early and always ready to work.

"He was that guy on your team you could depend on, and he was an excellent football player," Wells said.

Members of the U.S. Marshals Service fugitive task force arrested Brown without incident on Tuesday, Dec. 19, near the corner of North George Street and Hamilton Avenue, according to the marshals service.

Brown was arraigned at the county's central booking unit and is now in York County Prison without bail.

Stabbed classmate: It's not the first time Brown has been in the news for alleged violence.

In October 2014, when he was 16 years old, Brown was arrested by York City Police for allegedly stabbing a 15-year-old classmate at Goodridge Academy, 329 Lindberg Ave.

The classmate escaped life-threatening injury, and Brown was charged as an adult with aggravated assault and related offenses.

The classmate suffered stab wounds to the back and arm, which Brown was accused of inflicting as the two sat next to each other in class, police said at the time.

Brown's 2014 criminal charges were moved to juvenile court in February 2015 for resolution, prosecutors said at the time.