"Everything that we have asked for so far, we've either received or we are anticipating getting very soon," said Auditor General Eugene DePasquale.

The auditor general's office began its investigation of the controversial waiver program — including the criteria for eligibility, fairness within industries and whether lobbyists or legislators had undue influence in the process — about two weeks ago.

"Everything that we have asked for so far, we've either received or we are anticipating getting very soon," DePasquale said in a news conference Thursday.

There's been bipartisan support for the audit, including from the governor himself, but the April 30 decision to issue subpoenas fell along party lines in a 7-4 vote in the Senate Veterans Affairs and Emergency Preparedness Committee.

Senate Democrats described the subpoena as "politicking" because DePasquale had already announced an audit of the program.

DePasquale, also a Democrat, is running for Congress in Pennsylvania's 10th Congressional District, which includes parts of York, Dauphin and Cumberland counties. 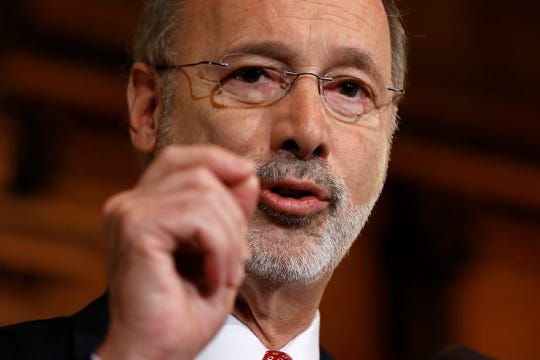 FILE - In this Dec. 29, 2015 file photo, Pennsylvania Gov. Tom Wolf speaks with members of the media at the state Capitol in Harrisburg, Pa. Wolf is attacking local elected officials making plans to reopen in defiance of his shutdown orders as cowards deserting the pandemic battlefield. Wolf threatened Monday, May 11, 2020 to block aid to rebellious counties in an escalating political fight over his administration's handling of the coronavirus. (AP Photo/Matt Rourke, File) (Photo: Matt Rourke, AP)

The deadline for Wolf to comply with the subpoena was May 8, and the governor did not send the requested documents to the Senate.

In a letter to Regan, the governor invoked executive privilege and said the business owners who applied for waivers submitted confidential and proprietary information with their applications.

"These businesses could not have envisioned that this information, which may include trade secrets, customer data and in some cases, personal health information about small business owners, would be subjected to legislative (and potentially public) review," Wolf stated.

DePasquale said he would not name specific businesses or business owners in the audit report.

Senate Republicans filed a lawsuit Monday in Commonwealth Court to compel the governor to produce all notes, memos, emails and other correspondence having to do with the waiver program.