The York County Agricultural Society, which runs the fair, is not named in the suit.

After two were injured on the Giant Wheel ride Friday, Sept. 13, fair officials gave an update on the ongoing investigation Saturday. York Dispatch

Two people who were injured when the Giant Wheel amusement ride malfunctioned at the York Fair last year have filed a lawsuit against the ride's manufacturer, the midway vendor and the inspector who certified the ride.

Berks County residents Scott Speicher, of Bern Township, and Colleen Steffan, of Fleetwood, were riding Sept. 13 in the same gondola on the Giant Wheel when a faulty pin caused a metal rod to come loose and the gondola to turn sideways, dumping Speicher onto the asphalt 25 feet below and jostling Steffan around inside, the suit claims.

This is also the conclusion the state Department of Agriculture reached in its investigation into the incident, according to a report released in October.

"Both my clients are very seriously injured and are looking forward to their day in court," said Kenneth Millman, the attorney representing Speicher and Steffan.

The suit alleges that Degeller Attractions, the former midway vendor for the York Fair, as well as Chance Rides Manufacturing, the ride manufacturer, and Richard Warble, the inspector, were negligent in their responsibility to ensure the ride was safe for patrons.

Speicher and Steffan are seeking compensatory damages, punitive damages and payment of court costs, and they're demanding a jury trial.

The York County Agricultural Society, which runs the fair, is not among the defendants, and Degeller Attractions is no longer providing the fair's amusement rides.

The change in midway vendors was already in motion when the Giant Wheel incident occurred in September and was the result of the fair switching to a summer event beginning in 2020, fair officials have said. The York Fair has rebranded itself as the York State Fair starting this year 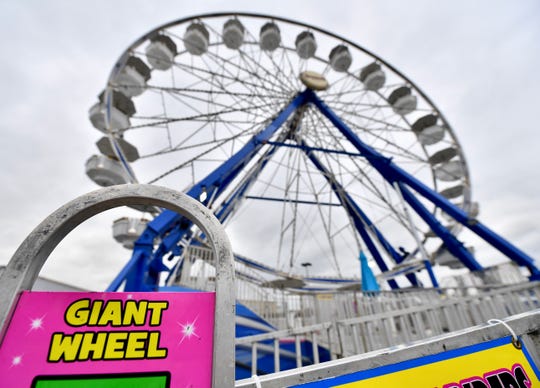 The Giant Wheel ride is seen Saturday, Sept. 14, at the York Fair. Two people were injured on the ride the night before. Dawn J. Sagert photo (Photo: The York Dispatch)

Injuries: Speicher's and Steffan's injuries from the accident were considerable, court filings state.

Speicher suffered a brain hemorrhage, fractured skull and sinuses, and several broken bones, including those in his right elbow and wrist, left hand and several ribs.

He lost functionality in his fingers and suffered cuts and bruises, among other injuries.

Steffan suffered a large hematoma on her lower back, abdominal wall bruising, a dislocated tailbone and injuries to several spinal discs.

She also suffers from post-traumatic stress disorder and nerve pain.

Both Speicher and Steffan underwent surgery for their injuries, which they say have reduced their enjoyment of life, caused chronic pain and resulted in lost wages and lost earning potential, among other things.

The incident: The Giant Wheel, which is a version of a Ferris wheel, has several gondolas that carry patrons in a circle as the wheel rotates.

The gondolas are designed to swing and remain upright as the wheel rotates, but when a metal rod connected to Speicher and Steffan's gondola came loose, the gondola jammed and began to rotate with the wheel, ending up at a 90-degree angle, according to the Department of Agriculture's report.

At some point prior to the accident, a small pin connecting the rod to the gondola had either fallen out or been removed, state officials said.

The missing pin was not recovered at the scene, but investigators removed a faulty pin from a second gondola on the wheel.

Ride operators told investigators that before the accident occurred, they heard a loud noise coming from the wheel and tried to stop the ride after seeing the gondola stuck at a 90-degree angle.

Patrons who were on the ride told investigators they tried to yell to the ride operators after seeing the loose metal rod, but a loud power generator operating nearby prevented the operators from hearing them.