"Governor, I commit to you that York County stands ready to get back to business," York County Commissioners Julie Wheeler said Monday.

The York County Board of Commissioners begged Gov. Tom Wolf on Monday to allow York County to move from the red to yellow phase of reopening amid the COVID-19 crisis, but it was unclear if the commissioners' pleas will make a difference.

In a Facebook Live video Monday, Commissioner Julie Wheeler wouldn't say whether the commissioners would defy Wolf's order in the event that he ignores their request, only that they've made their case to him.

"Governor, I commit to you that York County stands ready to get back to business," she said.

By the end of the week, 37 of Pennsylvania's 67 counties will be in the yellow phase, leaving York County and 29 other counties in the red phase until June 4.

The yellow phase allows most retail businesses to reopen and lifts the stay-at-home order.

Wheeler said York County has met the case-number benchmark — having fewer than 50 new cases per 100,000 people per day over the course of 14 days — for moving to yellow.

County officials are also closely monitoring the number of available beds at hospitals and the supply of ventilators and personal protective equipment, she said, which are part of the criteria for reopening.

Another reason Wheeler said the county is ready to begin reopening is that infections at nursing homes and long-term care facilities, whose populations are most at risk of succumbing to the virus, have remained low in York County.

Eleven residents and three employees at six nursing homes in the county have tested positive for the virus since the outbreak began, and one person at a nursing home has died, she said.

Wheeler, a Republican, did not respond to questions Monday afternoon about whether she's facing political pressure from local GOP leaders to speak out against Wolf's decision to keep York County on lockdown.

There appeared to be bipartisan consensus on the county board Monday that York County should be allowed to start reopening its economy.

"I personally am ready, willing, able and desiring to go from red to yellow, if it’s possible," said Commissioner Doug Hoke. 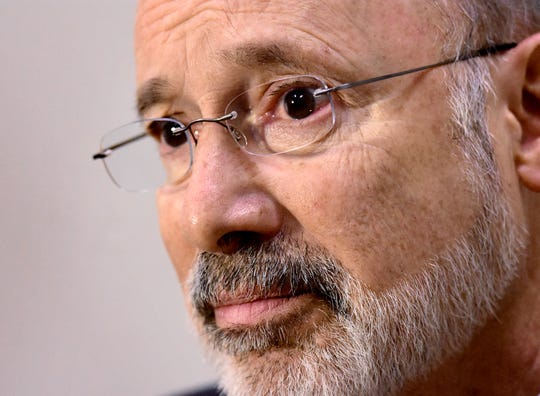 Hoke, a Democrat, also said he understands county commissioners don't have the authority to override the governor's edicts.

In a Facebook post Sunday, Republican Commissioner Ron Smith said he agrees with state lawmakers who penned a letter to Wolf last week requesting that York County be moved immediately into the yellow phase.

Smith also said he supports District Attorney Dave Sunday's announcement that his office will not prosecute criminal citations for alleged violations of the closure order.

In the directive, Sunday said the guidelines and definitions about which businesses are exempt from the order are continuously changing and are too vague to enforce consistently.

"We as elected officials took an oath to protect and defend the freedoms and rights of American Citizens and I intend to uphold that promise," Smith said.

Earlier Monday, Wolf rebuked county officials across the state who have told their police not to enforce the shutdown orders against businesses that reopen while still in the red phase.

The governor said those county leaders were being "cowardly" and putting their constituents, including business owners, in danger.

As of noon Monday, 57,154 people in Pennsylvania had tested positive for COVID-19, and there had been 3,731 virus-related deaths, according to the state Department of Health.

In York County, 784 people had tested positive and 13 people had died.

More: York DA: Not citing open businesses a legal issue, not a political one