Poodles primp up at the Westminster dog show

Primped to perfection, and adorned with puffs and pompoms, Siba is the absoulute picture of what many see as the ultimate show dog at the Westminster Kennel Club. Like it or not.

Poodles primp up at the Westminster dog show 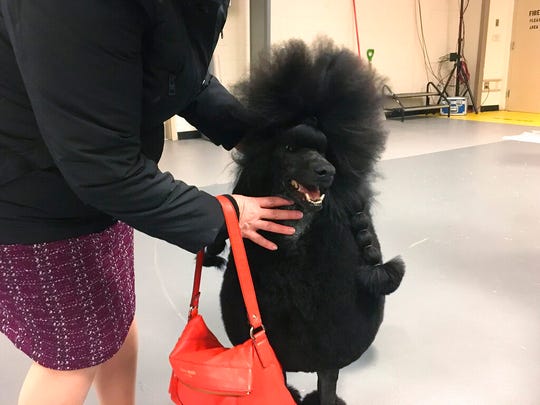 NEW YORK — Primped to perfection, and adorned with puffs and pompoms, Siba is the absolute picture of what many see as the ultimate show dog at the Westminster Kennel Club.

Because in the world of dogdom, among all the beagles, retrievers and terriers, there's nothing that polarizes people like a poodle.

Especially the big standard size, with their fancy coifs that would put the supermodels now in town for Fashion Week to shame.

"I don't care for the cut. I understand it's for function, to keep their joints warm, but not for me," said Carol Sebastian of Aberdeen, New Jersey.

Sitting with four of her spinone Italiano pals, snacking near Ring 1, Sebastian offered another view on the pooch pageant.

"I think if they cut the poodle in a different way, they'd have a lot more fans. They'd get beyond frou-frou."

Either way, Siba sure looks the part of the Park Avenue crowd, even though she's from Allentown, Pennsylvania. Almost 4, sleek, with shiny black hair and a shaved backside, she pranced and advanced to the best-of-seven ring for best in show Tuesday night.

A whippet, a Havanese and a Shetland sheepdog also had earned their place in the final.

Certainly, the poodles aren't to blame for the mixed reviews.

"I always say, don't let the haircut fool you. This is a smart, athletic, active dog that was originally developed in Germany as a water retrieving dog," longtime dog expert David Frei said.

With a more simple trim, he figured, "the world could unabashedly root for them. In the meantime, I will anyway."

Wire fox terriers have been the most successful at America's top canine competition with 15 titles.

Siba was showing for the last time, set to retire after this event.

"She's beautiful, she's confident and has attitude," handler Chrystal Murray-Clas said. "She keeps me on my toes."

Longtime handler Clint Livingston said he saw Siba two years ago at a show in York, Pennsylvania, and predicted a great future.

"I fell in love with her," Livingston said.

He also understands the poodle predicament.

"They've been glamourized and for them, it's a beauty pageant," he said. "But underneath all that hair and everything, there's structure and function."

To Sebastian and her spinone Italiano friends, there are two sides to the poodles.

"They're beautiful dogs and super smart. There's something for everyone," said Andi Gabler from Fredricksburg, Virginia. "They're wonderful dogs. But would I want one? No."

"Our dogs like to roll in the mud," chimed in Becky Tevis from Portland, Oregon. "We're not that fancy."

Fact is, neither is Siba. A picky eater, she's not.

So how did she prepare for the nonsporting group judging Monday night at the Garden? A gourmet meal? Nope.

Rather, a fast-food fix: a grilled chicken sandwich from a handy McDonald's.

"It's all about the chicken," Murray-Clas said.