Kobe Bryant, the legendary basketball star who spent 20 years with the Los Angeles Lakers, was killed Sunday when the helicopter he was traveling in crashed and burst into flames Sunday morning amid foggy conditions in the hills above Calabasas, sources told the L.A. Times. 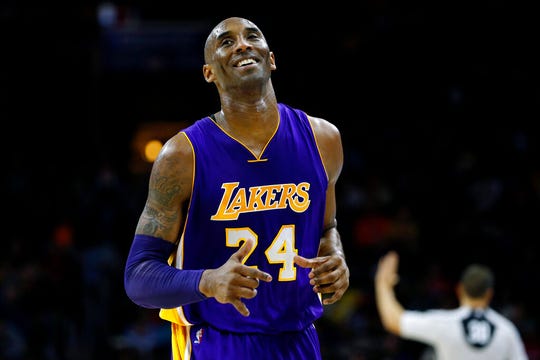 In this Dec. 1, 2015 file photo Los Angeles Lakers' Kobe Bryant smiles as he jogs to the bench during the first half of an NBA basketball game against the Philadelphia 76ers in Philadelphia. The Retired NBA superstar has died in helicopter crash in Southern California, Sunday, Jan. 26, 2020. (AP Photo/Matt Slocum) (Photo: Matt Slocum, AP)

NBA legend Kobe Bryant, his 13-year-old daughter and seven others were killed in a helicopter crash on a remote, steep hillside in Southern California on Sunday, his sudden death at age 41 touching off an outpouring of grief for a star whose celebrity transcended basketball.

The chopper went down in Calabasas, about 30 miles (48 kilometers) northwest of downtown Los Angeles. Authorities said that nine people died, with no survivors, after earlier putting the death toll at five. Bryant, an all-time basketball great who spent his entire 20-year career with the Los Angeles Lakers, was among the victims, a person familiar with the situation told The Associated Press.

A different person familiar with the case confirmed that Bryant’s 13-year-old daughter Gianna also was killed.

Los Angeles County Sheriff Alex Villanueva would not confirm the identities of the victims Sunday afternoon pending official word from the coroner.

“God bless their souls,” Villanueva said at a news conference.

Bryant’s death stunned Los Angeles and the sports world, which mourned one of basketball’s greatest players. Sources said the helicopter took off from Orange County, where Bryant lived.

The crash occurred shortly before 10 a.m. near Las Virgenes Road, south of Agoura Road, according to a watch commander for the Los Angeles County Sheriff’s Department. Four others on board also died.

Bryant excelled at Lower Merion High in Ardmore, Pennsylvania, near Philadelphia, winning numerous national awards as a senior before announcing his intention to skip college and enter the NBA draft. He was selected 13th overall by Charlotte in 1996, but the Lakers had already worked out a deal with the Hornets to acquire Bryant before his selection. Bryant impressed Lakers General Manager Jerry West during a pre-draft workout session in Los Angeles. Less than three weeks later, the Lakers traded starting center Vlade Divac to the Hornets in exchange for Bryant’s rights. Bryant, whose favorite team growing up was the Lakers, had to have his parents co-sign his NBA contract because he was 17 years old.

The 6-foot-6 guard made his pro debut in the 1996-97 season opener against Minnesota; at the time he was the youngest player ever to appear in an NBA game. He started in only a handful of games during his rookie season, coming off the bench in support of Nick Van Exel and Eddie Jones. However, coach Del Harris played him more as the season progressed, allowing Bryant to showcase the skills that made him a top candidate for rookie of the year. Those skills were also on display when Bryant won the 1997 NBA slam dunk competition. 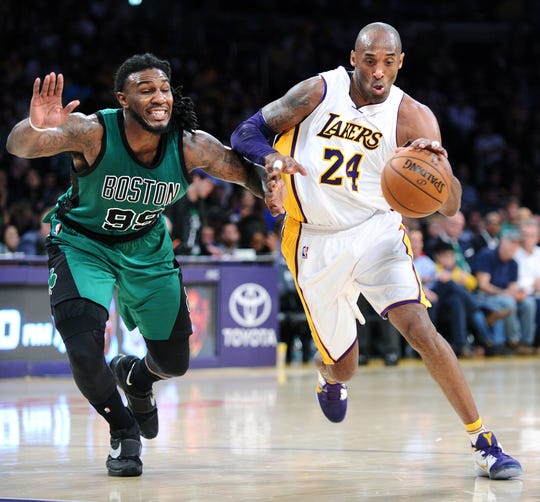 Bryant continued to improve during his sophomore season in the league, averaging 15.4 points per game. However, his breakout came in the lockout-shortened 1998-99 season when he started in all 50 games after the Lakers traded away Van Exel and Jones.

Bryant and leading scorer Shaquille O’Neal quickly morphed into one of the most lethal scoring and defensive combinations in the league. Together, with coach Phil Jackson guiding them, they led the Lakers to three consecutive championships (2000-02) as Bryant began to cement his place as the game’s top player.

Despite coming together to win some of the most closely fought playoff series in Lakers history, friction started to develop between Bryant and O’Neal. Tension between the two stars continued to build during the 2002-03 and 2003-04 seasons as the Lakers failed to capitalize on their status as top contenders for the NBA title. Making matters worse, Bryant was arrested in July 2003 on allegations of sexual assault.

The charges were eventually dropped, but Bryant’s reputation took a hit.

After the Lakers lost to Detroit in the NBA Finals with a star-studded team that included Karl Malone and Gary Payton, O’Neal was traded to Miami and Jackson’s coaching contract was not renewed. As the team’s undisputed leader, Bryant signed a seven-year contract to remain with the team.

Bryant summed up the tensions between him and O’Neal after the Lakers won the NBA title in 2009: “We’re great as individuals, but … it’s probably the first dynamic duo that had two alpha males on one team. We managed to make it work for three championships.” 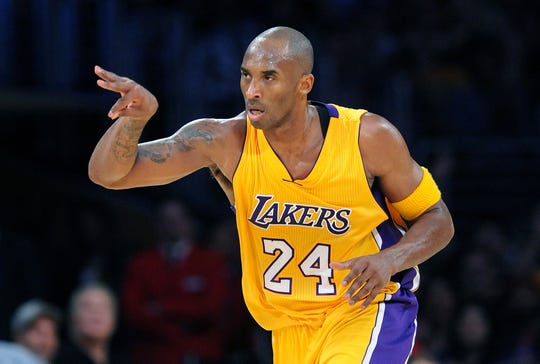 Bryant posted some of the best offensive numbers of his career over the next three seasons, but the team struggled, failing to make the playoffs in 2005 before suffering consecutive first-round defeats to Phoenix in ‘06 and ‘07. Jackson returned to the team for the 2005-06 season, and Bryant went on to lead the league in scoring that season with a career-best 35.4 average. He scored 40 points or more in 27 games and became the first player since Wilt Chamberlain in 1964 to finish with 45 points or more in four consecutive games. His biggest single-game achievement came Jan. 22, 2006, against Toronto when he scored a career-high 81 points, second most in NBA history. Earlier that season, on Dec. 20, 2005, he scored 62 points in 33 minutes through three quarters of a game against Dallas; he had outscored the entire Mavericks team, 62-61, entering the final quarter, in which Bryant did not play. Bryant continued to impress during the 2006-07 season, scoring 50 or more points in a team-record 10 games and averaging 31.6 points a game to capture his second NBA scoring title.

“He is the No. 1 player in the league, by far,” Washington gaurd Gilbert Arenas said in 2006. “With a player like him, he just wants that challenge. He’s just that fierce competitor. He doesn’t want to get out-showed. He’s the one who everybody’s afraid of.”

Bryant’s 2007-08 NBA MVP season got off to a tumultuous start after he reportedly demanded to be traded. He was reportedly unhappy with Lakers General Manager Mitch Kupchak and Jackson.”I would like to be traded,” Bryant said during a radio interview. “Tough as it is to come to that conclusion, there’s no other alternative. It’s rough, man, but I don’t see how you can rebuild that trust. I just don’t know how you can move forward in that type of situation.”

Bryant eventually backtracked on his trade demands and posted perhaps his best all-around season, leading a team re-energized by Pau Gasol’s arrival from Memphis in February 2008 to a first-place finish in the Western Conference. The Lakers embarked on a memorable playoff run before losing to Boston in the Finals. Later that year Bryant went on to win a gold medal with the U.S. team at the 2008 Summer Olympic Games in Beijing. 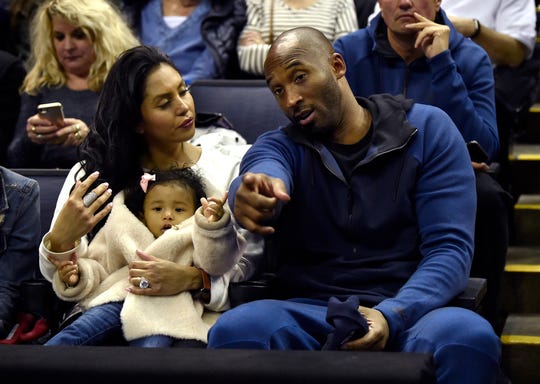 With Bryant pleased about the direction the team was heading, he guided the Lakers to back-to-back titles in 2009 and 2010. He was named the NBA Finals MVP both years as the team once again ascended to the top of the NBA.

Ongoing soreness in Bryant’s knee and ankle coupled with the team’s heavy reliance in him played a role in the Lakers’ championship run coming to an end in 2011. Bryant posted his lowest points per game totals since the 2003-04 season as he dealt with the aftereffects of offseason arthroscopic knee surgery. He went on to win his fourth NBA All-Star Game most-valuable-player award but fell short of his ultimate goal of winning a sixth NBA title. Bryant also became the youngest player in NBA history to amass 27,000 career points.

Bryant finished third in league scoring in 2011-12 despite dealing with ongoing knee and ankle issues. In January 2012, he scored at least 40 points in four consecutive games, which included a 48-point effort against the Phoenix Suns.

Following the team’s acquisition of Dwight Howard in August 2012, the Lakers were regarded as a favorite for the NBA title. However, friction between Bryant and Howard started to develop as the team struggled. Despite this, Bryant led the NBA in scoring for much of the first half of the season and surpassed NBA great Wilt Chamberlain for fourth all-time in league scoring. But Bryant’s season came to a disappointing end when he suffered a torn Achilles’ tendon against the Golden State Warriors on April 10. The injury and subsequent surgery prevented Bryant from playing in the early portion of the 2013-14 season.

Bryant, who signed a two-year, $48.5-million contract extension with the Lakers before the start of the 2013-14 season, did not return from injury until December. He played in only six games before suffering a lateral tibial plateau fracture in his left knee. The injury forced him to miss the remainder of the season as the Lakers limped to a 27-55 record, missing the playoffs for only the second time since Bryant joined the franchise. 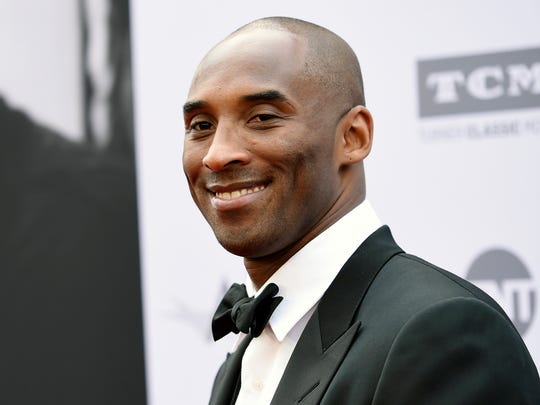 He retired from the NBA but began a new career in Hollywood.

In 2018, he won an Oscar along with director Glen Keane for the animated short film “Dear Basketball.”

The crash ignited a brush fire and made it difficult for firefighters and emergency personnel to get to the aircraft, he said.

The fire was contained to the crash site, officials said. There were no homes in the area, and no roadways were impacted.

The Sikorsky S-76 helicopter had five people on board and there appeared to be no survivors.

Allen Kenitzer, an FAA spokesman, said his agency and the National Transportation Safety Board were investigating.