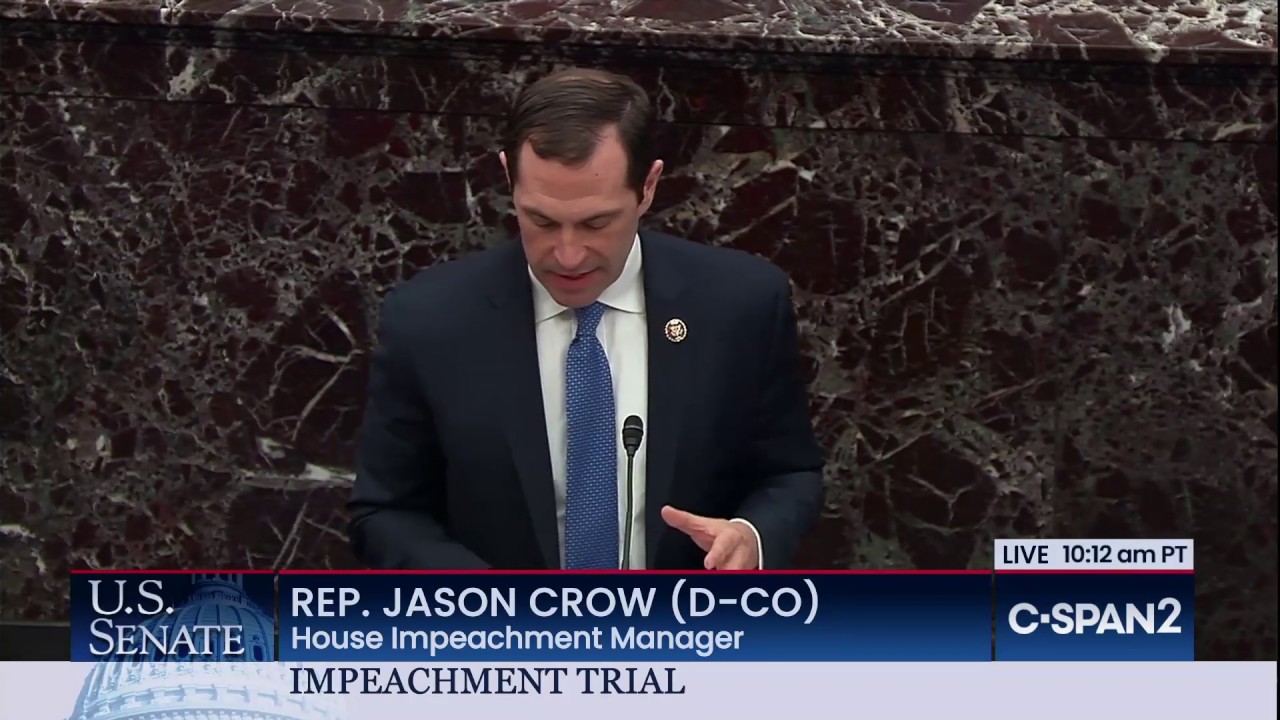 WASHINGTON – Democratic House prosecutors made an expansive case at Donald Trump’s impeachment trial that he abused power like no other president in history, swept up by a “completely bogus” Ukraine theory pushed by attorney Rudy Giuliani.

On Friday, the Democrats will press their final day of arguments before skeptical Republican senators, focusing on the second article of impeachment, obstruction of Congress’ investigation.

Trump’s legal team is expected to begin presenting its defense on Saturday, a fact Trump bemoaned in a Friday tweet, saying “looks like my lawyers will be forced to start on Saturday, which is called Death Valley in T.V.”

As the audience of Senate jurors sat through another long day, and night on Thursday, the prosecutors outlined the charge. They argued that Trump abused power for his own personal political benefit ahead of the 2020 election, even as the nation’s top FBI and national security officials were publicly warning off the theory that it was Ukraine, not Russia, that interfered in the 2016 election.

“That’s what Donald Trump wanted investigated or announced – this completely bogus Kremlin-pushed conspiracy theory,” said Rep. Adam Schiff, the chairman of the House Intelligence Committee who is leading the prosecution, during Thursday’s session.

At the close of the evening Schiff made an emotional plea to senators to consider what was at stake as Trump is accused of seeking Ukrainian probes of political foe Joe Biden and Biden’s son while holding back congressionally approved military aid as leverage.

“Right matters,” he said, quoting Army officer Lt. Col. Alex Vindman who had testified in the House. “Otherwise we are lost.”

The president is being tried in the Senate after the House impeached him last month, accusing Trump of abusing his office by asking Ukraine for the investigations while withholding the aid from a U.S. ally at war with bordering Russia. The second article of impeachment accuses him of obstructing Congress by refusing to turn over documents or allow officials to testify in the House probe.

Republicans, growing tired of the long hours of proceedings, have defended Trump’s actions as appropriate and cast the process as a politically motivated effort to weaken him in the midst of his reelection campaign. Republicans hold a 53-47 majority in the Senate, and acquittal is considered likely.

The Democrats’ challenge is clear as they try to convince not just fidgety senators but an American public divided over the Republican president in an election year.

“No president has ever used his office to compel a foreign nation to help him cheat in our elections,” Rep. Jerrold Nadler of New York, the chairman of the House Judiciary Committee, told the senators. He said the nation’s founders would be shocked. “The president’s conduct is wrong. It is illegal. It is dangerous.”

Democrats scoffed at Trump’s claim he had good reasons for pressuring Ukraine to investigate former Vice President Biden or other political foes.

Rep. Sylvia Garcia of Texas, herself a former judge, aid there is “no evidence, nothing, nada” to suggest that Biden did anything improper in dealings with Ukraine.

Trump, with Giuliani, pursued investigations of Biden and his son, Hunter, who served on a Ukrainian gas company’s board, and sought the probe of debunked theories of what nation was guilty of interference in the 2016 U.S. election.

It’s a story line many in the president’s camp are still pushing. Giuliani, in an appearance Friday on “Fox & Friends,” insisted he would present evidence on his new podcast of “collusion going on in Ukraine to fix the 2016 election in favor of Hillary” Clinton. Pressed by one of the TV hosts as to what that evidence was, Giuliani claimed he had “witnesses” willing to speak on the record next week.

Democrats seemed to be anticipating arguments expected from the president’s attorneys in the days ahead.

At one point, they showed video of a younger Lindsey Graham, then a South Carolina congressman and now a GOP senator allied with Trump, arguing during Bill Clinton’s 1999 impeachment that no crime was needed for impeaching a president. Trump’s defense team is now arguing that the impeachment articles against him are invalid because they do not allege he committed a specific crime.

“We will be putting on a vigorous defense of both facts, rebutting what they said,” and the Constitution, said attorney Jay Sekulow.

During their presentations, Democrats have been summarizing much of the evidence and testimony already presenting during the televised impeachment hearings.

During the dinner break, Sen. John Barrasso, R-Wyo., said it seemed like “Groundhog Day in the Senate.”

The top Senate Democrat, Chuck Schumer, acknowledged that many senators “really don’t want to be here.”

But Schumer said Schiff has been outlining a compelling case that many Republicans are hearing it for only the first time. He contended they can’t help but be “glued” to his testimony..

Senators were permitted Thursday to review supplemental testimony submitted by an aide to Vice President Mike Pence, Jennifer Williams, who was among those who had concerns about Trump’s actions. Democrats said the testimony, which is classified, bolsters their impeachment case. A lawyer for Williams declined to comment.

Holding the room’s attention has been difficult for the Democrats, but senators seemed to pay closer mind to Schiff’s testimony that grew dramatic.

Most senators, even Republicans, sat at their desks throughout the afternoon session, as the rules stipulate, and not as many of them were yawning or standing to stretch as during the previous long nights.

To help senators pass the time, the Republican chairman of the Senate Intelligence Committee, Richard Burr of North Carolina, passed out lunch favors of fidget spinners, stress balls and other toys.

The impeachment trial is set against the backdrop of the 2020 election. Four senators who are Democratic presidential candidates are off the campaign trail, seated as jurors.

A new poll from The Associated Press-NORC Center for Public Affairs Research showed the public slightly more likely to say the Senate should convict and remove Trump from office than to say it should not, 45% to 40%. But a sizable percentage, 14%, said they didn’t know enough to have an opinion.

One issue with wide agreement: Trump should allow top aides to appear as witnesses at the trial. About 7 in 10 respondents said so, including majorities of Republicans and Democrats, according to the poll.

After both cases have been presented, senators will face the question of whether want to call witnesses to testify, an issue that seems all but settled. Republicans rejected Democratic efforts to get Trump aides, including former national security adviser John Bolton and acting chief of staff Mick Mulvaney, to testify in back-to-back votes earlier this week. It’s likely to come up for a Senate vote next week.