Charging that Iran was “fully responsible” for an attack on the U.S. Embassy in Iraq, President Donald Trump ordered about 750 U.S. soldiers deployed to the Middle East as about 3,000 more prepared for possible 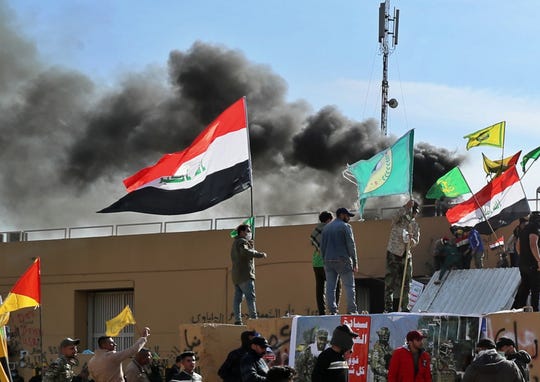 Smoke rises after pro-Iranian militiamen and their supporters set a fire in front of the U.S. embassy in Baghdad, Iraq, Wednesday, Jan. 1, 2020. U.S. troops have fired tear gas to disperse hundreds of pro-Iran militiamen and other protesters who were gathered for a second day outside the American Embassy compound in Baghdad. (AP Photo/Khalid Mohammed) (Photo: Khalid Mohammed, AP)

WASHINGTON – Charging that Iran was “fully responsible” for an attack on the U.S. Embassy in Iraq, President Donald Trump ordered about 750 U.S. soldiers deployed to the Middle East as about 3,000 more prepared for possible deployment in the next several days.

No U.S. casualties or evacuations were reported after the attack Tuesday by dozens of Iran-supported militiamen. U.S. Marines were sent from Kuwait to reinforce the compound.

Defense Secretary Mark Esper said Tuesday night that “in response to recent events” in Iraq, and at Trump’s direction, he authorized the immediate deployment of the infantry battalion from the Army’s 82nd Airborne Division at Fort Bragg, North Carolina. He did not specify the soldiers’ destination, but a U.S. official familiar with the decision said they will go to Kuwait.

“This deployment is an appropriate and precautionary action taken in response to increased threat levels against U.S. personnel and facilities, such as we witnessed in Baghdad today,” Esper said in a written statement.

Additional soldiers from the 82nd Airborne’s quick-deployment brigade, known officially as its Immediate Response Force, were prepared to deploy, Esper said. The U.S. official, who provided unreleased details on condition of anonymity, said the full brigade of about 4,000 soldiers may deploy. 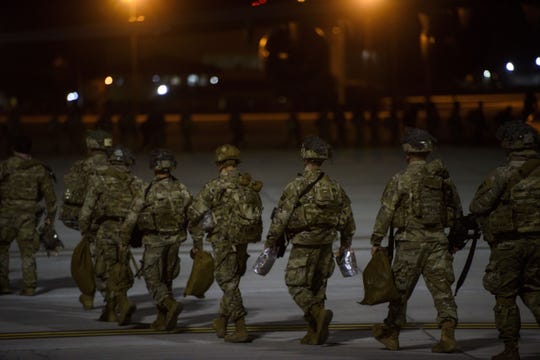 The 750 soldiers deploying immediately were in addition to 14,000 U.S. troops who had deployed to the Gulf region since May in response to concerns about Iranian aggression, including its alleged sabotage of commercial shipping in the Persian Gulf. At the time of the attack the U.S. had about 5,200 troops in Iraq, mainly to train Iraqi forces and help them combat Islamic State extremists.

The breach of the U.S. Embassy compound in Baghdad on Tuesday was a stark demonstration that Iran can still strike at American interests despite Trump’s economic pressure campaign. It also revealed growing strains between Washington and Baghdad, raising questions about the future of the U.S. military mission there.

“They will pay a very BIG PRICE! This is not a Warning, it is a Threat. Happy New Year!” Trump tweeted Tuesday afternoon, though it was unclear whether his “threat” meant military retaliation. He thanked top Iraqi government leaders for their “rapid response upon request.”

American airstrikes on Sunday killed 25 fighters of an Iran-backed militia in Iraq, the Kataeb Hezbollah. The U.S. said those strikes were in retaliation for last week’s killing of an American contractor and the wounding of American and Iraqi troops in a rocket attack on an Iraqi military base that the U.S. blamed on the militia. The American strikes angered the Iraqi government, which called them an unjustified violation of its sovereignty.

While blaming Iran for the embassy breach, Trump also called on Iraq to protect the diplomatic mission.

“Iran killed an American contractor, wounding many,” he tweeted from his estate in Florida. “We strongly responded, and always will. Now Iran is orchestrating an attack on the U.S. Embassy in Iraq. They will be held fully responsible. In addition, we expect Iraq to use its forces to protect the Embassy, and so notified!”

Even as Trump has argued for removing U.S. troops from Mideast conflicts, he also has singled out Iran as a malign influence in the region. After withdrawing the U.S. in 2018 from an international agreement that exchanged an easing of sanctions for curbs on Iran’s nuclear program, Trump ratcheted up sanctions.

Those economic penalties, including a virtual shut-off of Iranian oil exports, are aimed at forcing Iran to negotiate a broader nuclear deal. But critics say that pressure has pushed Iranian leaders into countering with a variety of military attacks in the Gulf.

Until Sunday’s U.S. airstrikes, Trump had been measured in his response to Iranian provocations. In June, he abruptly called off U.S. military strikes on Iranian targets in retaliation for the downing of an American drone.

Robert Ford, a retired U.S. diplomat who served five years in Baghdad and then became ambassador in Syria, said Iran’s allies in the Iraqi parliament may be able to harness any surge in anger among Iraqis toward the United States to force U.S. troops to leave the country. Ford said Trump miscalculated by approving Sunday’s airstrikes on Kataeb Hezbollah positions in Iraq and Syria – strikes that drew a public rebuke from the Iraqi government and seem to have triggered Tuesday’s embassy attack.

“The Americans fell into the Iranian trap,” Ford said, with airstrikes that turned some Iraqi anger toward the U.S. and away from Iran and the increasingly unpopular Iranian-backed Shiite militias.

The tense situation in Baghdad appeared to upset Trump’s vacation routine in Florida, where he is spending the holidays.

Trump spent just under an hour at his private golf club in West Palm Beach before returning to his Mar-a-Lago resort in nearby Palm Beach. He had spent nearly six hours at his golf club on each of the previous two days. Trump spoke with Iraqi Prime Minister Adel Abdul-Mahdi and emphasized the need for Iraq to protect Americans and their facilities in the country, said White House spokesman Hogan Gidley.

Trump is under pressure from some in Congress to take a hard-line approach to Iranian aggression, which the United States says included an unprecedented drone and missile attack on the heart of Saudi Arabia’s oil industry in September. More recently, Iran-backed militias in Iraq have conducted numerous rocket attacks on bases hosting U.S. forces.

Sen. Tom Cotton, an Arkansas Republican and supporter of Trump’s Iran policy, called the embassy breach “yet another reckless escalation” by Iran.

Tuesday’s attack was carried out by members of the Iran-supported Kataeb Hezbollah militia. Dozens of militiamen and their supporters smashed a main door to the compound and set fire to a reception area, but they did not enter the main buildings.

Sen. Bob Menendez of New Jersey, senior Democrat on the Senate Foreign Relations Committee, blamed Iran for the episode and faulted Trump for his “maximum pressure” campaign against Iran.

“The results so far have been more threats against international commerce, emboldened and more violent proxy attacks across the Middle East, and now, the death of an American citizen in Iraq,” Menendez said, referring to the rocket attack last week.

By early evening Tuesday, the mob had retreated from the compound but set up several tents outside for an intended sit-in. Dozens of yellow flags belonging to Iran-backed Shiite militias fluttered atop the reception area and were plastered along the embassy’s concrete wall along with anti-U.S. graffiti. American Apache helicopters flew overhead and dropped flares over the area in what the U.S. military called a “show of force.”

The embassy breach was seen by some analysts as affirming their view that it is folly for the U.S. to keep forces in Iraq after having eliminated the Islamic State group’s territorial hold in the country.

A U.S. withdrawal from Iraq is also a long-term hope of Iran, noted Paul Salem, president of the Washington-based Middle East Institute.

And it’s always possible Trump would “wake up one morning and make that decision” to pull U.S. forces out of Iraq, as he announced earlier with the U.S. military presence in neighboring Syria, Salem said. Trump’s Syria decision triggered the resignation of his first defense secretary, retired Gen. Jim Mattis, but the president later amended his decision and about 1,200 U.S. troops remain in Syria.

Trump’s best weapon with Iran is the one he’s already using – the sanctions, said Salem. He and Ford said Trump would do best to keep resisting Iran’s attempt to turn the Iran-U.S. conflict into a full-blown military one. The administration should also make a point of working with the Iraqi government to deal with the militias, Ford said.

For the president, Iran’s attacks – directly and now through proxies in Iraq – have “been working that nerve,” Salem said. “Now they really have Trump’s attention.”