The couple is following a tradition in Mary Toomey's family of getting married on Christmas Eve.

For generations, members of Mary Toomey's family got married on Christmas Eve, a tradition she and her husband, Ron, continued 70 years ago.

Ron Toomey, 91, said he doesn't know how the practice started but that he and his wife opted to continue her family's custom.

United through a love of music, the William Penn Senior High School graduates will commemorate that journey through a private musical performance before family and friends at their church, the Unitarian Universalist Congregation of York, on Saturday, Dec. 28.

"That was the thing that attracted us to each other, and it has just remained a very important part of our life," Mary Toomey, 90, said.

The celebrations kicked off Tuesday, Dec. 24, on the anniversary itself, with a Moravian Love Feast following the church's 7 p.m. service.

"We find that it is such a place of joy and inspiration," Mary Toomey said of their church, adding that its message of theological inclusivity is probably the "best example of a working democracy."

The couple lives in Mount Wolf and have attended Unitarian Universalist Congregation of York for about 20 years.

"When I bring her home, Ron's waiting up for her. It's so dear," she said.

"They’re very caring people," she added. "I think that when somebody has the good fortune to live that long and still have a good mind, they’re really a gift."

The idea of the love feast came from another previous anniversary celebration, when Mary Toomey's college professor invited the couple to celebrate their anniversary in his Moravian church.

During that celebration, the congregation shared traditional Moravian buns, so the couple decided to provide them for congregants this week in celebration of their love. 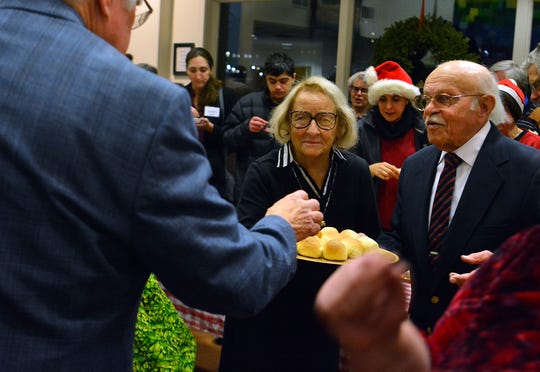 Mary Toomey said that although their long marriage of 70 years might seem unusual, they were both raised on having a partner for life — and music was a strong uniting factor that kept them together every step of the way.

It goes all the way back to when they met, in the high school orchestra, where he was first trumpeter and she was a pianist.

Mary Toomey taught piano for more than 50 years, directed choir for 25 years and was a longtime organist at the couple's previous Methodist church.

More: Yes, Virginia, there is a Santa Claus

Both returned to the York City School District years later — Ron Toomey as director of the arts and Mary Toomey as a substitute teacher. Now retired, Ron Toomey said he'd also been band director for years.

The congregation's director of music, Richard Frey, and the BeaUUtiful TONES trio will be performing songs Saturday that have meant something special to the couple, "kind of a walk through time," Ron Toomey said.

They will perform selections such as "Till There Was You" from "The Music Man," which Ron Toomey directed at William Penn, and "Isle of Capri," a nod to where they spent their 25th anniversary.

Music has "certainly been a central force in our lives," he said.