By LISA MASCARO and MARY CLARE JALONICK
The Associated Press 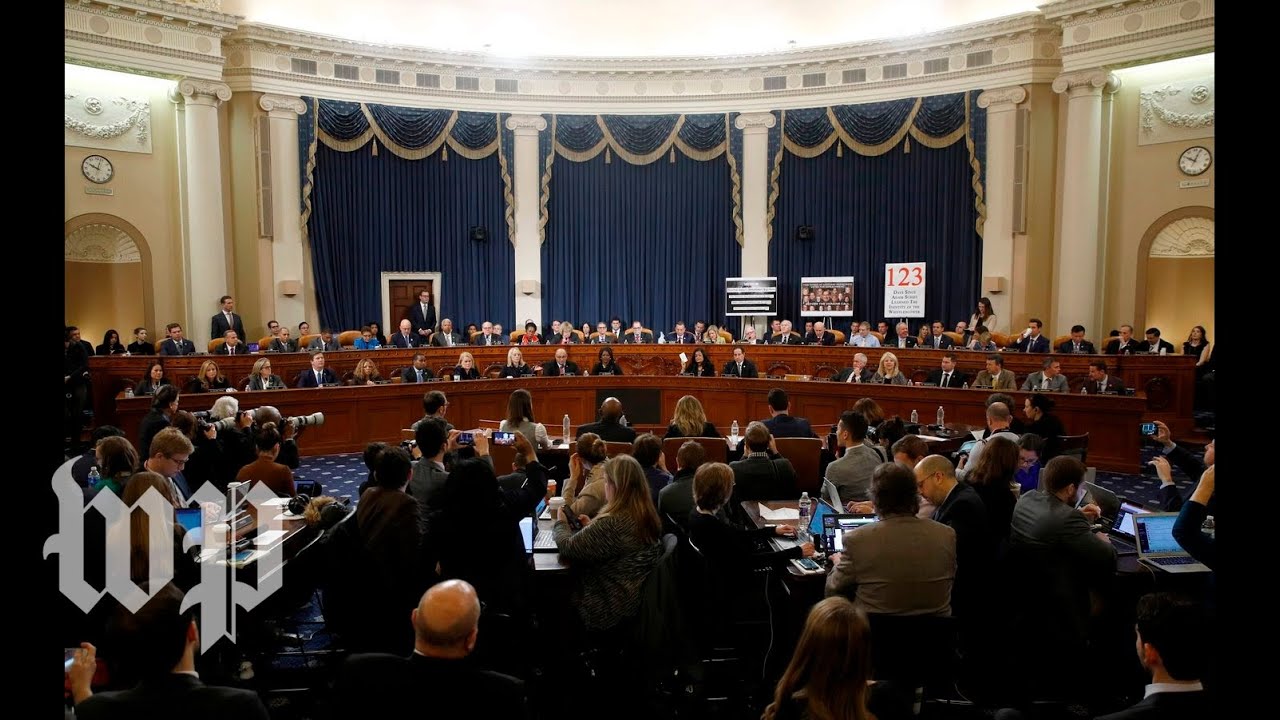 The House is expected to take up the two articles of impeachment next week.

The abuse of power charge stems from Trump's July phone call with the Ukraine president pressuring him to announce an investigation of Democrats as he was withholding US aid. The obstruction charge involves Trump's blocking of House efforts to investigate his actions. Trump has denied wrongdoing.

The vote in the House panel was split along party lines, with 23 Democrats voting in favor and 17 Republicans opposed.

Trump is accused, in the first article, of abusing his presidential power by asking Ukraine to investigate his 2020 rival Joe Biden while holding military aid as leverage, and, in the second, of obstructing Congress by blocking the House's efforts to probe his actions.

Voting came quickly after two days of hearings at the Capitol and a rancorous 14-hour session that was abruptly shut down late Thursday when the Democratic majority refused to be forced, after a long and bitter slog through failed Republican amendments aimed at killing the impeachment charges, into midnight voting. Instead, the impeachment charges against Trump were aired in full view of Americans.

Chairman Jerrold Nadler, D-N.Y., who had said he wanted lawmakers to “search their consciences” before casting their votes, gaveled in the landmark morning session.

Trump took to Twitter early Friday to praise the panel's Republicans, saying “they were fantastic yesterday.”

“The Dems have no case at all, but the unity & sheer brilliance of these Republican warriors, all of them, was a beautiful sight to see,” he tweeted. “Dems had no answers and wanted out!”

THIS IS A BREAKING NEWS UPDATE. AP’s earlier story follows below.

WASHINGTON (AP— The House Judiciary Committee is expected to approve articles of impeachment against President Donald Trump on Friday after abruptly shutting down a 14-hour session late Thursday following a marathon slog through Republican amendments aimed at killing the charges.

Approval of the two charges against the president would send the matter to the full House for a vote expected next week.

But the sudden turn late Thursday punctuated the deep split in the Congress, and the nation, over impeaching the Republican president. The committee, made up of some of the most strident lawmakers, clashed all day and into the night as Republicans insisted on lengthy debate over amendments designed to kill the two formal charges against the president but with no hope of winning votes from the majority Democrats.

“It is now very late at night," Nadler said after presiding over the two-day session. “I want the members on both sides of the aisle to think about what has happened over these past two days and to search their consciences before they cast their final votes.”

Trump is accused, in the first article, of abusing his presidential power by asking Ukraine to investigate his 2020 rival Joe Biden while holding military aid as leverage, and, in the second, of obstructing Congress by blocking the House's efforts to probe his actions.

The Republicans on the panel, blindsided by the move, were livid. When Nadler announced that the committee wouldn't vote until Friday morning, gasps were heard at the dais, and Republicans immediately started yelling "unbelievable" and “they just want to be on TV.” Congress is set to be out of session on Friday, and many lawmakers had other plans, some outside Washington.

"This is the kangaroo court that we’re talking about” stormed Rep. Doug Collins of Georgia, the top Republican on the panel, who said he had not been consulted on the decision. “They do not care about rules, they have one thing, their hatred of Donald Trump. ”

Early Friday, Trump took to Twitter to praise the panel's Republicans, saying “they were fantastic yesterday.”

“The Dems have no case at all, but the unity & sheer brilliance of these Republican warriors, all of them, was a beautiful sight to see,” he tweeted. “Dems had no answers and wanted out!”

Trump is only the fourth U.S. president to face impeachment proceedings and the first to be running for reelection at the same time. The outcome of the eventual House votes pose potentially serious political consequences for both parties ahead of the 2020 elections, with Americans deeply divided over whether the president indeed conducted impeachable acts and if it should be up to Congress, or the voters, to decide whether he should remain in office.

The president insists he did nothing wrong and blasts the Democrats' effort daily as a sham and harmful to America. Republican allies seem unwavering in their opposition to expelling Trump, and he claims to be looking ahead to swift acquittal in a Senate trial.

Speaker Nancy Pelosi sounded confident Thursday that Democrats, who once tried to avoid a solely partisan effort, will have the votes to impeach the president without Republican support when the full House votes. But she said it was up to individual lawmakers to weigh the evidence.

“The fact is we take an oath to protect and defend the Constitution of the United States," Pelosi told reporters. "No one is above the law; the president will be held accountable for his abuse of power and for his obstruction of Congress.”

After slogging through two days of hearings, Democrats on the committee didn’t want to be forced into late-hour voting, a dark-of-night session that could later be used politically against them. As the majority, they wanted to allow Republicans to offer as many amendments and not cut off debate, Democratic aides said. But as the process drew out, Democrats decided they would prefer to pass the articles in the light of day, the aides said.

The president has refused to participate in the proceedings, tweeting criticisms as he did Thursday from the sidelines, mocking the charges against him in the House's nine-page resolution as “impeachment light.” But Pelosi said the president was wrong and the case against him is deeply grounded.

Democrats contend that Trump has engaged in a pattern of misconduct toward Russia dating back to the 2016 election campaign that special counsel Robert Mueller investigated. And they say his dealings with Ukraine have benefited its aggressive neighbor Russia, not the U.S., and he must be prevented from "corrupting" U.S. elections again and cheating his way to a second term next year.

"It is urgent,” Pelosi said.

But Senate Majority Leader Mitch McConnell said late Thursday on Fox News, “There is zero chance the president will be removed from office.” He said he was hoping to have no GOP defections in the Senate trial next year.

The Judiciary Committee session drew out over two days, much of time spent in fights over amendments.

First up was an amendment from GOP Rep. Jim Jordan of Ohio, who tried to delete the first charge against Trump. “This amendment strikes article one because article one ignores the truth,” he declared.

Rep. David Cicilline, D-R.I., argued there was "overwhelming evidence" that the president with his lawyer Rudy Giuliani, in pushing Ukraine to investigate rival Biden, was engaged in an abuse of power "to corrupt American elections.''

Debate on that one amendment lasted for hours before it was defeated, 23-17, on a party line vote. Others like it followed.

Republicans say Democrats are impeaching the president because they can't beat him in 2020. Democrats warn Americans can't wait for the next election because they worry what Trump will try next.

The House is expected to vote on the articles next week, in the days before Christmas. That would send the impeachment effort to the Senate for a 2020 trial.