The chance of hitting a deer, or other large animal, doubles in the fall, the report states, and November has the most claims. 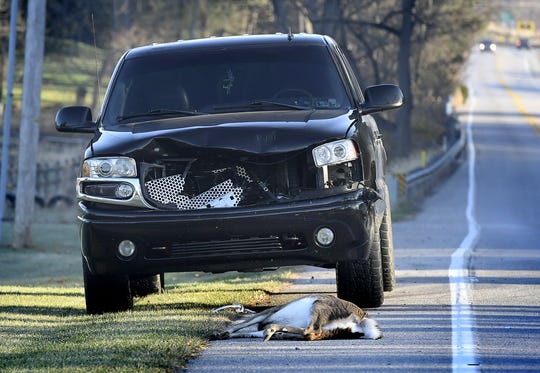 Deer are on the move thanks to mating habits and hunting season. And that means they're more likely to wander into oncoming traffic.

Pennsylvania drivers are the third most likely in the U.S. to collide with a deer, according to an annual report from insurer State Farm. The insurance agency reported that 1 in 63 drivers in the state hit a deer from July 2017 to July 2018.

"Deer aren’t grazers; they’re browsers," he said. "They move with their habitat and their food availability."

But local hunters anecdotally have been calling in and saying they've seen a lot of deer, he added.

This time of year there's always more deer because of hunting season and the species' breeding habits, Zollner said. Both drive deer out onto the roads more often.

The chance of hitting a deer, or other large animal, doubles in the fall, the State Farm report states.

The number of claims peak in November.

Overall, deer collisions in the U.S. dropped slightly to 1.33 million, a decrease of about 100,000 crashes from the prior year, according to State Farm.

The areas where drivers should be most cautious, Zollner said, are rural back roads, because deer are more easily spooked given the proximity to hunting areas. Deer tend to avoid heavy traffic areas with lots of noise.

But even in urban or suburban areas, it's important for drivers to slow down and pay attention, he said.

"When you drive through an area with a playground sign, what do you do?" Zollner said, adding deer, much like children, tend to wander out into the road without looking.