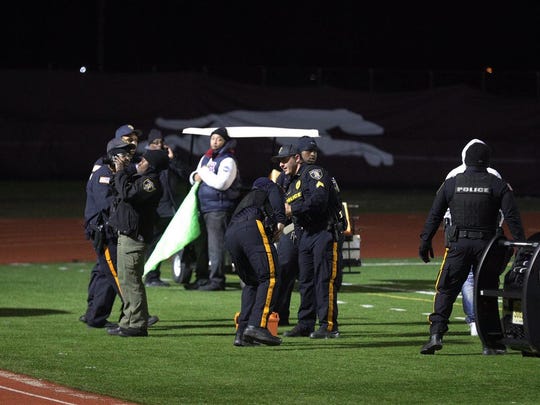 Police investigate the scene after a gunman shot into a crowd of people during a football game at Pleasantville High School in Pleasantville, N.J., Friday, Nov. 15, 2019. Players and spectators ran for cover Friday night when a gunman opened fire at the New Jersey high school football game. (Edward Lea/The Press of Atlantic City via AP) (Photo: Edward Lea / AP)

One of those wounded Friday night was a young boy, who was airlifted to a children’s hospital in Philadelphia “with some serious injuries,” Atlantic County Prosecutor Damon Tyner said. The other was a man.

Panicked spectators and some of the players knocked down a fence in their haste to escape the confines of the field. Some children were separated from their parents, and other parents held babies and young children tight to keep them from being run over by those fleeing, according to Jonathan Diego, who was at the game in Pleasantville, near Atlantic City.

“It was mayhem, literally people coming in waves running away,” said Diego, who helped coach a Pleasantville youth football team involved in a game in which three people were shot and wounded in 2005. All survived. That same team was practicing in 2015 when a spectator was shot but survived.

Friday’s shooting happened at about 8:30 p.m. during the third quarter of a playoff game between the Camden Panthers and the Pleasantville Greyhounds. The stands were packed to watch the Greyhounds, which won its first division title in 43 years this season.

Authorities did not identify shooting victims nor release information on their conditions other than to say both were alive several hours after the shooting.

No one had been arrested as of late Friday, and authorities were investigating whether more than one shooter might have been involved.

Diego said his friend, a retired paramedic, gave first aid to a young boy who was shot.

“He applied pressure to the little boy’s wounds on his neck, trying to slow down the bleeding until the ambulance could come up,” Diego said.

The wounded boy was flown by helicopter to Children’s Hospital of Philadelphia. The adult victim was taken to AtlanticCare Regional Medical Center in nearby Atlantic City.

Videos obtained by The Associated Press show people hitting the ground, running from the bleachers and jumping over chain-link fences as gunfire sounds. At least six gunshots are audible in a video from Jersey Sports Zone, which also shows players stop mid-play, look at the stands and then turn and run.

In a press conference, Tyner referenced a Thursday shooting at a Southern California high school, where a 16-year-old boy killed two students and wounded three others. The shooter died Friday.