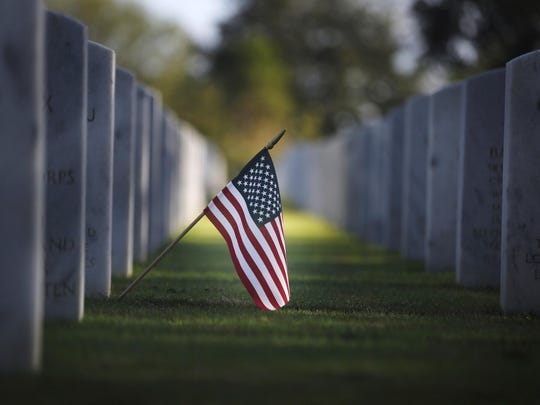 An American flag hangs near a headstone at the South Florida National Cemetery for Veterans Day on Sunday, Nov. 10, 2019, in Lake Worth, Fla. (AP Photo/Brynn Anderson) (Photo: Brynn Anderson / AP)

If you don’t have social media, don’t know why Monday is a federal holiday or have otherwise been living under a rock, Monday is Veterans Day.

Americans have celebrated living and deceased veterans — all those who served the country in any branch of the military — on Nov. 11 since it was first officially marked by Congress in 1926, eight years after World War I ended on what was known as Armistice Day, Nov. 11, 1918. The observance was called Armistice Day for this reason, until President Dwight Eisenhower changed the name in 1954 to be inclusive of all veterans, not just those who served in World War I.

More: Veterans Day 2019: Businesses give back to York County vets

“On that day let us solemnly remember the sacrifices of all those who fought so valiantly, on the seas, in the air, and on foreign shores, to preserve our heritage of freedom, and let us reconsecrate ourselves to the task of promoting an enduring peace so that their efforts shall not have been in vain,” Eisenhower’s proclamation read.

Those who pressed for the change noted that calling it Armistice Day didn’t honor those who had served in World War II or the Korean War.

No apostrophe: Less important, unless you’re a self-declared “grammar guru,” is using the appropriate spelling when honoring those who have selflessly served to protect our nation.

If you were to write “Veteran’s Day,” that’s honoring one veteran with his or her own day.

If you were to write “Veterans’ Day,” that’s a day belonging to all the veterans, which perhaps isn’t wrong in spirit, but is nonetheless grammatically incorrect.

Michael Deas, a lecturer at Northwestern University’s Medill School of Journalism, regularly teaches this to his students.

“It’s a descriptive,” he said, not an indication of ownership. “If you were to use an ‘s apostrophe,’ that would imply that the day belongs to the veterans, that they own the day.”

He said it is comparable to girls and boys restrooms. We don’t add an apostrophe after the “s” on those signs.

“They do not own the restroom,” Deas explained. 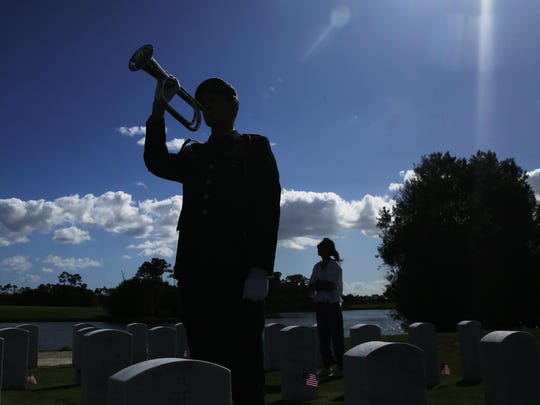 A member of the military plays "Taps" for a family member during a flag ceremony at the South Florida National Cemetery on Veterans Day on Sunday, Nov. 10, 2019, in Lake Worth, Fla. (AP Photo/Brynn Anderson) (Photo: Brynn Anderson / AP)

The living and the dead: Although Veterans Day primarily honors those living and often still-serving members of the military, it certainly remains a day to honor and remember deceased veterans as well. That could lead some to confuse the observation with Memorial Day, which is a day in late May set aside to honor those military personnel who died in the service of the United States, particularly in battle or as a result of injuries suffered in battle. Memorial Day itself has its origins in Decoration Day ceremonies first held in 1868 to honor Civil War dead.

Monday is the 101st anniversary of Armistice Day, the end of World War I, known at the time as the Great War. The armistice went into effect on the 11th hour of the 11th day of the 11th month.

Because Veterans Day was born of Armistice Day, many people were upset when the “Uniform Holiday Bill” was signed in 1968, changing Veterans Day from Nov. 11 to instead be observed on a Monday, in part to promote travel and commerce by providing three-day weekends for federal employees, according to the Department of Veterans Affairs.

“It was quite apparent that the commemoration of this day was a matter of historic and patriotic significance to a great number of our citizens, and so on September 20th, 1975, President Gerald R. Ford signed Public Law 94-97, which returned the annual observance of Veterans Day to its original date of Nov. 11, beginning in 1978,” according to va.gov. “This action supported the desires of the overwhelming majority of state legislatures, all major veterans service organizations and the American people.”

So Veterans Day now is celebrated on Nov. 11 — except when the date falls on a Sunday (as in 2018), and Monday is the federally observed holiday.