Neither Shane Becker nor his wife, Virginia Becker, have been accused of any wrongdoing in the case. 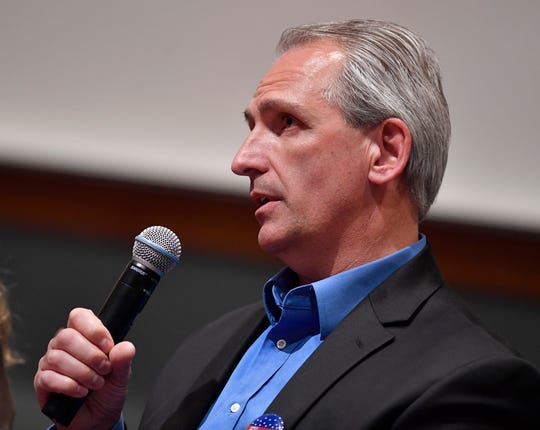 A $149,000 federal tax lien against York County sheriff candidate Shane Becker and his wife is related to unpaid taxes on income collected from Ed4Mil LLC, a now-defunct company that scammed more than $30 million in tax dollars from veterans, Becker confirmed Wednesday.

Becker's brother-in-law, David Alvey, pleaded guilty in 2017 to felony conspiracy to commit wire fraud. He was sentenced to five years in federal prison followed by three years of probation and ordered to pay $24 million in restitution, according to court documents.

"He was the majority shareholder of the business, so I think that’s where it all rests at, and that’s where the issues are at," Becker said Wednesday, Oct. 23.

The lien on Becker's property stems from income Becker and his wife, Virginia Becker, earned while working for Alvey at Ed4Mil.

Neither of the Beckers has been accused of any wrongdoing in the case, and Shane Becker said the case has no bearing on his campaign for sheriff. He's running on the Democratic ticket against Republican incumbent Richard Keuerleber in November's municipal election.

The couple is in the middle of a divorce.

Virginia Becker is listed as a co-owner of the company, along with her brother, Alvey, in a whistleblower complaint filed by a former staffer named Adam Boyce, but she was not named as a defendant in the federal criminal case.

Ed4Mil, short for "Education for Military," presented itself as an online education company to help veterans use their Post-9/11 GI Bill tuition assistance to enroll in online classes at Caldwell University (formerly Caldwell College), a liberal arts school in New Jersey, according to court documents.

The company was based in Lewisberry, according to court records.

Instead of Caldwell courses, the veterans were enrolled in courses at Penn Foster Career School, a correspondence school based in Scranton, Lackawanna County, but the courses were still presented to veterans and service members as Caldwell University courses.

After the students paid the tuition with their GI Bill funds, Caldwell University would siphon 10% and send the remainder to Ed4Mil, the whistleblower complaint states.

Ed4Mil then paid Penn Foster Career School for its lower cost courses and pocketed the difference.

Over the course of the four-year fraud, which lasted from November 2009 to August 2013, the U.S. government paid out more than $35 million in total GI Bill benefits because of the Ed4Mil scam.

In December 2011, a veteran filed a complaint with Veterans Affairs after discovering the connection between the two schools and the major price discrepancy between the Penn Foster tuition and the Caldwell tuition.

Charging documents indicate that Alvey's associate at Caldwell University, one of three co-conspirators, sent an email to Alvey about his concerns.

"I hope the issue that was raised by that one student does not prompt a contact or audit by the VA of these programs," the Caldwell employee wrote, adding that Alvey should insist that Penn Foster remove all of its logos and identifying information from the course website.

Ed4Mil also used fraudulent Caldwell University email addresses and remote phone numbers similar to those at the university to further deceive potential students, according to the whistleblower complaint.

Candidate's response: Becker was in disbelief when Alvey was arrested and the fraud was discovered, and he still feels that way today, he said.

Becker did some construction work at a satellite office the company was opening when he returned from working overseas as a security contractor, he said.

He worked at Ed4Mil for about a year before being hired as a deputy in the York County Sheriff's Office.

"My involvement there was next to nothing, other than just going to the work site and doing my maintenance and construction stuff at a vacant building," he said.

Becker said Tuesday that supporters of his opponent, Sheriff Keuerleber, are trying to dig up dirt on him because the sheriff has been under fire in recent weeks.

More than a dozen current and former deputies, as well as former York County Sheriff Bill Hose, have sharply criticized Keuerleber for what they describe as a hostile and toxic work environment in the sheriff's office.

Becker, a former York County sheriff's deputy and registered Republican who narrowly lost to Keuerleber in the primary, received enough write-in votes to run in the Nov. 5 municipal election as a Democrat.

He left the York County Sheriff's Office in the summer of 2018 to run for sheriff, and he currently works as a sheriff's deputy in Adams County.

Editor's note: This story has been updated to show that Penn Foster Career School is an accredited correspondence school.