York County Democrats are still backing Sandra Thompson for judge despite not knowing what led to her facing a public reprimand from the state Supreme Court disciplinary board. 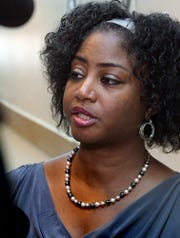 The Democratic Party of York County stands by judicial candidate Sandra Thompson, although the chairman said he does not know why the York City-based attorney is facing a public reprimand from the state Supreme Court disciplinary board.

In a follow-up email, Baker said the statement was not in defense of her, but one of support.

Baker said he does not know what led to the reprimand but added that he didn't think it would affect anyone's vote.

"Her record stands for itself and her experience both in and out of the courtroom has been nothing short of professional," he said. "Regardless of the complaint, I do not believe it to be severe nor do I believe it should be used to campaign against Ms. Thompson."

Thompson, a Democrat, is running against Matt Menges, a Republican, for the position opened by York County Court Judge John S. Kennedy's retirement in 2017.

Baker said that if the misconduct were more egregious, something more severe and swift would occur instead of the reprimand that has been suggested.

It remains unknown what led to Thompson's reprimand. The hearing at which she'll be admonished has not yet been scheduled. The reason for the reprimand will be released following the hearing, according to Stacey Witalec, spokeswoman for the Administrative Office of Pennsylvania Courts.

Thompson did not return messages seeking comment Monday and Tuesday.

According to the disciplinary board's website, a public reprimand is one of five types of public discipline for misconduct. If an attorney is publicly reprimanded, he or she can still continue practicing law.

"I think she should immediately divulge what the charges are," he said.

He said sometimes misconduct can range from honest mistakes to more serious offenses.

“Depending on the seriousness of the charge and how many of them there are ... we certainly would be suggesting that she withdraw from the race," he said.

Piccola, a former state senator, himself was reprimanded by the state Supreme Court's disciplinary board in 2012 for failing to withdraw as counsel when a conflict of interest arose, according to records.

Thompson, a York City-based attorney who is president of the York NAACP and works at her own private law firm, made national headlines when she and four other black women had the police called on them at a Dover Township golf course in April 2018.

They alleged discrimination after former York County Commissioner Steve Chronister, whose family owns the Grandview Golf Course, called the police on them after the five wouldn't leave. He said he believed they were playing too slowly and were delaying other golfers.