The county is still far below last year's count of 600 mosquitoes that tested positive for the virus. 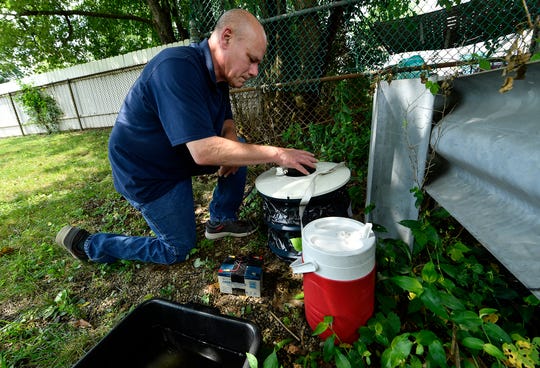 Lee Graybill, program administrator of the Mosquito Surveillance Program in York County, places mosquito traps at a location off of Roosevelt Avenue in York, Wednesday, August 14, 2019. Captured mosquitoes will be tested for West Nile Virus. John A. Pavoncello photo (Photo: The York Dispatch)

The samples were collected Thursday, Sept. 12.

This is the sixth round of samples in York County to test positive for the virus in 2019, but the county is still far below the number of mosquitoes that tested positive for West Nile in 2018, said Lee Graybill, administrator for the county's mosquito surveillance program.

"At this time last year, we had over 600," he said. "Last year was a huge year and a record year for York County, and this year is very low in comparison."

Mosquito season will be over in another two or three weeks when the temperatures cool down, Graybill said.

The York County Mosquito Surveillance Program and state Department of Environmental Protection have been testing additional samples and reducing larval populations in the those areas.

Graybill has collected other positive samples this summer from Conewago, Fairview and Manchester townships and Hanover.

The best way to control the mosquito population is for residents and property owners to clean up debris on their property and eliminate standing or stagnant water that collects in swimming pools, discarded tires or other containers, according to a news release.

York County residents should take precautions when spending time outdoors, such as wearing insect repellent or bringing a portable fan outside to keep mosquitoes away.

Residents who have concerns about mosquitoes in their area can submit a report through the Pennsylvania West Nile virus website at westnile.state.pa.us or contact the York County Mosquito Surveillance Program by calling 717-840-2375 or emailing LMGraybill@yorkcountypa.gov.