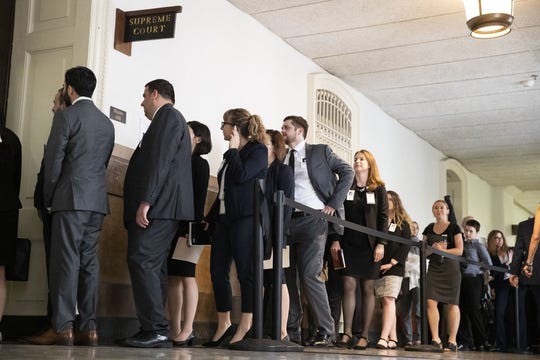 Philadelphia District Attorney Larry Krasner opposes the death penalty and is a driving force behind the court challenge. He says that two-thirds of the 155 death sentences handed down in Philadelphia over the past 40 years were later overturned on appeal.

Just under half of the 137 men on death row in Pennsylvania are black, compared to 11% of state residents. Krasner says that 82% of the condemned men from Philadelphia are black. There are no women on Pennsylvania’s death row.

The test case involves two men sentenced to death row in the 1990s — Jermont Cox, of Philadelphia, and Kevin Marinelli, of Northumberland County. Relatives of Marinelli’s victim, who was killed over a stereo during a 1994 home invasion robbery, oppose the appeal.

Pennsylvania Attorney General Josh Shapiro and the state District Attorneys Association also oppose the appeal, saying critics should urge lawmakers to enact reforms recommended in a study last year, not ask the court to throw out the statute.

“The questions the report raises are important, and should be thoroughly considered and resolved, by the General Assembly,” Shapiro’s office said in its brief.

Only three people have been executed in Pennsylvania since capital punishment was reinstated in 1978, the last of them in 1999. Meanwhile, Democratic Gov. Tom Wolf put a moratorium on executions when he took office in 2015.