The 22-year-old from Toronto was, as she put it “thrown into the fire,” by working a game between Pittsburgh Penguins and Boston Bruins prospects. Aside from calling offside and icing and handling faceoffs, the 5-foot-10 Welsh was unafraid to get in the middle of several post-whistle scrums. 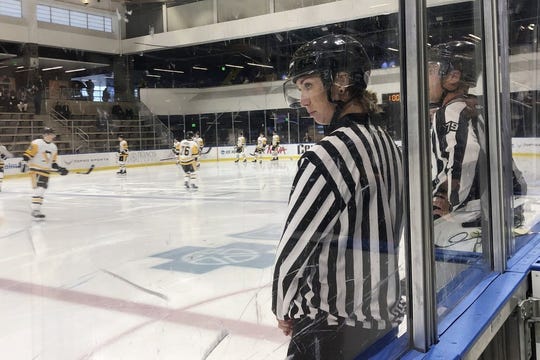 Linesman Kirsten Welsh watches at center ice as Pittsburgh Penguins and Boston Bruins players take the ice to prepare to play in the Sabres prospects hockey tournament, Friday, Sept. 6, 2019, in Buffalo, N.Y. Welsh is one four female officials selected to be the first women to work as on-ice officials at several prospect tournaments taking place across the country this weekend. The other three other women selected were Katie Guay, Kelly Cooke and Kendall Hanley. Photo by John Wawrow (Photo: Associated Press)

BUFFALO — Once the butterflies and adrenalin rush of officiating her first NHL prospects game subsided, Kirsten Welsh woke up Saturday eager to get back on the ice again.

Whatever miscues Welsh made and hesitancy showed during her debut at the Buffalo Sabres prospects tournament a day earlier were overshadowed by how much she enjoyed the experience. There was also the realization she might have a future as an NHL linesman — or is it lineswoman?

“I just think this is what I love. This is what I’ve always been about,” Welsh told The Associated Press by phone before preparing to officiate her second tournament game Saturday. “Having the opportunity to pursue this is just unbelievable. I can’t tell you how thankful I am.”

The 22-year-old from Toronto was, as she put it “thrown into the fire,” by working a game between Pittsburgh Penguins and Boston Bruins prospects. Aside from calling offside and icing and handling faceoffs, the 5-foot-10 Welsh was unafraid to get in the middle of several post-whistle scrums.

“I think the guys were kind of thrown off that a girl was rushing in there to break them up,” said Welsh, who completed a four-year college career playing defense at Robert Morris last season. “I got smushed in the boards yesterday, too. It’s fun. I just think it’s so great to be out there with them and being able to be on the ice with all these amazing athletes.”

Welsh has the potential of becoming a trailblazer in a role that’s been exclusively reserved for men at the NHL level until Friday. That’s when the league announced Welsh was one of four women selected for the first time to officiate the league’s various prospect tournaments held around the nation.

Welsh is joined by Katie Guay and Kelly Cooke, who were selected as referees to work tournaments in Anaheim, California, and Nashville, Tennessee. Kendall Hanley was assigned to work as a linesman at the Detroit Red Wings tournament in Traverse City, Michigan.

The four were chosen after being among 89 participants — 11 of them women — at the NHL’s annual officials scouting combine in Buffalo last month. And they become the first women assigned to work on the ice in a competitive NHL setting.

All four are considered candidates to eventually break the NHL’s officiating gender barrier, which has become a point of emphasis stressed by commissioner Gary Bettman and the league’s director of officiating Stephen Walkom.

The NBA has had female officials since Violet Palmer and Dee Kantner were hired in 1997. Sarah Thomas was the NFL’s first female official in 2015. Pam Postema, in 2000, was the first female to umpire a Major League Baseball spring training game, and there are at least two women currently working at the Triple-A level.

Al Kimmel, the NHL’s director of scouting and development for officiating, told The AP last month the growth of women’s hockey has led to a surge of candidates.

“In my six years here, the growth and improvement of the on-ice and off-ice abilities match some of the men and surpass some of the men,” Kimmel said. “We’ve got some high-caliber women officials here that have world-class experience that are going to show some of the boys some things out there.”

Guay is the most experienced of the four. Her 14-year officiating career includes working women’s games at last year’s Winter Olympics, college hockey men’s games and being part of the first all-female officiating crew to work the women’s Frozen Four championship last spring.

Her lifelong objective was limited to working the Olympics, before finally realizing the possibility of working in the NHL.

“I think it’s huge,” she said last month, of the chance of being selected to work an NHL prospects game. “I think any time people are given a chance and new paths are formed, it opens eyes for others to kind of dream bigger.”

Welsh’s debut wasn’t spotless. Admitting to being nervous, Welsh said she needs to be more assertive in her calls and more in control of players during faceoffs.

“It’s really being firm, like kicking them out of the faceoff if that’s the case, don’t let them get away with (stuff) because I’m a girl,” she said.

Welsh was grateful for the positive support she received from her fellow on-ice officials and league supervisors, who immediately went over her tape to provide tips on what she needs to improve. She also leaned on the support of former Robert Morris player, Brandon Blandina, who made his NHL officiating debut last season.

Welsh was particularly encouraged by Penguins undrafted prospect Chase Berger congratulating her by shaking her hand following the game.

“I literally had to say, ‘Wow. Thank you. You have no idea how much that means to me,’” she recalled.

“It didn’t change anything. It’s a linesman. It doesn’t matter if it’s a boy, girl, they blow the whistle, the plays dead. Nothing changes,” Zech said. “She’s got the same jurisdiction of any linesman in the National Hockey League or anywhere. Hockey’s hockey.”

Bruins minor-league coach and former NHLer Jay Leach was impressed by how Welsh kept up in what was a fast-paced game.

“I thought she may have missed a couple of calls, but we all miss a couple of calls. It happens,” Leach said. “That’s an intense game, and there’s a lot of people watching, and she did a nice job.”

He had no trouble envisioning a women NHL official, by noting the keys to the job are skating and communicating.

Leach then broke into a smile upon mentioning communication, saying: “As my mother would tell me, women are much better at that than men.”

Welsh wasn’t sure what her future held upon completing her college career until an assistant coach raised the possibility of officiating last season. Though she landed a job with an oil and gas company in Pittsburgh in May, Welsh made a commitment to attend the officials combine.

Welsh laughed in acknowledging she might have a career choice to make one day.

“It’s a balance, and obviously my heart is with hockey, so we’ll just see how far it takes me,” Welsh said. “I’m kind of just riding the wave and trying my hardest to see where it takes me.”