The breakdown puts the first federal trial over the opioid epidemic on track to begin next month and sets the state for a complex legal drama involving more than 30 states and 2,000 local governments. 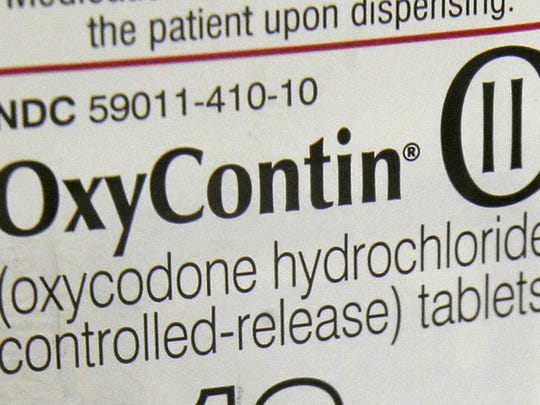 FILE - This Feb. 19, 2013, file photo, shows a portion of the label for OxyContin pills in Montpelier, Vt. On Thursday, Aug. 31, 2017, safety advocates and state health officials filed a petition calling on the U.S. Food and Drug Administration to ban high-dose opioid painkillers to prevent accidental overdose deaths among patients and people who abuse drugs. The petition singles out the OxyContin 80 milligram tablet, which is taken twice daily, adding up to 240 morphine-equivalent milligrams. It seeks a ban on other high-dose opioid tablets and under-the-tongue films. (AP Photo/Toby Talbot, File) (Photo: Toby Talbot / AP)

CLEVELAND - OxyContin maker Purdue Pharma is expected to file for bankruptcy after settlement talks over the nation's deadly overdose crisis hit an impasse, attorneys general involved in the talks said Saturday in a message to their counterparts across the country.

The breakdown puts the first federal trial over the opioid epidemic on track to begin next month and sets the state for a complex legal drama involving more than 30 states and 2,000 local governments.

Purdue, its owners, the Sackler family, and a group of state attorneys general had been trying for months to find a way to avoid trial and determine Purdue's responsibility for a crisis that has cost 400,000 American lives over the past two decades.

The email from the attorneys general of Tennessee and North Carolina said that Purdue and the Sacklers had rejected two offers from the states over how payments under any settlement would be handled and that the family declined to offer counterproposals.

"As a result, the negotiations are at an impasse, and we expect Purdue to file for bankruptcy protection imminently," they wrote in their message, which was sent to update attorneys general throughout the country on the status of the talks.

Purdue spokeswoman Josephine Martin said, "Purdue declines to comment on that in its entirety."

A failure in negotiations sets the stage for one of the most complex legal dramas in the nation's history. It would leave virtually every state and some 2,000 local governments that have sued Purdue to battle it out in bankruptcy court for the company's remaining assets. Purdue threatened to file for bankruptcy earlier this year and was holding off while negotiations continued.

It's not entirely clear what a breakdown in settlement talks with Purdue means for the Sackler family, which is being sued separately by at least 17 states.

Those lawsuits are likely to continue but face a significant hurdle because it's believed the family - major donors to museums and other cultural institutions around the world - has transferred most of its multibillion-dollar fortune overseas.

In March, Purdue and members of the Sackler family reached a $270 million settlement with Oklahoma to avoid a trial on the toll of opioids there. The Sacklers could not immediately be reached for comment on Saturday.