Purdue Pharma and its owners, members of the Sackler family, already reached a $270 million settlement in Oklahoma.

York County could move into settlement negotiations in its lawsuit against opioid         manufacturers, distributors and prescribers, depending on the outcome of a separate case between Purdue Pharma and more than 2,000 other litigants.

Purdue, the Stamford, Connecticut-based maker of OxyContin, is "in active settlement talks" with state attorneys general and attorneys representing local governments to reach a $10 billion-$12 billion agreement and avoid going to trial in federal court, The Associated Press reported Wednesday.

"That decision may impact our case in that the pharmaceutical companies may enter into serious settlement negotiations to avoid a trial in our matter," said Mark Walters, spokesman for York County.

Th federal trial in Ohio is scheduled to begin in October, the AP reported.

The complaint alleges that the defendants' corporate greed and disregard for the known risks of addiction and abuse associated with long-term use of prescription pain medication led to the opioid crisis in York County.

"In order to expand the market for opioids and realize blockbuster profits," the complaint states, "Defendants needed to create a sea change in the medical and public perception that would permit the use of opioids not just for acute and palliative care but also for long periods of time to treat more common aches and pains, like lower back pain, arthritis, and headaches."

Reports of Purdue's settlement talks come on the heels of a  landmark ruling against Johnson & Johnson in Oklahoma, where a judge ordered the company to pay $572 million in restitution for its role in the state's deadly opioid crisis.

It was the first ruling of its kind to hold a drug company culpable for contributing to the opioid epidemic, the Washington Post reported.

The AP also reported that Purdue Pharma and its owners, members of the Sackler family, already reached a $270 million settlement in Oklahoma in order to avoid a trial there.

The parties reached that agreement in March. 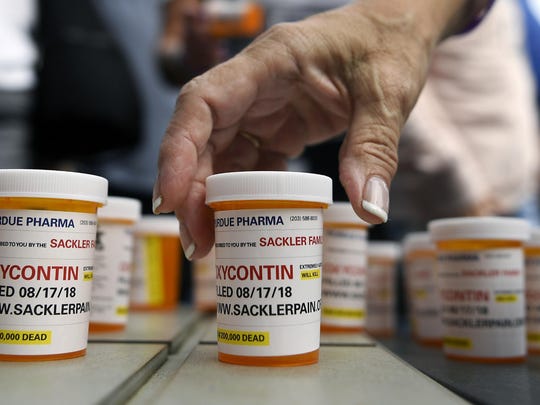 FILE - In this Aug. 17, 2018, file photo, family and friends who have lost loved ones to OxyContin and opioid overdoses leave pill bottles in protest outside the headquarters of Purdue Pharma, which is owned by the Sackler family, in Stamford, Conn. New York is suing the billionaire family behind Oxycontin, alleging the drugmaker fueled the opioid crisis by putting hunger for profits over patient safety. (AP Photo/Jessica Hill, File) (Photo: Jessica Hill / AP)

York County consolidated its case with other Pennsylvania counties and transferred it to Delaware County in May 2018, where the suit is still pending.

Seventy people in York County have died from opioid overdoses in 2019, according to the most recent data from the York Opioid Collaborate.