Buttigieg, like no other Democrat seeking the 2020 presidential nomination, is trying to demonstrate that there’s a strong religiosity among Democrats , too. 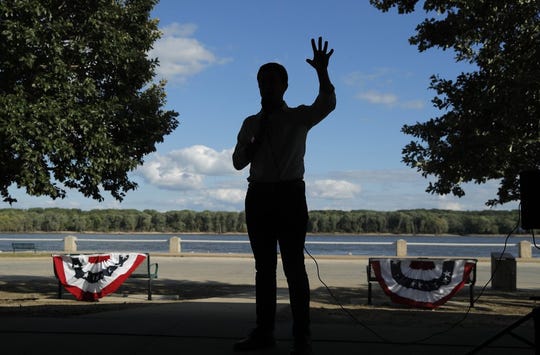 In this Aug. 14, 2019, file photo, Democratic presidential candidate South Bend Mayor Pete Buttigieg speaks at a campaign event along the Mississippi River in Keokuk, Iowa. Buttigieg is making a faith-based appeal to Democratic voters as he tries to demonstrate his party’s religiosity. Photo by John Locher (Photo: The Associated Press)

KEOKUK, Iowa — The question was about climate change. The answer soon turned to the Bible.

And Pete Buttigieg knew the verses.

“There’s a lot about the stewardship of creation that is in Scripture that I don’t see being honored by the administration right now, not to mention the stuff about loving your neighbor and taking care of the least among us and feeding the poor,” the South Bend, Indiana, mayor said. The crowd of about 250 at a Mississippi River park in southeastern Iowa this month erupted with cheers.

Republicans for a half century have built a loyal following among white evangelical Christians. But Buttigieg, like no other Democrat seeking the 2020 presidential nomination, is trying to demonstrate that there’s a strong religiosity among Democrats , too.

President Donald Trump’s reelection fortunes are rooted deeply in the unshakable support among religious conservatives . But Buttigieg’s regular references to his own Christian faith offer a counterweight that could be an influential asset in Iowa and beyond as Democrats parry the secular labels that Republicans have tried to apply to them.

“What Pete said about welcoming the stranger, visiting those in prison, that’s what Jesus calls on us to do,” said the Rev. Elizabeth Bell, a Methodist pastor in Burlington who attended a mid-August event for Buttigieg in that city.

During a two-day trip through eastern Iowa counties that Trump won in 2016 but that Democrat Barack Obama carried in 2008, Buttigieg was invited to discuss his faith in backyards, riverside parks, vintage hotels and town squares.

Not since Bill Clinton has a Democratic presidential candidate leaned so heavily on religious references in everyday campaign events, though Buttigieg says he’s wary of coming off as overly pious.

“My goal is for people of faith who believe that it has some implications for how they participate in politics to be aware that they have choices,” Buttigieg told The Associated Press. “I want people to know that when I say I’m guided by some of these ideas, it’s not something I seek to impose on anybody else. But I do want people to know that’s part of my formation, part of how I come at the world.”

During his trip, Buttigieg was asked, unprompted, at almost every stop about how his religion informs his public policy.

Jim Thicksten, a DeWitt car dealer, asked if he planned to try to peel off voters from the Christian right.

Buttigieg said the opportunity is greater than ever, given the dissonance between Trump’s record and Christian teachings, to show all voters that Republicans are snubbing the Bible’s teachings on caring for the poor. “It’s an offense to not only our values but their own,” Buttigieg told Thicksten.

Thicksten would know. He backed former Arkansas Gov. Mike Huckabee’s 2008 winning Republican Iowa presidential caucus campaign only to change his party affiliation to Democrat after a bitter school book banning debate that deeply hurt some of his gay friends.

“I’ve heard him on numerous occasions be able to explain the left-leaning notions of faith and put them into terms I feel like people on the right might understand,” Thicksten said of Buttigieg.

Buttigieg says there’s room to invite conservative Christians disappointed by Trump into his caucus campaign, but he is more focused on drawing Christians who may feel abandoned by Democrats’ who avoid religion in a political context.

Faith is an important cultural signal to voters, especially Democrats who have deep doubts about Trump’s character. Buttigieg’s own nontraditional route to his religious home followed a path nearly as unexpected as the 37-year-old gay married mayor’s leap into the 2020 Democratic top tier.

Raised by a former Roman Catholic-priest father and a religious but skeptical mother, Buttigieg attended a Catholic high school in South Bend. Attending services irregularly at Harvard, he was drawn to the Church of England as a Rhodes scholar, first for the intellectual appeal, then as a spiritual refuge “for the humbling that goes on when you wind up at a place like Oxford,” he said.

The Episcopal Church, the Anglican Church’s U.S. counterpart, fit when he returned to the states and joined St. James in South Bend, where he married his husband, Chasten, last year.

It’s that progressive Christian element Buttigieg hopes to capture in a crowded Iowa candidate field, where a niche advantage can make a vital difference.

His campaign recently hired the Rev. Shawna Foster to be his faith outreach coordinator, the first such hire of any 2020 Democratic campaign. Among Foster’s duties will be reaching LGBTQ-friendly churches, an untapped potential resource.

And for Buttigieg, who in South Carolina is registering scant support among the African American voters who form a majority of that early primary’s electorate, his ease with Scripture could help him open the door, especially among churchgoing women.

A Pew Research Center survey conducted in late July and early August found 15% of white mainline Protestant Democrats said they preferred Buttigieg in the primary contest in an open-ended question. That’s compared with 0% of black Protestants.

“There’s no question that a very important part of engaging many black audiences is through faith because the church is such an important structure holding black communities and families up,” Buttigieg said. “It does mean that there’s a way to reach people and find some common ground.”

With just over five months until the caucuses, there is time.

“I feel like he actually lives the words that he says,” said volunteer Robin Gingrich, a retired test administrator from West Branch. “I think when he says he’s a Christian and he loves God, he proves it every day by the way he lives his life. I feel like he’s a therapist for America. He gives us hope.”