After 70 years, Kleffel's will close its doors

Hanover will lose a piece of its history as longtime department store Kleffel’s — a community staple for 70 years — prepares to close its doors.

After 70 years, Kleffel's will close its doors 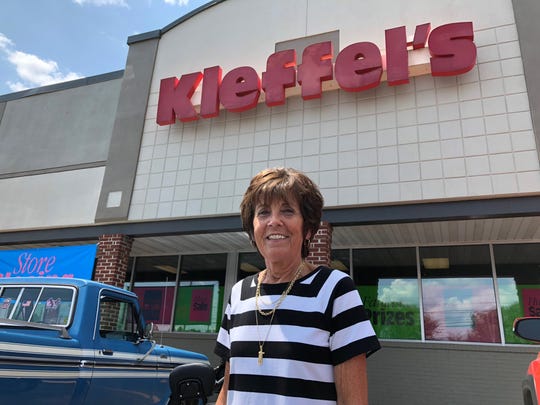 Sally Grim, manager of longtime Hanover department store Kleffel's, reflects on her 45 years at the company as it prepares to close its doors. A final sale began Thursday, July 25, and customers will be able to log shopping points towards a prize giveaway Sept. 7. (Photo: Lindsay C. VanAsdalan)

Hanover will lose a piece of its history as longtime department store Kleffel’s — a community staple for 70 years — prepares to close its doors.

Many customers in Hanover and beyond flocked to the local business for decades because of its quality, personal touch and sought-after brands that could not be found just anywhere.

"I've been coming to Kleffel's for 40 years, back when they were on Baltimore Street," said local resident Terry O'Bradovic. "They just had a lot of things that nobody else had."

Kleffel's started out as an army surplus store in downtown Hanover when Gus Kleffel opened for business in 1949, and it kept expanding until it stretched the whole block, said manager Sally Grim, a 45-year employee.

"Kleffel’s was one of the first stores to carry Levi’s in town," Grim said, and people came from out of town to shop, especially for the wide selection of denim.

They loved the "pants club," she said, in which they could buy 10 pairs of pants and get the 11th one free. Employees would record their purchases on index cards filed at the store, and one woman who came in recently had her card from 1980, Grim said.

An old sign for the "Pants Club" sits on shelves behind the counter at Kleffel's in Hanover. Employees would track purchases on index cards that were stored in boxes at the store — several of which were saved after a fire damaged the original building in 1990. Today, as the store prepares to close, customers can redeem their pants cards for points toward a prize giveaway Sept. 7. (Photo: Lindsay C. VanAsdalan)

When a ceiling light caught fire and left the store damaged in 1990, "it missed the pants cards by that much," she said, holding her hands about a foot apart.

Even today, as customers stopped in on Friday, July 26, they were coming for brands such as Wrangler, Woolrich, Columbia and Pendleton.

"He doesn't know where else to get his overalls," said local resident Madison Halpenny, who noted her brother was excited to come by for the store's final sale.

Grim said the closure comes down to a lack of business, as bigger stores and online competition draw customers away — a trend that can be seen as other department stores such as Boscov's and The Bon-Ton struggle to stay afloat.

More:What's next for Boscov's after retail titan's death

Kleffel's was known for its homecoming and prom dresses, said Logan Mara, of Hanover, but prices were higher than some bigger stores.

"Everybody wants ... convenience," said Shelly O'Bradovic, instead of being able to touch and feel at a brick-and-mortar store.

Kleffel's relocated to the Clearview Shopping Center, at 1000 Carlisle Street, following the fire, and it downsized two years ago from a space that used to extend next door, Grim said.

Dedicated employees have helped to keep Kleffel’s around as long as it has been, she said, and customers touted the service and personal approach of the department store and other local businesses like it.

It's hard to find anything at Walmart, said Chris Wildasin, of Hanover, but at Kleffel's, "You come in, and if you know your size, you go right to it — you get what you want," she said.

Elaine Feree, of Berwick Township, Adams County, said the denim quality, for example, is better at Kleffel's, as bigger stores don't always have pairs that are true-to-size, with appropriate stitching and ounces.

Neon signs hang in longtime Hanover department store Kleffel's — which has been a staple in town for 70 years. The store is holding a final sale before it goes out of business, which began Thursday, July 25. (Photo: Lindsay C. VanAsdalan)

A prize promotion is available during the store's final sale, with big-ticket items such as a television, a video security system and a robot vacuum. Winners will be announced Sept. 7, Grim said. A final closure date has yet to be announced, she said.

A woman stepped up to the signup table on Friday. She was No. 307 — and the sale had just started Thursday, July 25. Every purchase adds points, and those who rack up the most points win.

Grim said the idea was to "give some oomph" and go out on an upbeat note.