The sheriff came under fire this week for allowing the CEO of United Fiber & Data to park in the courthouse's secure basement lot for his protection from abuse order hearing. 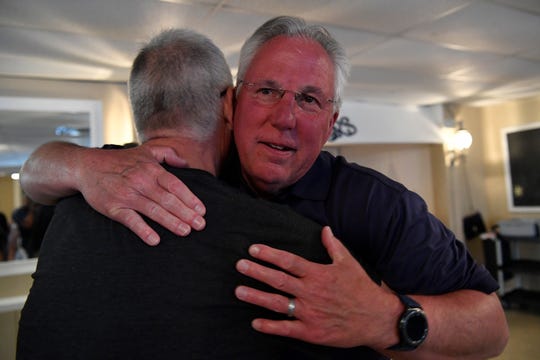 Incumbent Sheriff Richard Keuerleber gets a hug after winning the primary, Tuesday, May 21, 2019. John A. Pavoncello photo (Photo: The York Dispatch)

The man looking to oust York County Sheriff Richard Keuerleber from office in November said that lapses in security at the courthouse are the reason he decided to run for sheriff. But Keuerleber brushed off any concerns that recent events might damage his reelection bid.

The sheriff came under fire this week for allowing Bill Hynes, CEO of United Fiber & Data, to park in the secure basement lot under the York County Judicial Center for his protection from abuse order hearing on July 15.

Shane Becker, a former York County sheriff's deputy who narrowly lost the Republican primary to Keuerleber in May, is running as a Democrat in the general election.

"This is one incident that actually surfaced where it made news," Becker said Wednesday.

Becker left the York County department last summer in order to run against Keuerleber. He said there were other security breaches during his time with the department that concerned him and his fellow deputies but that the public never learned about them.

The Democratic challenger declined to get into specifics about those other alleged incidents because he said discussing them could also put the building's security at risk.

Keuerleber declined to discuss the political fallout that might come with the controversy.

"I don’t get into hypotheticals," he said. "I let my record speak for itself."

Hynes' ex-girlfriend filed a temporary PFA against him on July 9 in which she alleged that Hynes stalked her, assaulted her and repeatedly threatened to kill her.

The petition also states that Hynes owns guns, despite pleading guilty to third-degree felony theft by deception in Northampton County in 2010, according to court records, which prohibits him from possessing firearms.

The temporary PFA was granted at the July 15 hearing, according to court records.

But the York County Board of Commissioners disagreed, calling the incident a “dereliction of duty” and a departure from the county's established security protocols in a joint statement released Tuesday.

"The breach allowed a defendant with an active Ex Parte Protection from Abuse Order against him to park in a secure area," the commissioners stated.

Keuerleber told The York Dispatch on Tuesday that Hynes has donated money to the sheriff's office to help fund its K-9 program and that during his July 15 visit to the judicial center he visited K-9 Dargo.

The sheriff said Hynes has parked in the secure lot a few other times to visit Dargo.

Hynes has never contributed to Keuerleber's reelection campaigns, according to campaign finance records.

The sheriff's department has made a lot of security enhancements over the past 12 years while Keuerleber has been in office, the sheriff said Thursday.

"Security can always be upgraded, and different policies and procedures can be implemented, but we didn’t violate any policies or procedures," he said. "And I had the authority to do that."