Many locals took action on July 14 as a multi-home fire damaged four houses. 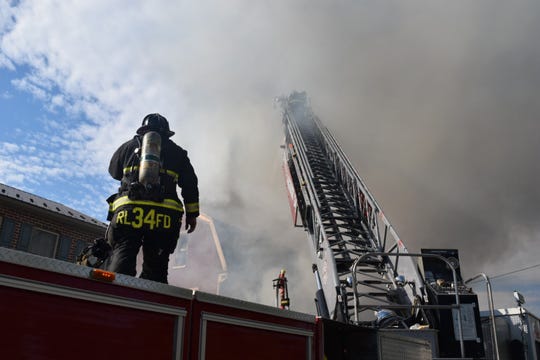 Dwayne Snell first thought he had come across a barbecue on Sunday while out on a motorcycle ride with his nephew.

Instead, Snell found himself at the scene of a fire in Red Lion that gutted multiple houses.

"I stopped and asked if everyone was out of the house," Snell, of Windsor Township, said. "One woman still had a cat in her house. ... I was very determined to find the cat."

Snell entered the home determined to fetch the cat. Fire had not yet reached that house, though smoke was entering from all sides.

After chasing the cat around the house for a bit, Snell managed to grab it by its tail and bring it outside.

"I just felt like I had to do anything I could do," Snell said. "It just seemed like the right thing to do. I love cats myself."

Snell wasn't the only one who wanted to help those affected by the fire.

A GoFundMe was started by Red Lion resident Ashley Zeigler to assist those who lost their homes.

"What do you say to somebody who is watching their life go up in flames?" Zeigler said in a phone interview. "It's sad that this happened, but Red Lion has really come together."

"I live in the community and my heart breaks for these families. I was there and it was a horrific sight," said Michelle May via the GoFundMe page.  "I can’t even imagine what they are all going through."

In addition to monetary donations, Zeigler said donations of clothing, hygiene products and gift cards are being accepted.

Monetary and gift card donations can be dropped off either at The Sugar Rose Bake Shop, located at 157 E. Broadway, or Musso's Pizza, at 406 E. Broadway.

Clothing donations can be dropped off at 1st Avenue Collision, located at 224 First Ave.

Zeigler said for anybody looking to stay up-to-date with future updates regarding the fire should join the Facebook page "It Takes A Town To Roar."

"I'm proud to say I'm from Red Lion," Zeigler said. "This is our shining moment."