Wolf issued the veto Friday. It passed the Republican-controlled Legislature last week barely hours after Republicans combined the different elements into one bill. 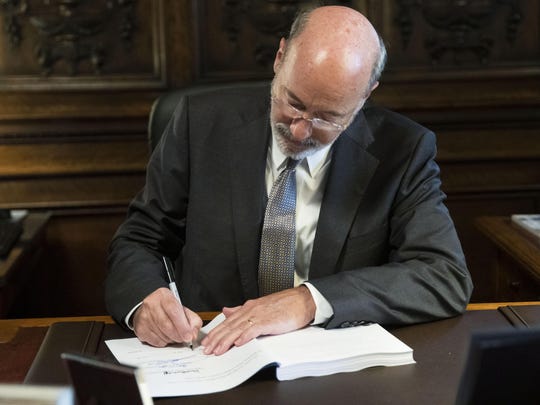 In a statement, Gov. Tom Wolf said he remained committed to helping counties pay for voting machines, but he did not say how he might come up with the money without approval from the Republican-controlled Legislature.

York County became one of the first counties to solidify a deal for new machines last month, signing a $1.4 million contract with Dominion Voting Systems. The county now uses older systems by the same company.

"They made a commitment, and they need to live up to that commitment," Reilly said. "If we have to eat that, we understand that. We don't have a choice in the matter anymore."

Wolf began pressing counties last year to replace their voting machines after federal authorities warned Pennsylvania and at least 20 other states that Russian hackers targeted them during 2016’s presidential election.

More than half of Pennsylvania’s 67 counties have moved to replace their voting systems to the kind that Wolf wanted: systems that include voter-verifiable paper backups that are widely embraced by election-integrity advocates and computer scientists.

Wolf’s administration has warned lawmakers that failing to replace the state's roughly 25,000 voting machines by next year’s election could leave Pennsylvania as the only state without voter-verifiable  systems and certainly the only presidential swing state in that position.

“National security and cybersecurity experts, including the Trump administration, are urging Pennsylvania and other states to have new voting systems with advanced security and a paper trail,” Wolf said in the statement.

The bill authorized Wolf’s administration to borrow up to $90 million to help counties underwrite a tab expected to exceed $100 million. It passed the Legislature last week, barely hours after Republicans unveiled the borrowing provision and combined it into a bill carrying several changes to election laws.

The measure passed without veto-proof majorities, and just seven Democrats voted for it.

One of the bill’s provisions eliminates the straight-party ticket voting option on ballots. Wolf said eliminating it could lead to voter confusion and longer lines at polls, while Democrats had argued that it is designed to benefit down-ballot Republican candidates.

The provision emerged as Republicans worry that waves of moderate suburban voters inflamed by President Donald Trump could punish down-ballot Republican candidates in the 2020 election.

Republicans acknowledge that Democratic anger in moderate suburban districts is a concern. But they insisted it did not motivate the legislation and characterized the change as a bipartisan effort to encourage voters to vote for candidates, not parties.

Wolf criticized another provision in the bill as weakening the ability of the state and counties to quickly mount a large-scale replacement of voting machines by requiring it to be studied by a commission for 180 days.

Until last week, Republicans had not promised financial support for the voting machines.

Instead, they had criticized the move as coming at considerable taxpayer expense when there are logistical hurdles and no legitimate example of an election irregularity in the state.

In separate statements Friday, Republicans made no promises about supporting money for voting machines, free of other changes to election laws that Democrats oppose. Instead, they accused Wolf of blocking money for counties and insisted that eliminating straight-party ticket voting is good policy.

“Gov. Wolf’s veto will allow the status quo to remain in order to attempt to retain an election advantage for Democrats,” Senate Republican leaders said.

Eight other states allow straight-party ticket voting, although one, Texas, is eliminating it after this year, according to the National Conference of State Legislatures. About a dozen states have eliminated it over the past quarter-century, according to the NCSL, although voters in one state, Michigan, restored it by ballot referendum last year after the Republican-controlled state government enacted a law in 2016 to eliminate it.

In testimony cited in a federal court decision last year, Michigan’s former Republican Party chairwoman, Ronna Romney McDaniel, said she had advocated for eliminating straight-party ticket voting in the state because she believed it would help Republicans win elections.

McDaniel is now chairwoman of the Republican National Committee.