Property owners near the townhouse project at Eastern Boulevard and South Royal Street have voiced concerns about squatters and overgrown weeds at recent meetings of the township board, officials said. 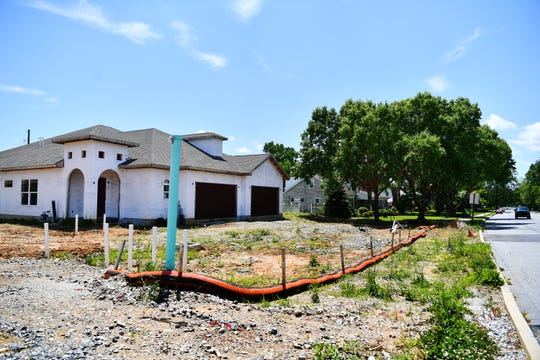 A long-stalled project in Springettsbury Township that has raised the ire of its neighbors will soon be back on track, the developer said Tuesday.

Property owners near the townhouse project at Eastern Boulevard and South Royal Street have voiced concerns about squatters and overgrown weeds at recent meetings of the township board, officials said.

"Everyone's making far more of it than it really is," he said.

The project ran into issues with financing, he said. Contractors also uncovered a "tremendous" number of rocks, and the construction permit expired.

Additionally, a telephone pole that blocked access to the stormwater management system is scheduled to be moved Friday, which will allow for construction to resume, Kagen said.

The developers will reapply for a new permit next week, Kagen said.

Earlier this month, several residents griped about the "unsecured nature of the site" and overgrown weeds, Marchant said. Others complained that squatters were sleeping at the site at night, said township board member George Dvoryak.

The township has begun cutting the weeds and charging the developers, Dvoryak said.

In response to community concerns, specifically the potential of squatters or homeless people entering the site, Kagen said he's had contractors regularly stop in to check on things — and they have noticed nothing out of the ordinary.

Kagen said the site would be locked from now on.

"Right now it's an idle project with no work happening," Marchant said. "It's a shame it hasn't gotten finished yet."