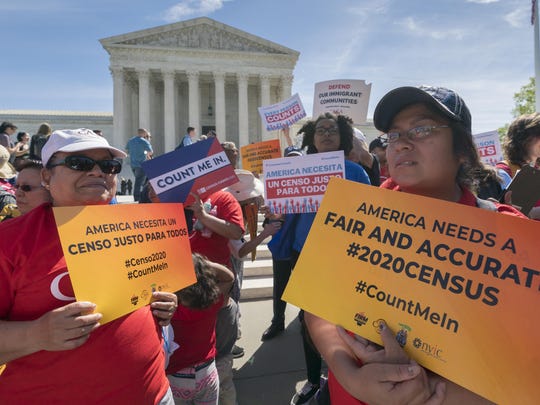 FILE - In this April 23, 2019 file photo, immigration activists rally outside the Supreme Court as the justices hear arguments over the Trump administration's plan to ask about citizenship on the 2020 census, in Washington. A new court filing Thursday, May 30 by lawyers opposing adding the citizenship question to the 2020 census alleges a longtime Republican redistricting expert played a key role in making the change. (AP Photo/J. Scott Applewhite, File) (Photo: J. Scott Applewhite / AP)

WASHINGTON – Newly revealed documents appeared to confirm Thursday what many critics had long suspected – that the Trump administration’s drive to add a citizenship question to the 2020 census began as a plan to bolster Republicans and to undercut Democrats in state legislatures and Congress.

Thomas Hofeller, a Republican expert on redistricting and gerrymandering, died last year in North Carolina. His daughter found documents on his computer hard drive urging the Commerce Department to change the census to ask all residents about whether they are citizens.

With this data, states could draw new election maps based on the number of eligible voters, not the total population. That “would be advantageous to Republicans and Non-Hispanic Whites” and “would clearly be a disadvantage for the Democrats,” he wrote.

His advice came to light Thursday because the Supreme Court is weighing whether to uphold the Trump administration’s plan to add a citizenship question to next year’s census.

Federal district judges in New York, San Francisco and Baltimore blocked the move, holding that Commerce Secretary Wilbur Ross had not put forth a legitimate explanation for such a significant change.

Census Bureau experts had predicted that millions of immigrants would refuse to answer the question, for fear of drawing attention, thereby creating a severe undercount in some areas.

Lawyers who challenged the proposed question noted that the Constitution calls for “an actual enumeration” that includes “counting the whole number of persons in each state.”

But when the Supreme Court heard oral arguments in April in the case of Department of Commerce vs. New York, the five conservative justices sounded ready to rule for the administration.

American Civil Liberties Union lawyers sent a letter to Judge Jesse Furman, who handled the New York case, saying that this “new evidence contradicts the sworn testimony” of two advisers to Ross who concealed Hofeller’s role. Since 2015, Hofeller had been urging Republicans to add a citizenship question to the next census.

The ACLU lawyers said Mark Neuman, an adviser to Ross, had consulted Hofeller and said he believed the citizenship question would “maximize” representation for the “Latino community.” They said both Neuman and Hofeller knew it “would have exactly the opposite effect. It would disadvantage Latinos and benefit ‘Non-Hispanic Whites.’”

On Thursday afternoon, the lawyers sent a letter to the Supreme Court alerting the justices to the new information.

“We always had suspicions about the real motive of the administration, but this is the clearest evidence we have that the genesis of this was an effort to dilute minority voting power,” said Dale Ho, director of the ACLU’s Voting Rights Project. “The real reason behind this was the opposite of what they were saying.”

A Justice Department official, who asked not be identified to discuss a pending case, said lawyers there “were not aware of these documents. We are looking into it.”

Ross told Congress that he chose to add the citizenship question in order to enforce the Voting Rights Act of 1965. Sometimes, when judges are called upon to redraw new voting districts, they want to know whether an area has enough African American or Latino voters to elect a minority representative.

Voting rights experts scoffed at this explanation. For decades, judges have relied on data from the American Community Survey, an ongoing survey conducted by the U.S. Census Bureau into the nation’s changing workforce, population and housing.

If the Supreme Court upholds the added citizenship question, the change would probably hurt California through a loss of federal funds and one or more of its seats in Congress. This would be the result if a large number of immigrant families were not counted in the census.

But the California state Legislature, unlike in Texas or Florida, is not likely to change how it draws electoral districts. The Supreme Court has left it to states to decide whether they want to count the total population or just eligible voters.

Hofeller was renowned as an expert on redistricting, and he now figures to play a key role in the two biggest cases pending before the high court.

He helped draw North Carolina’s gerrymandered election map, which gave Republicans a grip on 10 of 13 seats in Congress. A three-judge panel rejected the map as unconstitutional and said it was deliberately designed to entrench Republicans in power while diluting the voting strength of Democrats.

The Supreme Court agreed to hear the state’s appeal in Rucho vs. Common Cause, and the justices sounded closely split during oral arguments in late March.

Hofeller’s daughter told the North Carolina lawyers of what she found on her father’s computer, and they in turn informed those who were working on the census case.

Karen Hobert Flynn, president of Common Cause, a nonpartisan watchdog group, said the “evidence reveals that the plan to add the citizenship question was hatched by the Republicans’ chief redistricting mastermind to create an electoral advantage for Republicans and non-Hispanic whites.”

The dispute that came to light Thursday began about five years ago. Census data will be used to redraw election districts all across the country in 2021, and some conservative activists argued that these districts should be drawn based on the number of eligible voters, not the total population.

But when the Supreme Court debated this idea in a Texas case three years ago, several justices objected, noting the government did not have precise block-by-block data on voters because the census counts all residents, regardless of whether they are citizens who are eligible to vote.

That case, Evenwel vs. Texas, could have had a significant impact in California if the justices had ruled for the conservative challengers. They said the court should enforce the one-person, one-person rule by requiring that election districts have an equal number of voters.

In California, Texas and elsewhere, many of the state, local and congressional districts have large numbers of immigrants, and these districts tend to favor Democrats.

Redrawing the electoral map based on the number of adult citizens would shrink the number of Democratic districts and tilt the balance in favor of Republicans, Hofeller said.

But Justice Antonin Scalia died while the Texas case was pending, and the justices handed down a limited ruling. They all agreed states may continue to draw districts based on the total population, not the count of eligible voters.

However, they left open the possibility that some states could choose that other option in the future.

Citing that experience, Hofeller urged Republicans to plan ahead and to collect citizenship data in the next census.