U.S. and Chinese negotiators planned to continue talks Friday in an effort to resolve the standoff after the United States raised tariffs on Chinese imports, escalating tensions between the world’s two biggest 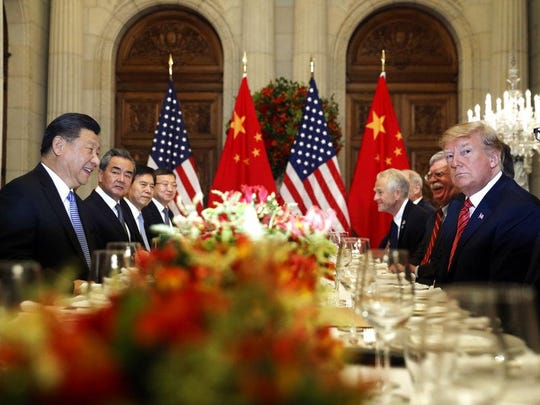 WASHINGTON – President Donald Trump said Friday that trade talks between China and the U.S. were continuing in a “very congenial manner” despite new tariffs the U.S. imposed Friday on $200 billion in Chinese imports and Beijing’s vow to retaliate.

In a series of blustering morning tweets, Trump also claimed the new tariffs will help rather than hurt the U.S. and bring “FAR MORE wealth.” He offered a proposal he said would ease any negative impact on U.S. farmers from lost sales to China.

U.S. and Chinese negotiators planned to continue talks Friday in an effort to resolve the standoff after the United States raised tariffs on Chinese imports, escalating tensions between the world’s two biggest economies and rattling stock markets around the world.

“Tariffs will make our Country MUCH STRONGER, not weaker. Just sit back and watch!” Trump tweeted.

The U.S. stock market, which until this week had been expecting the two sides to reach an accord on trade, has been dropping for several days and reacted negatively again to Trump’s tweet that “there is absolutely no need to rush” to make a deal. Investors worry about the impact of a full-blown trade war because it would raise costs for companies importing Chinese goods, could make doing business in China more difficult and would generally threaten to slow the global economy.

The S&P 500 index is on track for its worst week of 2019, although it’s still showing a double-digit gain for the year.

The talks in Washington were thrown into disarray this week after top U.S. trade negotiator Robert Lighthizer and Treasury Secretary Steven Mnuchin accused the Chinese of reneging on commitments they’d made earlier.

“China should not renegotiate deals with the U.S. at the last minute,” Trump tweeted. “There is no need to rush through negotiations because ‘massive payments’ the Chinese are now paying “go directly into the Treasury of the U.S.”

FILE - In this Sept. 21, 2018, file photo, Mike Starkey offloads soybeans from his combine as he harvests his crops in Brownsburg, Ind. For months, the U.S. economy has shrugged off the tariffs slapped by America and China on tens of billions of dollars of each otherâs goods. In drawing up its list of targets, Beijing focused specifically on soybeans and other farm products in a direct shot at Trump supporters in the U.S. (AP Photo/Michael Conroy, File) (Photo: Michael Conroy / AP)

Money is indeed going into the federal treasury, but it’s mostly, if not entirely, coming from the tariffs – taxes – on U.S. businesses and consumers, not China, and it’s not a driver of economic growth but rather a risk to it.

Some lawmakers have recently expressed concern about the effect of the tariffs on farmers, which Trump referenced in his tweets.

He suggested that money from the additional tariffs would allow the U.S. to buy more agricultural goods from American farmers and ship the produce to “poor & starving” countries.

Trump tweeted that if the U.S. bought $15 billion in agriculture from farmers it would be far more than China buys now. He also said the U.S. would have more than $85 billion left over for new American infrastructure, health care or other programs.

It was unclear what numbers Trump was using to make his point. According to the United States Department of Agriculture, China bought $9.2 billion in U.S. agricultural exports in 2018.

“Our Farmers will do better, faster, and starving nations can now be helped,” Trump tweeted. He provided no detail about what he meant. “Waivers on some products will be granted, or go to a new source!”

A Chinese Foreign Ministry spokesman said Beijing is hoping the Trump administration will meet China “halfway” in the dispute over trade. The spokesman, Geng Shuang, spoke just hours after the U.S. raised tariffs Friday on $200 billion in imports from China to 25% from 10%.