The Confronting Racism Coalition was born last May after racially motivated incidents in York County spurred about 150 individuals interested in lasting change to gather for an initial meeting.

"In 2017, York was profiled on the front page of the Boston Globe with a two-part series about racism," said YWCA York president and CEO Jean Treuthart. Among recent incidents were anti-Semitic flyers on cars, threats spray-painted on a family's garage and white students shouting "white power" at black peers, she said.

Among the group's goals is increasing diversity in police departments by initiating a campaign or outreach program to bring in more minority applicants, said coalition member, artist and community activist Ophelia Chambliss.

She said the coalition has already spoken with York City Police Chief Troy Bankert and plans to reach out to more local departments. 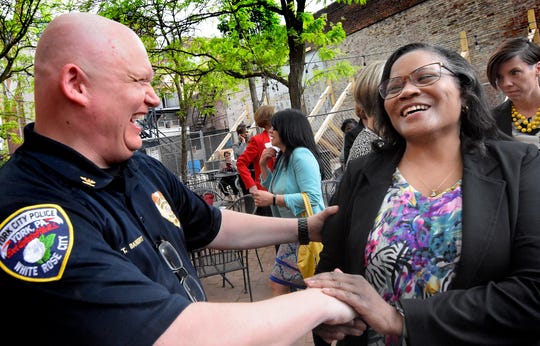 "First we have to assess to find out what are the numbers before we can start saying, well we'd like to see those numbers increase by 20% or 15%," she said. Next, they will figure out what the deterrents are and how best to make potential applicants aware.

Other goals include assessing school demographics to help determine needs, increasing the number of local minority businesses and organizing a community response network, according to a news release. 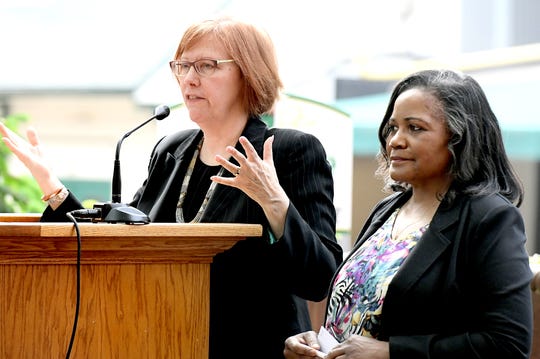 Chambliss said there's a disparity in how bad residents perceive racism in the county to be and how bad it actually is, so raising awareness is a strong focus of the coalition.

"Typically when someone is not affected by it, they're not aware of it," she said.

Since then, about 60 members of the coalition have met consistently each month, and members hope it will grow. 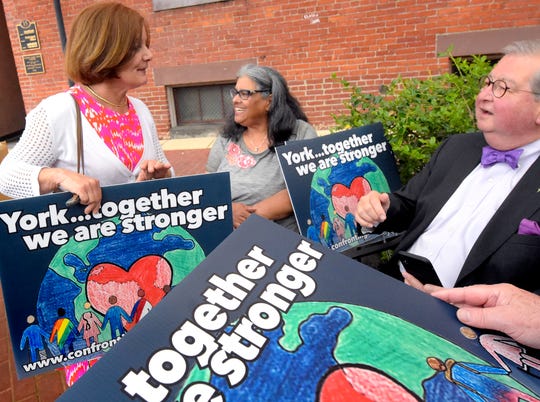 York County Commissioner Susan Byrnes, left, and York City Councilman Henry Nixon talk with Confronting Racism Coalition member Maggie Manning after a CRC press conference outside the Jewish Community Center's IDEAS Center in Cherry Lane Park Wednesday, May 8, 2019. During the event, members of the CRC shared its vision for creating equality in the York Community. Yard signs in support of the coalition were circulated after the event. Bill Kalina photo (Photo: Bill Kalina, The York Dispatch)

"We’re really excited that there is this volunteer-led community group," Treuthart said. "I think everyone is aware that we have some work to do in our community."

The York County Community Foundation stepped in to provide initial administrative support to the group — and help jump-start efforts financially — before a partnership with YWCA York and the York Jewish Community Center was formed.

Together, those groups work together at the IDEAS Center, which stands for Inclusion, Diversity, Equity and Social Change, in York City's Cherry Lane.

Treuthart said the YWCA has seen a significant increase in its educational training seminars over the last year, including local organizations and school districts, thanks in part to working together with the JCC, which held similar events.

She said she's been able to work with students, principals and school board members multiple times within the last year in about six school districts that came forward with the intention of digging deep and working toward racial justice.

York City school board member Lisa Kennedy said she's been a part of the coalition from the beginning.

"It's not a sprint, it's a marathon," she said. "It's about building relationships and building trust. ... We're really focused on learning about each other and our experiences."

The next coalition meeting is 5:30-7 p.m. Thursday, May 30, at the York JCC, 2000 Hollywood Drive, and the group hopes to hire a consultant for structural organization within the next week or so, Chambliss said.