Juul nicotine hit may be ‘Worst for kids, best for smokers’

She tried gums, patches and various electronic cigarettes to quit smoking. What finally worked for Chantel Williams was a small, reusable e-cigarette called Juul that packs a big nicotine punch.

Juul nicotine hit may be ‘Worst for kids, best for smokers’ 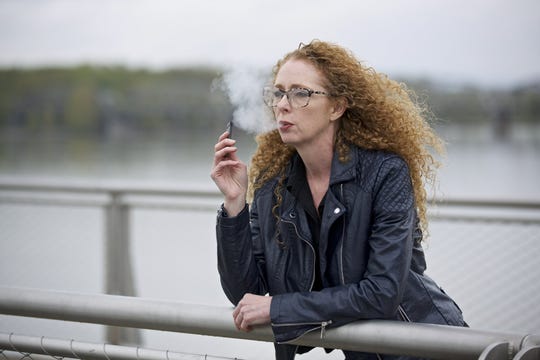 Chantel Williams vapes from a Juul pen in Vancouver, Wash., Tuesday, April 16, 2019. She tried gums, patches and various electronic cigarettes to quit smoking. What finally worked for Williams was the small, reusable e-cigarette that has a strong nicotine punch. (Photo: Craig Mitchelldyer)

“I look better. I feel better and I don’t smell. It’s fantastic,” said Williams of Portland, Oregon, who smoked for decades.

That nicotine hit and its easy-to-inhale vapor is one reason why Juul is so popular – and so feared.

“That’s the trouble with Juul: It’s probably the worst for kids but it might be the best for adult smokers,” said Dr. Nancy Rigotti, a tobacco treatment specialist at Harvard Medical School.

The brainchild of two Stanford University design students, Juul launched in 2015 and quickly leapfrogged over its competitors to become the top-selling e-cigarette in the U.S. Today, the privately held company controls nearly three-quarters of the $3.7 billion-dollar retail market for e-cigarettes, spawning dozens of copycat brands along the way.

With Juul’s rise came an explosion of underage vaping, alarming public health officials and lawmakers. Last year, 1 in 5 U.S. high school students reported vaping in the previous month, according to a government survey.

Juul and other pod-based vaping devices can be used discreetly, without the smoke, odor or throat irritation that deterred some teenagers from smoking. E-cigarettes typically heat a solution containing nicotine into a vapor, and health experts say the addictive chemical is harmful to developing brains. Recent research published shows some teenagers aren’t even aware they are inhaling nicotine when using Juul and similar e-cigarettes.

Proposals to keep e-cigarettes away from teenagers include banning flavored solutions, restricting where they can be sold and raising the purchase age to 21, which some states have done.

Less attention has been paid to Juul’s quick, powerful buzz.

Abbey Solomon first began seeing Juul around the house when her son Jack was in 8th grade.

Like many parents, she didn’t initially recognize the small, rechargeable device, which resembles a flash drive, as an e-cigarette. But as parents and teachers began sounding the alarm, she started confiscating Juul and its color-coded flavor pods from her son and his friends.

Last year, Jack, 16, became an unlikely spokesman for the anti-vaping movement, appearing in a viral video , “Juulers against Juul” to push for tougher restrictions to protect kids.

In the video, he says teenagers will often leave school to get their Juul fix. “It shouldn’t happen,” he said. “But kids are very addicted to these e-cigarettes and need this stuff to be satisfied.”

Jack himself hasn’t been able to quit, his mother says. When she tried to make him stop, “he was moody, he was complaining, he wasn’t sleeping,” says Solomon, of Scarsdale, New York. “He was miserable because he was going through nicotine withdrawal. He was addicted.”

The U.S. Food and Drug Administration has the power to cap nicotine levels in e-cigarettes, but hasn’t proposed any such standard. For cigarettes, there’s no limit on nicotine, although the FDA has taken preliminary steps toward reducing levels to help smokers quit. Limiting nicotine in e-cigarettes could have unintended consequences, including making the products less satisfying for smokers trying to switch.

Juul declined interviews for this story, but said in a statement that its product is formulated to “mimic the experience of a cigarette.” Its goal is to offer smokers an alternative to tobacco-burning cigarettes, the company said. Under pressure from regulators, Juul voluntarily shut down its Facebook and Instagram accounts and pulled several flavors out of stores last November.

Company critics say Juul’s nicotine level may be excessive and should be getting far more scrutiny.

“I think there’s a real question of how addictive these products need to be,” said Robin Koval, CEO of the Truth Initiative, a nonprofit anti-smoking education group.

Juul sells two formulas for most of its flavor pods. One contains 59 milligrams of nicotine per milliliter of liquid, or roughly three times what can be sold to consumers in Europe, where Juul sells a 20-milligram version of its pods. Juul’s lower-nicotine U.S. version contains 35 milligrams of nicotine per milliliter, which still exceeds the European limit.

Britain and other nations have had success promoting e-cigarettes as a lower-risk alternative to smokers, without seeing a surge in underage vaping. But they also have tighter regulations, including strict limits on advertising.

Juul, like all e-cigarettes in the U.S., has not been approved to help smokers quit. The FDA isn’t expected to begin reviewing the contents and health effects of e-cigarettes for at least two more years.

While calling underage vaping a “mounting epidemic of youth addiction,” recently departed FDA Commissioner Scott Gottlieb stressed the importance of keeping e-cigarettes available for adult smokers trying to quit. The FDA and most experts agree that e-cigarettes are probably less harmful than traditional cigarettes because they don’t produce all of the cancer-causing byproducts of burning tobacco.

Meanwhile, the vaping industry appears to be following Juul’s lead.

Juul has published little peer-reviewed research, and only in the last year have independent researchers begun studying its formula. The company says each of its full-strength pods delivers about as much nicotine as a pack of cigarettes. But experts note that usage varies widely; some people may vape one pod a day, others one pod a week.

Most researchers have focused on a more objective measure: the potency of Juul’s nicotine formula, or e-liquid.

Researchers at Portland State University analyzed the concentration of Juul’s full-strength pod against nine other nicotine formulas on the market in 2017. Juul’s nicotine level dwarfed its competitors, in some cases by twentyfold.

Regular cigarettes and older e-cigarettes mainly contain nicotine in its freebase form, which becomes increasingly harsh on the throat at higher levels. Juul’s innovation was to convert the nicotine to its salt form by combining it with an acid. The result is a mild vapor that allows even a novice to inhale large doses of nicotine.

David Peyton, a chemistry professor at Portland State who co-authored the paper, says Juul’s popularity is due to a combination of its formulation, flavors and marketing efforts.

Adult smokers want something that “will deliver this hit and relieve their nicotine craving as fast as possible,” said Dr. Maciej Goniewicz, a toxicologist at Roswell Park Comprehensive Cancer Center in Buffalo, New York.

That’s what attracted Chantel Williams to Juul. The 46-year-old social media manager said she began smoking in grade school. She tried to quit beginning in 2005, using nicotine gum, patches and eventually e-cigarettes. Refillable vaping devices were “too much work,” she said. And other brands didn’t have the immediacy of a cigarette like Juul.

“You just grab it and you’re taken care of it,” she said.

The Associated Press Health and Science Department receives support from the Howard Hughes Medical Institute’s Department of Science Education. The AP is solely responsible for all content.