The York County Planning Commission will present a proposal for a stormwater authority, along with several alternative options, to the county commissioners in early May. 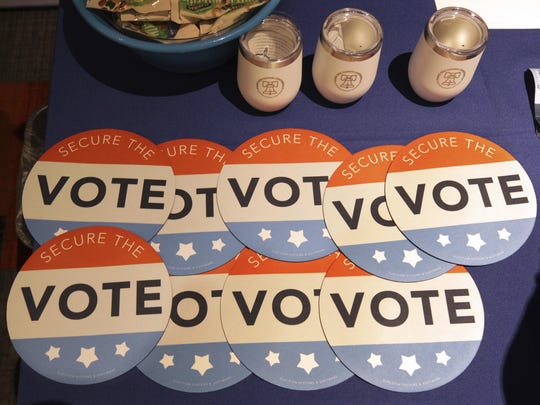 FILE - In this July 14, 2018, file photo, computer mouse pads with Secure the Vote logo on them are seen on a vendor's table at a convention of state secretaries of state in Philadelphia. As alarms blare about Russian interference in U.S. elections, the Trump administration is facing criticism that it has no clear national strategy to protect the country during the upcoming midterms and beyond. Both Republicans and Democrats have criticized the administrationâs response as fragmented, without enough coordination across federal agencies. (AP Photo/Mel Evans, File) (Photo: Mel Evans / AP)

The York County Board of Commissioners will soon decide whether to move forward with a countywide stormwater authority to address nitrogen deposits in county waterways, and the candidates running for the board — including two incumbents — are weighing in.

"As of now, I’m leaning against it because I would rather move forward with the water quality monitoring and find out what the problems are," said Vice President Commissioner Doug Hoke. "But before we get the final report, I want to make sure I leave all my options open."

The county is considering installing nine water quality monitoring stations, one in each of the county's sub-watersheds, to collect real-time data and determine the severity of the stormwater problem.

Hoke, a Democrat, is running for reelection. He's currently in his third term.

All three commissioner seats are up for grabs in November, but the nine candidates in the race must first clear the May 21 primary.

The York County Planning Commission will present a proposal for a stormwater authority, along with several alternative options, to the county commissioners in early May.

The report is the result of a feasibility study and extensive public input.

Commissioner Chris Reilly, also seeking reelection, said he's not in favor of establishing an authority at this point and that he's also leaning toward first investing in water quality monitoring stations to establish baseline data about how the county is really doing.

Reilly, a Republican, is seeking his sixth term on the board.

"The stormwater authority issue is probably the most contentious issue I have experienced as a county commissioner, which is saying something," he said.

After hearing from taxpayers, the agricultural community and other stakeholder groups, Reilly said York County citizens were "loud and clear" in saying they didn't want an authority.

The commissioners haven't scheduled a vote yet, as they haven't had a chance to review the planning commission's report.

Hoke said he thinks the sooner the county moves forward on the issue and lets the public know what to expect, the better.

Reilly said there's a decent chance the board of commissioners will make a decision before the May 21 primary.

Republican challengers: Ron Smith, a Dallastown Borough Council member and Republican candidate for commissioner, said that at this point he's not convinced an authority is the best way to move forward — or that it's necessary.

He said the water quality monitoring stations would be a good place to start.

"We need to get some concrete data that shows where these issues really are, what the issues really are and who’s creating the problem," Smith said. "Once we get that data over time, then we can analyze how to best move forward."

Blanda Nace, another Republican challenger, said he's in favor of establishing the authority but opposes the proposed fee structure.

"The information that we have is not current and the requirements that we need to meet aren’t necessarily clear," he said.

"Establishing where we are now is critical to determining where we need to be, so I am certainly in favor of the monitoring," he said.

In a written statement provided by her campaign, Republican Julie Wheeler said she supports investing in water quality monitoring systems to establish baseline measurements for nitrogen deposits, as well as partnering with the conservation district to achieve the county's goals.

"Once we have a baseline, we can then work on pro-active solutions to address," she stated. "We need to work collaboratively with our farming community on solutions that make sense for all parties."

Republican Steve Chronister, a former county commissioner seeking a fourth term on the board, said that although he wouldn't necessarily jump to an authority as the first solution, he recognizes that stormwater is a countywide responsibility.

"I just think it could be a lot more costly if everybody does their own little thing," he said.

Chronister said he's open to the potential option of working within the conservation district or establishing a new county department, but ultimately, the planning commission's recommendation would carry the most weight with him.

"I do have a tremendous amount of faith in Felicia Dell and her guidance from the planning commission," he said. "I think they do a good job, and obviously, they would play a pretty big role."

Dell is the director of the planning commission.

More: Chronister could face off against one of 'Grandview Five'

"I think setting up the nine sites to check water quality is a really good first step because we need to figure out what our baseline is," she said.

Higgins specifically mentioned the farmers who spoke at public meetings, many of whom said they already have water conservation and water abatement and runoff plans in place, and she said it's important to look into the other potential sources of pollutants, such as the treatments used on icy roads in the winter.

"I don’t think creating an entire authority when we don’t know that there’s even a problem that warrants it is a wise use of money," Higgins said. "If there’s proof that comes out, that’s an entirely different conversation, but we need to know what’s going on first."

Democratic candidate Karen Crosby said she would support the creation of an authority as long as it would be funded through fees and not increased property taxes.

Crosby said she's interested in learning more about other potential options that could be less expensive than an authority.

Democratic candidate Madeline Geiman said the best move forward for the county would be to establish the stormwater authority and that she's glad the county is being proactive to address the issue.

"The costs to keep our water supply clean are going to be too hard for individuals and for the municipalities to manage," she said.

Geiman said she also supports the plan to add more staff at the conservation district.

The stormwater authority plan isn't perfect, but it would be more expensive to do nothing than to invest a bit of money to create something better, she added.

Background: Pennsylvania is one of six states, along with the District of Columbia, participating in the Chesapeake Bay Watershed Agreement, a cooperative plan signed in 2014 with the stated goal of restoring the health of the bay.