Avenatti charged with fraud as he testified in related case

Avenatti charged with fraud as he testified in related case 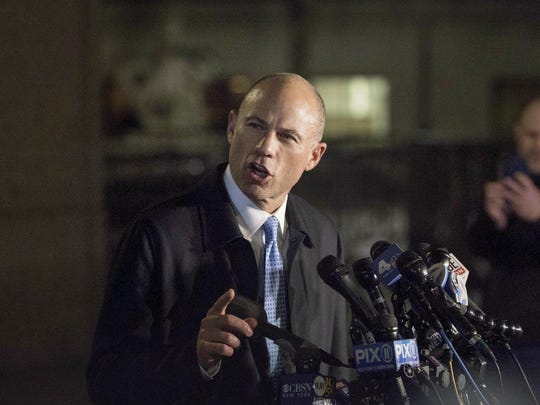 Attorney Michael Avenatti delivers remarks in front of federal court after his initial appearance in an extortion case Monday, March 25, 2019, in New York. Avenatti was arrested Monday on charges that included trying to shake down Nike for as much as $25 million by threatening the company with bad publicity. (AP Photo/Kevin Hagen) (Photo: Kevin Hagen / AP)

Avenatti was testifying Friday in his own defense in a civil case that included allegations he pocketed $1.6 million from a client as the feds were including that claim in their criminal case that could put him behind bars for decades.

Avenatti, 48, faces charges in California for allegedly filing bogus tax returns to secure $4 million in loans and embezzling the client’s settlement funds. He faces charges in New York of threatening to release damaging information against Nike if it didn’t pay him and another lawyer up to $25 million.

About 12 hours after being released from custody, Avenatti returned to his combative form Tuesday and went on the offensive, accusing Nike of “rampant” corruption.

He claimed on Twitter that Nike funneled “large sums” of money to elite student-athletes bound for top colleges and said the corruption reached the highest levels at the company.

Prosecutors haven’t commented on whether Avenatti’s information about Nike was accurate but said he crossed a line by trying to enrich himself with threats.

A Nike spokesman declined to answer questions about Avenatti’s tweets. The company released a statement Monday saying it will “not be extorted or hide information that is relevant to a government investigation.”

While he confidently declared after his release from custody that he would be exonerated, Avenatti told CBS on Tuesday that he is concerned about the charges.

The arrest of Avenatti, who seized the spotlight as a Trump antagonist and considered his own run for president, came as a surprise to many, but not to some of those who have worked with him.

Jason Frank, who was an independent contractor for the now-bankrupt firm of Eagan Avenatti, has been seeking compensation he claims he’s owed for work done before he resigned in 2016, according to federal court filings.

Frank is still trying to collect a $10 million judgment his firm won against Eagan Avenatti and a $4 million personal judgment against Avenatti.

“The conduct described in the criminal complaint is the conduct we’ve seen Mr. Avenatti engage in with respect to his debts to his partners going back years,” attorney Andrew Stolper said. “What you see is a lawyer using his kind of inside knowledge of the legal system.”

Most of a nearly $1.4 million payment sent to Eagan Avenatti as part of a settlement with the NFL was funneled to an account for personal expenses such as rent on a luxury apartment and monthly payments on a Ferrari, Frank’s lawyers said.

On Friday, Stolper questioned Avenatti under oath at a debtor exam about a $4 million payment his firm received from Los Angeles County on behalf of a paraplegic man who tried to kill himself in jail.

Avenatti testified that he paid the firm’s client, Geoffrey Johnson, all the money he was owed, but checks show Johnson received monthly payments totaling no more than a couple of hundred thousand dollars over the past three years, Stolper said.

In an email to The Associated Press, Avenatti said Johnson approved all transactions and accounting and has been kept in the loop.

“He has repeatedly thanked me for my dedication to his case and the ethics I have employed,” Avenatti wrote.

Avenatti was also questioned in court about the case of Gregory Barela, who he negotiated a $1.9 million settlement for in an intellectual property dispute against a Colorado company, according to court records.

Barela hired new lawyers to chase the money down after he said Avenatti wouldn’t pay him. They went to the FBI after finding records that $1.6 million was paid to Avenatti.

“Avenatti testified he paid Mr. Barela everything he was owed without ever identifying any payment,” Bledsoe said. “Documents show he didn’t pay anything. It was just B.S.”

While he was still on the witness stand in Los Angeles, prosecutors filed a wire fraud charge in U.S. District Court in Santa Ana accusing Avenatti of embezzling from Barela.

Prosecutors said Avenatti deceived Barela about the date he received the payment and never turned it over to him. At one point, he provided a $130,000 “advance” on the payment he already received and later offered to loan Barela $100,000 if he paid interest.

“It appears Mr. Avenatti loaned the client’s own money to the client,” U.S. Attorney Nick Hanna said in announcing the charges. “Money that Mr. Avenatti had already secretly collected.”

Attorney Ken White, a former federal prosecutor, said the relatively short criminal complaints without disclosing too much evidence indicates prosecutors are confident they have a strong case. Indictments are likely to offer more information and, possibly, additional charges that could include evidence uprooted by Frank.

“It will be interesting to see when the indictment finally comes down to what extent it’s going to mirror more of what his former partner’s been saying,” White said.