Manafort returning to federal court for another sentencing

Former Trump campaign chairman Paul Manafort faces his second sentencing hearing in as many weeks, with a judge expected to tack on additional prison time beyond the roughly four-year punishment he has already

Manafort returning to federal court for another sentencing

Politico reports that Paul Manafort will be sentenced today for his role in the Mueller investigation. This brings an end to Robert Mueller’s most public legal battle. York Dispatch

WASHINGTON – Former Trump campaign chairman Paul Manafort faces his second sentencing hearing in as many weeks, with a judge expected to tack on additional prison time beyond the roughly four-year punishment he has already received.

Manafort, 69, faces up to 10 additional years in prison when he is sentenced Wednesday in Washington in special counsel Robert Mueller’s investigation into ties between the Trump campaign and Russia.

A judge in Virginia last week sentenced Manafort to 47 months in prison, far below sentencing guidelines that allowed for more than two decades in prison, prompting national debate about disparities in how rich and poor defendants are treated by the criminal justice system.

As U.S. District Judge Amy Berman Jackson in Washington decides whether the sentences should run consecutively or at the same time, she is likely to take into account allegations by prosecutors that Manafort tampered with witnesses after he was charged and that he lied to investigators even after he pleaded guilty and pledged to cooperate.

The hearing may offer a window into tantalizing allegations that aren’t part of the criminal cases against him but have nonetheless surfaced in recent court filings – that Manafort shared Trump campaign polling data with Konstantin Kilimnik, a business associate the U.S. says has ties to Russian intelligence, and that the two men met secretly during the campaign in an encounter that prosecutors say cuts “to the heart” of their investigation. 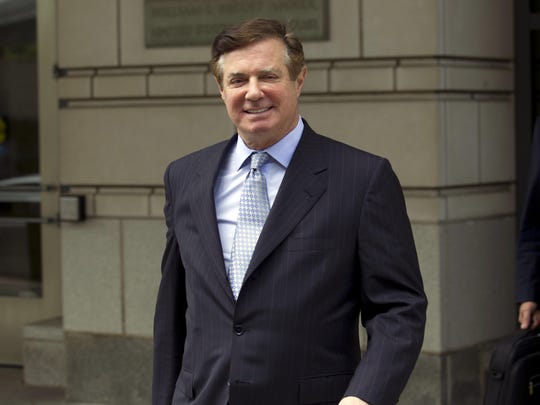 FILE - In this May 23, 2018, file photo, Paul Manafort, President Donald Trump's former campaign chairman, leaves the Federal District Court after a hearing in Washington. Manafort faces his second sentencing hearing in his many weeks, with a judge expected to tack on additional prison time beyond the roughly four-year punishment he has already received. (AP Photo/Jose Luis Magana, File) (Photo: Jose Luis Magana / AP)

The sentencing hearings for Manafort mark a bookend of sorts for Mueller’s investigation as it inches toward a conclusion. Manafort and business associate Rick Gates were among the first of 34 people charged, and though the charges against Manafort weren’t tied to his work on the Trump campaign, his foreign entanglements have made him a subject of intrigue to prosecutors assessing whether the campaign colluded with Russia to sway the outcome of the election.

Wednesday’s sentencing comes in a week of activity for the investigation. Mueller’s prosecutors on Tuesday night updated a judge on the status of cooperation provided by one defendant, former national security adviser Michael Flynn, and are expected to do the same later in the week for Gates.

The Mueller team has prosecuted Manafort in both Washington and Virginia related to his foreign consulting work on behalf of a pro-Russia Ukrainian political party. Manafort was convicted of bank and tax fraud in the Virginia case and pleaded guilty in Washington to two conspiracy counts, each punishable by up to five years in prison.

The decision by U.S. District Judge T.S. Ellis III to sentence Manafort to 47 months stunned many who’d been following the case given both the guideline calculation of 19.5 to 24 years in prison and the fact that the defendant was convicted of hiding millions of dollars from the IRS in undisclosed foreign bank accounts. But Ellis made clear during the sentencing hearing that he found the government’s sentencing guidelines unduly harsh and declared his own sentence “sufficiently punitive.”

“If anybody in this courtroom doesn’t think so, go and spend a day in the jail or penitentiary of the federal government,” Ellis said. “Spend a week there.”

Manafort has been jailed since last June, when Berman Jackson revoked his house arrest over allegations that he and Kilimnik sought to influence witnesses by trying to get them to testify in a certain way.