Those close to the former vice president believe he would start off at a fundraising disadvantage compared to would-be rivals, whose campaigns have benefited from an early flood of small-dollar donations from t 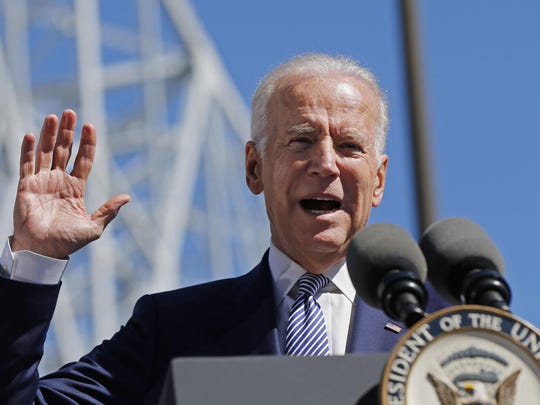 NEW YORK – On the cusp of another White House run, Joe Biden faces a daunting challenge that could complicate his path to the 2020 Democratic presidential nomination: money.

Those close to the former vice president believe he would start off at a fundraising disadvantage compared to would-be rivals, whose campaigns have benefited from an early flood of small-dollar donations from the most liberal wing of the party. Biden, a 76-year-old lifetime politician with strong connections to the party’s establishment, would be forced to rely on an “old-school grind-it-out” plan to generate campaign cash from wealthy individual donors, according to a person with direct knowledge of Biden’s thinking.

Questions about money are among the nagging issues Biden is still considering as he weighs launching a campaign. He’s decamped this week to St. Croix, a favorite Biden family vacation spot in the Caribbean, to discuss the remaining roadblocks with his wife, Jill.

Biden has long disliked the time-intensive process of political fundraising. But with virtually no campaign operation in key states, he’d need to generate millions of dollars in a matter of weeks should he enter what is expected to be the most expensive presidential campaign in U.S. history.

“He obviously has a lot of friends among the Democratic donor community,” said David Axelrod, one of former President Barack Obama’s top political advisers. “But fundraising today is turbo-charged by social media. He’s not of the social media generation.”

The fundraising question comes as Biden allies across the country feel an increasing sense of urgency for the Democratic heavyweight to declare his intentions. He has repeatedly hinted that he’s close to making a decision, but those close to him now believe that an announcement, which some expected in January, might be delayed until April.

Democrats in key primary states are warning that it’s becoming more difficult to persuade Biden holdouts to be patient as a crowded field of presidential contenders such as Massachusetts Sen. Elizabeth Warren, California Sen. Kamala Harris and Vermont Sen. Bernie Sanders actively fight for their support.

In South Carolina, which holds the first primary contest in the South, Charleston County Democratic Party Chairman Brady Quirk-Garvan said Biden’s indecision has created a holding pattern for potential staffers and supporters. As time drags on, he said, he’s fielding calls from some who are confused by Biden’s indecision.

“Several have said it’s concerning that he can’t seem to make up his mind,” Quirk-Garvan said. “If you’re going to run for president, most people want someone who’s pretty damn sure they want to be president.”

Biden has made clear to his family, friends and advisers that he wants to run, but he has held off giving his team the final go-ahead to launch a campaign. Among the factors giving him pause is concern about the impact a presidential run would have on his family, particularly given his son Hunter’s complicated personal history.

Even so, Biden adviser Steve Ricchetti has been signaling to potential Democratic rivals that Biden is expected to run. Other advisers including Greg Schultz and Peter Kavanaugh have been in regular contact with potential staff across the country to ensure Biden could quickly ramp up a national organization.

Those close to Biden expect him to signal his decision – at least internally – in the coming days to be followed by an intense period of hiring ahead of an April announcement should he decide to run.

Biden’s likely entry into the race was among the factors that led former New York City Mayor Michael Bloomberg to decide this week that he would not launch a campaign. Biden and Bloomberg spoke after the former mayor announced his decision, according to a person with knowledge of the conversation.

That person, like others in the story, spoke to The Associated Press on condition of anonymity because they were not authorized to publicly discuss private conversations.

Biden has openly raised questions about the social media and fundraising landscape, which has changed dramatically since he first joined Obama on the Democrats’ 2008 presidential ticket.

Several 2020 Democratic contenders have condemned super PACs in recent weeks. Warren, who has been struggling to raise money, took it a step further late last month, vowing not to court wealthy donors at all.

Biden acknowledged during a recent appearance at the University of Delaware that fundraising is a major consideration.

“We also are making a decision on whether or not we can fund this campaign on my conditions because I will not be part of a super PAC – and to see whether or not it’s realistic,” Biden said. “An awful lot of people have offered to help – the people, who are usually the biggest donors in the Democratic Party, and, I might add, some major Republican folks.”

A frequent headliner on the Democratic money circuit, Biden is well-known among donors but does not have a pool of big-dollar fundraisers lined up ready to commit to his campaign.

And his fundraising track record is underwhelming at best.

He faced little more than token opposition in his long run as a Delaware senator, requiring a relatively light fundraising burden. And in his 2008 presidential run, Biden raised barely half of the $20 million fundraising goal he set before dropping out of the race following a weak finish in the Iowa caucuses.

He was outraised by four other Democratic candidates in the final three months of his campaign, according to the Center for Responsive Politics.

With no clear front-runner in the crowded 2020 Democratic field, many of Obama’s donors are holding off on making commitments to one candidate or plan to give smaller amounts to multiple candidates in the coming months. Biden’s entry into the race is unlikely to change that approach, according to a Democrat who has spoken to several Obama donors.

“I think he’d raise more money than several of the top candidates combined,” Peebles said, vowing to support Biden if he runs. “He’s the best chance that the Democrats have to win in November.”

Some Biden loyalists are not as patient.

In Iowa, Roxana Moritz, who was part of Biden’s Iowa steering committee during his failed 2008 bid, expressed concern that by waiting so long, Biden was allowing other candidates to peel off some of his supporters.

“The longer it goes, the harder it gets” for the former vice president to consolidate support, said Mortiz, the Scott County auditor.

While she’s still certain to support Biden if he runs, Moritz is getting anxious.

“I wish that he would be clear on his plans,” she said.