A moose walks into a hospital ...

The animal snacked on some lobby plants before hoofing it back outside.

A moose walks into a hospital ... 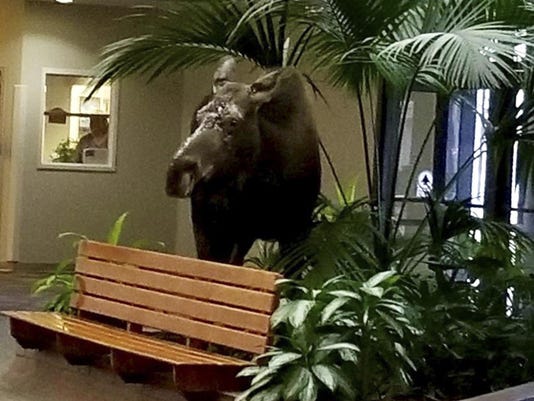 This Jan. 7, 2019, photo provided by Anchorage Regional Hospital shows a moose that had wandered into its therapy facility in Anchorage, Alaska, through doors that were stuck open because of extreme cold temperatures. The moose chomped on some plants in the lobby and stuck around for about 10 minutes before leaving the building. (Alaska Regional Hospital via AP)(Photo: AP)

ANCHORAGE, Alaska — A moose wandered into a hospital building in Alaska’s largest city and chowed down on plants in the lobby as workers watched the massive animal in awe.

When a patient mentioned that security staffers were monitoring a moose that had gotten inside the Anchorage building Monday, Stephanie Hupton dashed out and started recording.

“Didn’t think we’d have a pet moose,” said Hupton, who works in billing at a physical therapy office inside a building attached to Alaska Regional Hospital.

The footage shows the moose browsing around greenery near an entrance before it stands gazing in the camera’s direction. It briefly lingers before sauntering out through an open door.

Unexpected: Hupton said she never felt threatened by the mellow creature. It was an experience she never expected when she moved to Anchorage three years ago from Carroll, Iowa.

The moose got inside through doors that were stuck open because of extreme cold in Anchorage, where temperatures hovered around zero Monday, hospital spokeswoman Kjerstin Lastufka said.

The plants in the warm lobby were likely inviting to the animal, who ate some of them before leaving after about 10 minutes, Lastufka said.

The moose caused no injuries or any big problems, other than the snacking.

“It was a pretty calm visit,” Lastufka said.