Springettsbury Township Police are investigating the death of a resident at Pleasant Acres Rehabilitation and Nursing Center after the coroner's office determined her death was a homicide. 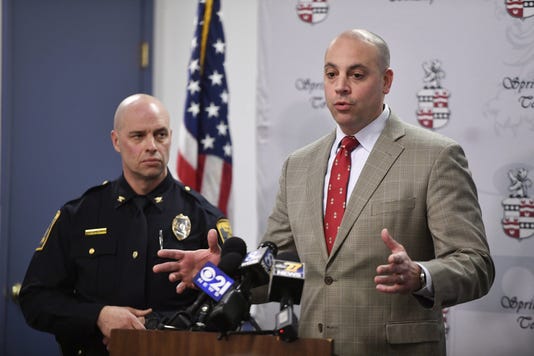 District Attorney Dave Sunday speaks about the investigation into the death of 89-year-old Nancy Young. Young died after an altercation at the Pleasant Acres, according to the coroner's office. John A. Pavoncello photo.(Photo: The York Dispatch)Buy Photo

Springettsbury Township Police are investigating the death of a resident at Pleasant Acres Rehabilitation and Nursing Center after the coroner's office determined her death was a homicide.

The York County Coroner's Office said in a news release that the death of 89-year-old Nancy Young stemmed from an altercation with another resident at the Springettsbury Township facility on Dec. 8.

Young died from complications of a left hip fracture caused by a fall during the altercation a week later, on Saturday, Dec. 15, according to the coroner's office. It was initially believed that the fall was accidental, according to the release.

During a news conference Wednesday, Dec. 19, Springettsbury Township Police Chief Dan Stump said the initial investigation showed that Young either was pushed or had a door shut on her.

“Up to this point, none of those speculations have been corroborated,” he said.

The chief said once the death was deemed a homicide — death at the hands of another — there was a lot of concern from residents.

"I want to be clear that no one at Pleasant Acres Nursing Home is in danger," he said. "This was an isolated incident."

Coroner Pam Gay noted in her news release that because Young's death was the result of an altercation, the death was ruled a homicide. It does not mean that that determination has legal merit, she said.

District Attorney Dave Sunday, who was also at the news conference Wednesday, said sometimes a death can be ruled a homicide and not result in criminal charges.

However, when asked if charges will be filed, Sunday said the investigation into the incident is ongoing.

Investigation: Stump said the department's investigation has revealed that Young went into the wrong wing of the facility and into a room similar to her own on Dec. 8.

The person in the room, another person with dementia, told her to leave and closed the door on Young.

“This investigation is difficult and complicated considering both people involved suffer from dementia,” Stump said.

Stump noted that there is no evidence that the injuries or Young's death were intentional.

Initially an autopsy had not been scheduled, but Stump said investigators recommended one be completed to ensure a thorough investigation. Gay confirmed Wednesday evening that an autopsy was being scheduled.

Stump said police have interviewed residents and staff at the facility, and they will continue to do so as part of the investigation.

“Anyone that was near it, around it — we’re interviewing everybody,” he said.

The chief said there were very few people around during the altercation.

“At this point we don’t have anyone that actually saw what occurred," he said.

Young and the other resident did not have any previous altercations, according to the chief.

Pleasant Acres: Lisa Sofia, CEO of Premier Healthcare, which owns the facility, said what happened to Young, who suffered from severe dementia, was a result of another resident slamming the door on her.

“This was absolutely, unequivocally, unintentional,” she said before Wednesday's news  conference.

Premier Healthcare has owned Pleasant Acres since York County sold it for $33.5 million in July.

The incident was not witnessed, but an investigation was done to determine what happened, Sofia said.

As Stump said, Sofia stated that Young had gone into the wrong room, was told to leave and had the door closed on her.

“It appears that it startled Miss Young, and Miss Young then fell,” Sofia said.

Young fractured her hip and wrists, according to Sofia.

She said a thorough investigation into the incident led the staff to discover what they believed happened. Sofia said there was no touching between the two residents.

Young was evaluated following the incident, and her family and a physician decided to keep Young in hospice care at the facility.

"Unfortunately on the 15th of December, Miss Young passed away," Sofia said.

She said the resident who closed the door on Young has no memory of the incident.

Sofia noted that there is staffing 24/7 at the facility, but Young and the other resident weren't being watched by a staff member 24/7.

“That was not necessary in this case prior to (the incident)," she said.

Sofia also said that those in the dementia unit suffer from moderate to severe dementia. They often walk around the unit, she said.

Sofia said Young had been at the facility for a long time.

Reported: Sofia said the facility also reported the incident to police and the state Department of Health. The facility is cooperating with both agencies, she said.

“We’ve been as transparent as possible,” she said.

She noted that every resident at the facility is safe.

"We are so sorry that this happened," she said.

“It’s bad enough to lose a family member, then on top of it have a cloud over how that occurred," he said.