Environmental groups called the proposed overhaul a grave assault on the aims of the 1972 Clean Water Act, the foundational U.S. water protection law. Administration supporters praised President Donald Trump for knocking back what they said was federal overreach. 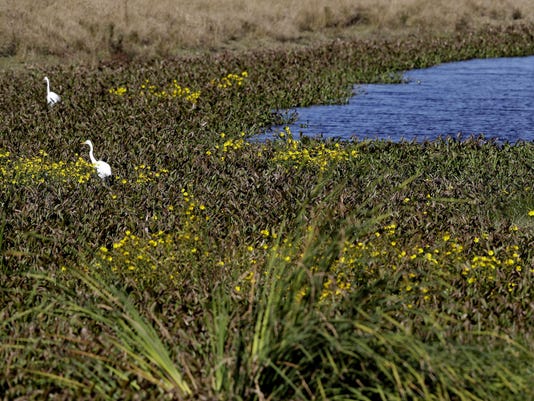 WASHINGTON — Cabinet chiefs and GOP lawmakers celebrated alongside farm and business leaders Tuesday as the Trump administration made good on one of its biggest promised environmental rollbacks, proposing to lift federal protections for thousands of waterways and wetlands nationwide.

Environmental groups called the proposed overhaul a grave assault on the aims of the 1972 Clean Water Act, the foundational U.S. water protection law. Administration supporters praised President Donald Trump for knocking back what they said was federal overreach.

The Obama-era water protection targeted for replacement by Tuesday’s regulatory overhaul “was never about clean water,” Rep. Sam Graves, a Republican and farmer from Missouri, and one of about a dozen Republican members of Congress at the launch at headquarters of the Environmental Protection Agency. “It was always about the federal government getting more control over our water and our lives.”

“I want to thank him for keeping that promise,” Graves declared of Trump.

“Thank you, Mr. President, for giving us the Christmas present of a lifetime,” said the president of the American Farm Bureau Federation, Zippy Duvall of Georgia.

Scaling back safeguards: Environmental groups said the Trump administration proposal would have a sweeping impact on how the country safeguards the nation’s waterways, scaling back not just a 2015 Obama administration interpretation of federal jurisdiction but also how federal agencies enforce the Clean Water Act.

“The Trump administration has just given a big Christmas gift to polluters,” said Bob Irvin, president of the American Rivers environmental nonprofit. “Americans all over the country are concerned about the safety of their drinking water — this is not the time to be rolling back protections.”

The Trump administration would withdraw federal protections for wetlands nationally unless they are connected to another federally protected waterway, and generally for streams, creeks, washes, ditches and ponds that exist only during and immediately after a rain.

Interior Secretary Ryan Zinke, also attending the ceremony at the EPA, told the farmers and others in attendance that the proposal “doesn’t remove any protection.”

“It puts the decision back where it should be, the people that work the land, that hunt, that own the land,” Zinke said.

“When you have uncertainty and overreach, it makes it incredibly difficult to build American homes,” Gerald Howard, the CEO of the National Association of Home Builders, said of the Obama administration’s interpretation of the water rules.

Waterways: Environmental groups say the kind of isolated wetlands, rain-fed streams and often dry washes that would lose federal protections also help buffer communities from the worsening impact of drought, floods and hurricanes under climate change, and are vital for wildlife.

Jan Goldman-Carter of the National Wildlife Federation said the move would leave waterways more vulnerable to destruction by developers and farmers and to oil spills, fertilizer runoff and other pollution. More than half of the wetlands in the lower 48 U.S. states would be without federal protection under the revisions, Goldman-Carter said.

Andrew Wheeler, acting administrator of the EPA, said there was no firm data on what percentage of waterways would lose protections.

In Michigan, where a dispute over a commercial development produced a 2006 U.S. Supreme Court ruling that failed to resolve the dispute over federal jurisdiction, outdoor sportsman Dave Smethurst said he feared the proposed revisions would harm his beloved trout streams and wetlands that host ducks and other waterfowl.

“Some of us were alive when the fish were dying in Lake Erie and the rivers were catching fire,” said Smethurst, 71, of Gaylord, Michigan. “What effect will this have on the river I fish and the rivers where my son fishes in Montana? It’s going to put the fish and the wildlife at risk again. We’re going backwards.”

Ross specified that the administration did not dwell on any role that the waterways play in mitigating the effects of climate change.

“We didn’t do climate modeling,” he said of the proposed rollbacks. “It’s a legal policy construct informed by science.”

The rules now go up for public comment, ahead of any final adoption by the Trump administration. Environmental groups promise legal challenges.

John Duarte, a farmer who battled the U.S. Army Corps of Engineers for years over accusations of destroying wetlands when plowing a field to grow wheat in Tehama County, California, said the Trump administration proposals are an improvement over the Obama policies and “will provide some relief” but don’t go far enough to protect landowners from government overreach.

“The agencies won’t be constrained by these new regulations,” said Duarte, who reached a $1.1 million settlement in 2017 but said the fight cost him several millions more in legal fees and other expenses. “It’s Sheriff of Nottingham behavior – agencies coming onto your property, making some claims against you and extracting what they can for the king.”