The NRA has put $11 million into midterm races this year — less than half what it spent four years ago in a campaign that gave Republicans full control of Congress. This year’s totals are also far below the $54 million the group spent in 2016 on both the presidential and congressional races. 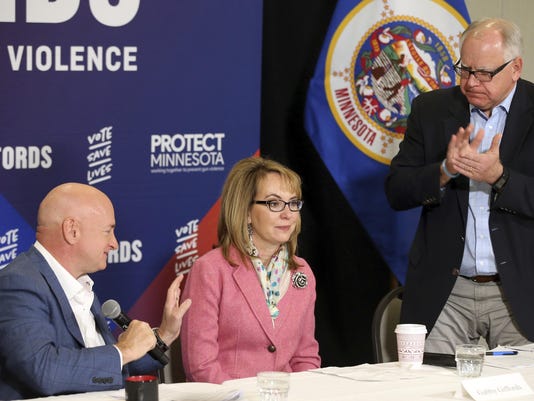 WASHINGTON — The National Rifle Association — long seen as a kingmaker in Republican politics — is taking a lower profile in this year’s high-stakes midterm campaign, a sign of the shifting dynamics of the gun debate as the GOP fights to maintain its grip on Congress.

The NRA has put $11 million into midterm races this year — less than half what it spent four years ago in a campaign that gave Republicans full control of Congress. This year’s totals are also far below the $54 million the group spent in 2016 on both the presidential and congressional races.

The shift comes as spending to support tougher gun control measures has surged. Everytown for Gun Safety, a group founded by former New York City Mayor Michael Bloomberg, pledged $30 million for this year’s election, and has continued to put new money into competitive races in the final days. A political action committee formed by Gabby Giffords, the former congresswoman wounded in a shooting, is spending nearly $5 million.

It’s the first time under current campaign finance laws that the NRA might be outspent by gun control groups, though the organization often ramps up spending late in the campaign. That money won’t show up in federal financial reports until after Election Day.

Political landscape: It all underscore a changing political landscape on guns after a series of election year mass shootings, including the February massacre at a Parkland, Florida, high school that left 17 people dead, and Saturday’s deadly attack at a Pittsburgh synagogue.

“The politics of guns has changed,” said Jim Kessler, the senior vice president for policy at Third Way, a centrist think tank. “The groups supporting more gun safety restrictions are smarter than in the past and have more resources, both in terms of people and money, than in the past.”

With polls showing that the majority of Americans now support at least some tightening of gun laws, the issue is no longer taboo in swing districts, particularly the suburban areas that could determine which party controls the House next year. Everytown and Giffords’ group are on the air in competitive districts in Texas, Virginia, Kansas and elsewhere.

After the Pittsburgh shooting, a Bloomberg aide said Everytown bought another $700,000 in advertisements aimed at ousting Rep. Mike Coffman, a vulnerable Republican who represents a suburban Denver district — a significant sum to spend on a single House race in one week.

The group has also spent about $4 million in the Atlanta suburbs to back Democrat and gun control advocate Lucy McBath, whose son was shot and killed in 2012.

Legislation: Despite the public polling, there are no guarantees that sending more pro-gun control lawmakers to Washington would result in tougher legislation. Modest measures have repeatedly been blocked in Congress, even as Americans have grown more supportive of steps such as banning assault weapons and tightening background checks.

Bloomberg, who is weighing a run for president as a Democrat in 2020, promises to keep up the pressure on lawmakers and candidates he’s backing if they end up on Capitol Hill.

He continued: “The nice thing about the House, it may be a stupidly designed system but if they don’t do what they said they were going to do, you get another crack at deciding to support them or somebody else two years from now.”

An NRA spokeswoman would not comment on the group’s election spending compared to organizations pushing for stricter gun laws.

Leveling the field: Bloomberg, who is spending $120 million on the midterms, has helped pro-gun control groups level a playing field long dominated by the NRA.

The organization was riding high after the 2016 election, with a strong supporter in the White House and Republicans in charge of both the House and Senate.

But 2018 has proved to be a tumultuous year for the NRA, which has been faced with boycotts from parts of corporate America in the wake of mass shootings and an investigation into what federal authorities allege were covert Russian agents seeking to influence the 2016 election to benefit Trump by courting NRA officials and funneling money through the group.

Publicly, the NRA has portrayed itself as being in financial distress because of deep-pocketed liberal opposition to guns and what it calls the mainstream media “spewing toxic lies” about the group. Over the summer, the organization raised its annual dues fees from $40 to $45 — the second increase in two years.

A ploy? NRA watchers dismiss the notion that the organization is in trouble and say it’s more of a ploy to energize its ardent supporters, which in turn could help bring in more donations.

“It’s in the NRA’s interests to exaggerate how much trouble it’s in,” said Robert J. Spitzer, chairman of political science at the State University of New York at Cortland and an expert on guns and the Second Amendment.

While the NRA is not pumping the same levels of money into this year’s elections, it still has much at its disposal to try to sway campaigns: its NRATV media arm, social media and an ability to mobilize its millions of members to get them to the polls.

The NRA’s membership rolls and finances are not public, but the organization has said it has about 6 million in its ranks. Those who closely watch the group believe its membership is closer to 4 million.

Both the NRA and groups such as Everytown can also quietly influence elections with money that doesn’t have to be reported in publicly available campaign finance reports.