In this April 10, 2017, photo, a FedEx envelope is placed into a dropbox in North Andover, Mass. FedEx Corp. says there will only be a surcharge during the holiday season on packages that need additional handling, are oversized or unauthorized. The move comes as the package delivery company and rival UPS jockey for customers that are increasingly doing their holiday shopping online and have packages shipped. (AP Photo/Elise Amendola)(Photo: Elise Amendola / AP)

Positions are full-time and part-time workers at the York County warehouse location, according to the company's website. They are needed through December.

Seasonal hiring in 2018 is about 10 percent higher than it was in 2017, FedEx noted. The multinational courier delivery services reported in September that it plans to hire about 55,000 workers nationwide and increase hours for some existing employees for the holiday season.

The U.S. package delivery company said its preparing to "cater to an expected jump in shipments due to an online shopping boom."

FedEx Ground in Harrisburg also plans to hire up to 750 more positions this year, according to the company. 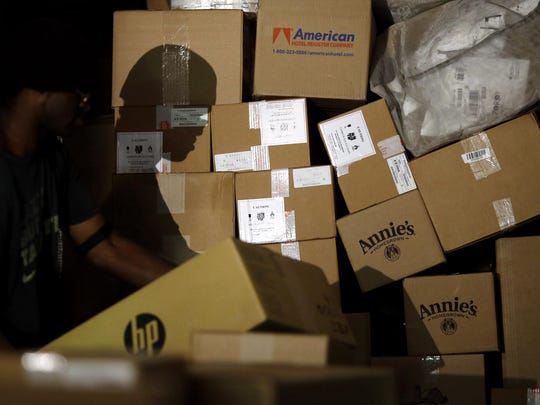 In this Nov. 20, 2015 photo, a worker's shadow is cast against boxes as he unloads them from a truck trailer at Worldport in Louisville, Ky. UPS and FedEx have been working with major retailers to hone their forecasts and have tailored their extra holiday workers to better meet the shipping spikes right after Thanksgiving and the weekend before Christmas. (AP Photo/Patrick Semansky) (Photo: Patrick Semansky / AP)