The campaign will allow for dozens of updates, but the focus will be on a couple of key areas — a major one being science. 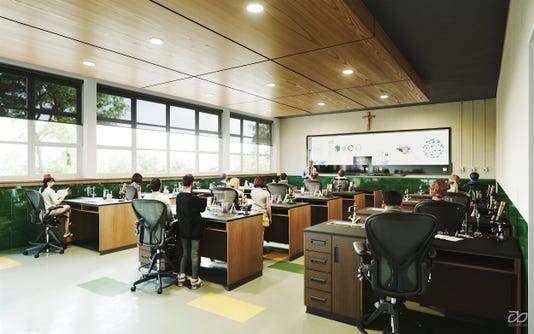 York Catholic plans to create new science labs for its students as part of the school's $8 million capital campaign. Science and STEM education have always been a major focus in YC programs.(Photo: Submitted)

The campaign, called “Grow Today, Impact Tomorrow,” will allow for dozens of updates, but the focus will be on a couple of key areas — a major one being science.

Since the building's opening in 1958, the Brady family made sure the topic would be a major component of the school's programs, funding a STEM wing the following year, back when the term, referring to science, technology, engineering and mathematics, was not a buzzword, said school principal Katie Seufert.

The campaign, announced in a Monday, Oct. 22, news release, is the culmination of five years of preparation aligned with an opportunity to celebrate the school's 90th anniversary next year, she said.

Seufert hopes the upcoming improvements will ensure the school is ready for the next 90 years.

Campaign: York Catholic's building has not had a major update since its construction, so the administration is looking forward to making changes that reflect the school's evolving programs, the school said.

The goal is to raise a total of $8 million over three to five years, which will fund two phases of renovation, the release states.

The first phase will run the gamut from academics and safety to student life and sports.

Goals include classrooms with facilitywide air conditioning, updated science labs and lecture rooms, safety enhancements such as an elevator and the installation of a turf athletic field.

A rendering of the turf field planned for York Catholic High School as a part of the school's $8 million capital campaign. (Photo: Submitted)

The field will be used by 12 athletic teams, which so far have been confined to a neighboring grass field — causing 24 competitions to be canceled and dozens to be rescheduled after frequent rain, Seufert said.

And a new student center and relocated chapel will be part of the Student and Media Center, which also will house a College and Career Readiness Center, acting as a central hub for students in the school's lobby.

Seufert called the chapel "the heartbeat of the school," representing its spiritual mission.

York Catholic has always positioned the school as a third space for students to go to feel safe and welcome, after church and home, and since 90 percent of students or more participate in after-school activities, it's important to create that area for them, she said.

Projects underway: Thanks to $5 million in unexpected anonymous foundational and lead gifts prior to the launch, Phase I is already underway.

The projected cost of the first phase is between $4 million and $4.5 million, according to the release.

Beginning next summer, plans will be in motion to upgrade classrooms and air conditioning and install the turf field and elevator by the start of the 2019-20 school year. 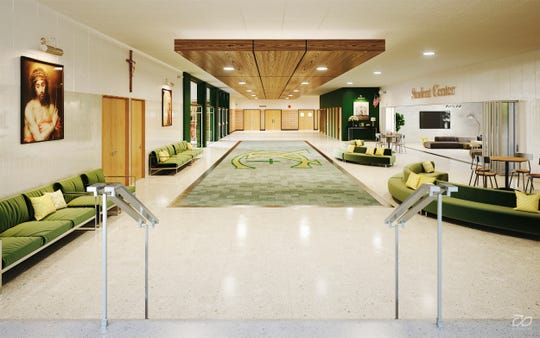 A rendering of the new lobby planned for York Catholic High School, which will function as a hub for students. This is one of many projects that will be funded by the school's $8 million capital campaign. (Photo: Submitted)

The school now will focus the efforts of the campaign on Phase II, which will include further renovations to support science studies.

The Brady Science Wing, which serves seventh- and eighth-grade students, will be modernized with air-conditioned classrooms, science labs, a central office, additional restrooms and safety upgrades.

Additionally, in Phase II the school hopes to add home and guest grandstands for the new turf field as well as a concession stand, restrooms and locker rooms at the athletic field.

Looking ahead: Long-term goals of the campaign are increasing the school's 618-student enrollment by 20 students over five years and hiring additional full-time staff members, the release states.

Based on the momentum so far, Seufert is optimistic the campaign goal can be reached.

It's been energizing for students, staff and the community — especially alumni, the majority of whom have donated to the campaign, she said.

The school has also received financial support from local foundations, businesses and organizations, including a $750,000 donation from the Airie Knipel, Harry V. and J. William Warehime Foundation.

"Each time we showcase the plans we have for the school, the excitement seems to grow even more,” she stated in the release.

"I'm really looking forward to the physical component of our building reflecting the strong academic and spiritual mission of our school that produces quality students focused on service to a global society upon graduation," she said.