A Florida man with a long criminal history was charged Friday in the nationwide mail-bomb scare targeting prominent Democrats who have traded criticism with President Donald Trump. 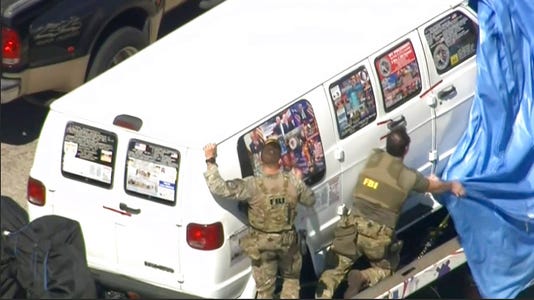 This frame grab from video provided by WPLG-TV shows FBI agents covering a van after the tarp fell off as it was transported from Plantation, Fla., on Friday, Oct. 26, 2018, that federal agents and police officers have been examining in connection with package bombs that were sent to high-profile critics of President Donald Trump. The van has several stickers on the windows, including American flags, decals with logos and text. (WPLG-TV via AP)(Photo: AP)

WASHINGTON — A Florida man with a long criminal history was charged Friday in the nationwide mail-bomb scare targeting prominent Democrats who have traded criticism with President Donald Trump.

It was a first break in a case that has seized the national conversation and spread fear of election-season violence with little precedent in the U.S.

Justice Department officials announced five federal charges against Cesar Sayoc, 56, of Aventura, Florida, and revealed that a fingerprint found on a package helped them identify their suspect.

Court records show Sayoc, an amateur body builder with social media accounts that denigrate Democrats and praise Trump, has a history of arrests for theft, illegal steroids possession and a 2002 charge of making a bomb threat.

The development came amid a nationwide manhunt for the person responsible for at least 13 explosive devices addressed to prominent Democrats including former President Barack Obama, former Vice President Joe Biden and Hillary Clinton. The case continued widening Friday even as Sayoc was detained, as investigators in California scrutinized a similar package sent to Democratic Sen. Kamala Harris, her office said.

In Washington, Attorney General Jeff Sessions cautioned that Sayoc had only been charged, not convicted. But he said, "Let this be a lesson to anyone regardless of their political beliefs that we will bring the full force of law against anyone who attempts to use threats, intimidation and outright violence to further an agenda. We will find you, we will prosecute you to the fullest extent of the law."

In Florida, law enforcement officers were seen on television examining a white van, its windows covered with an assortment of stickers, outside the Plantation auto parts store. Authorities covered the vehicle with a blue tarp and took it away on the back of a flatbed truck. 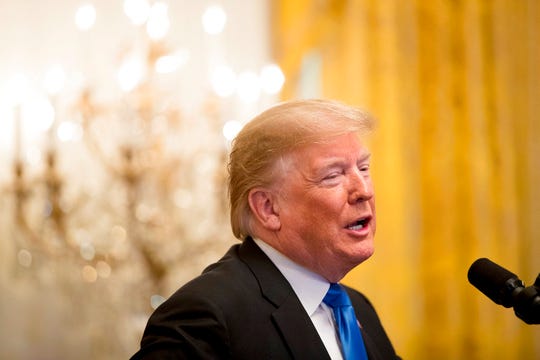 The stickers included images of Trump, American flags and what appeared to be logos of the Republican National Committee and CNN, though the writing surrounding those images was unclear.

Trump, after Sayoc was apprehended, declared that "we must never allow political violence take root in America" and Americans "must unify." As in comments earlier in the week, he did not mention that the package recipients were all Democrats or officials in Obama's administration, in addition to CNN, a news network he criticizes almost daily.

Earlier Friday, he complained that "this 'bomb' stuff" was taking attention away from the upcoming election and said critics were wrongly blaming him and his heated rhetoric.

The Justice Department scheduled a Friday afternoon news conference in Washington that was to include New York Police Commissioner James O'Neill, whose department investigated the mailings with the FBI.

Law enforcement officials said they had intercepted a dozen packages in states across the country. None had exploded, and it wasn't immediately clear if they were intended to cause physical harm or simply sow fear and anxiety. 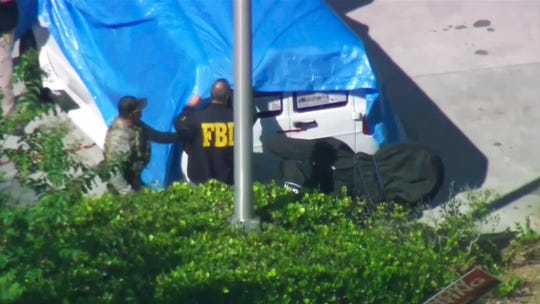 In this frame grab from video provided by WPLG-TV, FBI agents cover a van parked in Plantation, Fla., on Friday, Oct. 26, 2018, that federal agents and police officers have been examining in connection with package bombs that were sent to high-profile critics of President Donald Trump. The van has several stickers on the windows, including American flags, decals with logos and text. (WPLG-TV via AP) (Photo: AP)

Investigators believe the mailings were staggered. The U.S. Postal Service searched their facilities 48 hours ago and the most recent packages didn't turn up. Officials don't think they were sitting in the system without being spotted. They were working to determine for sure. The officials spoke to The Associated Press on condition of anonymity to discuss an ongoing investigation.

Online court records show that Sayoc in 2002 was arrested and served a year of probation for a felony charge of threatening to throw or place a bomb. No further details were available about the case.

Sayoc was convicted in 2014 for grand theft and misdemeanor theft of less than $300, and in 2013 for battery. In 2004, he faced several felony charges for possession of a synthetic anabolic-androgenic steroid. He also had several arrests for theft in the 1990s. 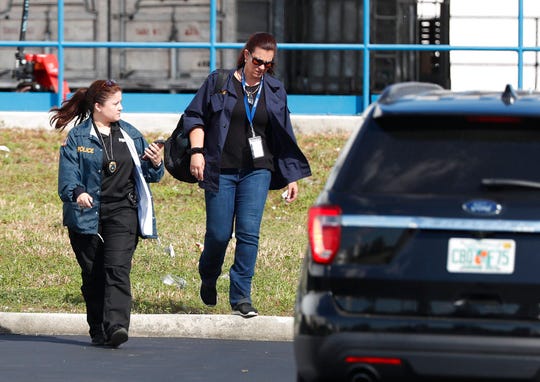 He filed for chapter 7 bankruptcy in 2012, informing the court he had $4,175 in personal property and more than $21,000 in debts. His name is also listed on business records tied to dry cleaning and catering businesses. Records show he was born in New York and according to an online resume he attended college in North Carolina.

Investigators were analyzing the innards of the crude devices to reveal whether they were intended to detonate or simply sow fear just before Election Day.

Law enforcement officials told The Associated Press that the devices, containing timers and batteries, were not rigged to explode upon opening. But they were uncertain whether the devices were poorly designed or never intended to cause physical harm.

Most of those targeted were past or present U.S. officials, but one was sent to actor Robert De Niro and billionaire George Soros. The bombs have been sent across the country - from New York, Delaware and Washington, D.C., to Florida and California, where Rep. Maxine Waters was targeted. They bore the return address of Florida Rep. Debbie Wasserman Schultz, the former chairwoman of the Democratic National Committee.

The common thread among the bomb targets was obvious: their critical words for Trump and his frequent, harsher criticism in return.

The package to Clapper was addressed to him at CNN's Midtown Manhattan address. Clapper, a frequent Trump critic, told CNN that he was not surprised he was targeted and that he considered the actions "definitely domestic terrorism." 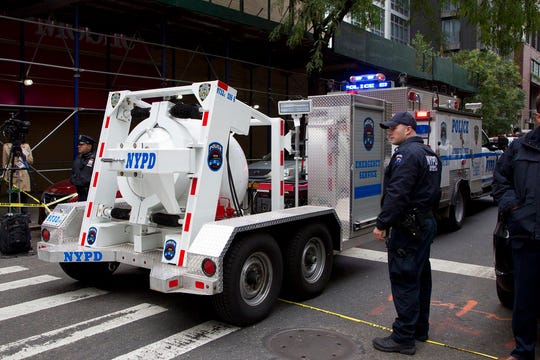 The devices were packaged in manila envelopes and carried U.S. postage stamps. They were being examined by technicians at the FBI's forensic lab in Quantico, Virginia.

The packages stoked nationwide tensions ahead of the Nov. 6 election to determine control of Congress — a campaign both major political parties have described in near-apocalyptic terms. Politicians from both parties used the threats to decry a toxic political climate and lay blame.

The bombs are about 6 inches long and packed with powder and broken glass, according to a law enforcement official who viewed X-ray images. The official said the devices were made from PVC pipe and covered with black tape.