The York City zoning hearing board denied a request to turn an East Market Street single family home into a boarding house at a Thursday, Oct. 18 meeting,  a decision in-line with city staff and city planning commission recommendations. 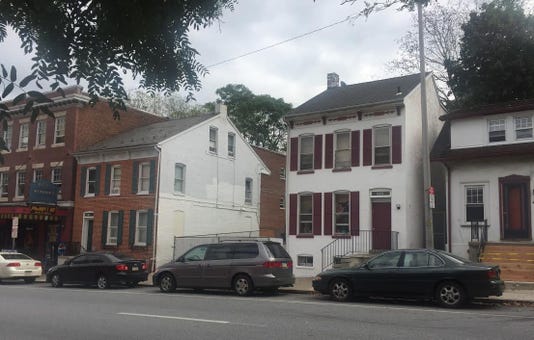 The owner of the Lincoln Hotel and Pandora's Box Bar and Grill is seeking to change the variance to allow her to run a boarding house a few buildings down, at 454 East Market Street.(Photo: Rebecca Klar)

The York City zoning hearing board denied a request to turn an East Market Street single family home into a boarding house at a Thursday, Oct. 18, meeting, a decision in line with city staff and city planning commission recommendations.

Kinard has been running the building as a boarding house with six rooms, one boarder in each, for seven months, she said.

In order to legally continue running the house, which Kinard said she does in order to give people with little money a place to live, she sought to change the permitted use of the property.

The zoning board voted 3-0 to deny all four variance requests, with chairman Robert Hollis absent.

Owner occupancy is important in order to supply support and attention to the boarders, said board member Michael Miller.

Kinard said she comes by daily, and her staff at the Lincoln Hotel, an 18-unit building located just a few buildings down, are just a phone call away.

"I really do run a tight ship," Kinard said.

Brandon Maszon, a case worker at Amiracle4Sure, a Harrisburg-based nonprofit that provides assistance to individuals on state parole, said Kinard goes "above and beyond" to give people a place to stay.

He added that income is not her main goal.

Board member Franklin Williams said the board was not deciding on Kinard personally but rather deciding on the property.

"The next person who comes along might not measure up to you," he said.

While board members did not disagree with Kinard that this may be a need in the city, they ultimately decided that this is not the location for it.

Kinard said she will continue to look into other options.

"Somebody's got to help them, and that's me," she said.

In other business: Also during the meeting, the zoning hearing board unanimously approved a request by Jamus Bryant to create a storage unit facility at 229-237 S. Court St.

Bryant said he plans to reserve 15 of the 30 storage units for people in emergency situations, such as battered women who need a place to keep their belongings when they flee dangerous situations.

For emergency situations, units will be open all hours; the facility will be open normal business hours for others.

The board also voted 2-1 to dismiss a case for Bryant seeking a parking variance for a 612 W. Market St. property.

Franklin voted not to dismiss the case.

Bryant is seeking to create a six-unit apartment building at a former 18-unit boarding house.

The apartment would require nine spaces, and currently it has none. However, Bryant said he has negotiated  to lease spaces from a city lot behind the building.

City officials said the lot is located within 100 feet of the property, which is allowed under a city provision.

Based on this provision and agreement, board members Benjamin Michael and Miller voted to dismiss the case.

Franklin said he did not think the lot was within 100 feet of the building.

A handful of residents in the audience left after the case was dismissed. They were not given a chance to speak on the issue, since the case was never opened.

Vacant seat: It was the last meeting for board member Michael.

Michael's departure creates a second vacancy on the five-member board. There are also three alternate member position vacancies.

If all three current members are present, the board still has a quorum to vote.