Challenged on the claim, the Wolf campaign on Monday cited three references in a separate report by the state court system, issued in 2003, that had been attached to the Senate report as an appendix. 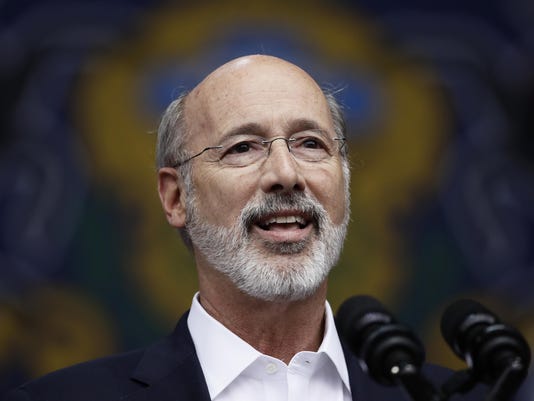 The Democratic governor, who has called Pennsylvania’s death penalty system “ineffective, unjust and expensive,” instituted the moratorium shortly after taking office in 2015, fulfilling a campaign promise. He said it would remain in place until he could review the Senate report, which was already years in the making when he took office.

Although Pennsylvania has 144 people on death row, the most recent execution was nearly two decades ago.

Capital punishment is a politically divisive issue in the state, and Wolf has a month left in a re-election campaign against a Republican opponent, Scott Wagner, who is an ardent death penalty supporter.

During a debate with Wagner on Oct. 1, and again in a meeting with the Pennlive.com editorial board in Harrisburg on Monday, Wolf contended a Senate report recommended continuing the moratorium.

Here’s a look at the claim:

THE FACTS: Wolf is wrong when he claims the Senate-ordered report released in June recommended he continue the moratorium.

The set of recommendations in the report, “Capital Punishment in Pennsylvania: The Report of the Task Force and Advisory Committee,” included having the state set up a publicly funded agency to provide legal representation for those facing the possibility of a death sentence. It also recommended making public the state’s lethal injection protocol and using “an appropriate and effective drug.”

It made no mention of Wolf’s moratorium, and took no position about whether the death penalty should remain in place.

Challenged on the claim, the Wolf campaign on Monday cited three references in a separate report by the state court system, issued in 2003, that had been attached to the Senate report as an appendix.

A campaign spokeswoman then said that earlier report was cited in error and said Wolf “always believed” that the Senate report “implied that the moratorium should continue until these problems are properly addressed.”

As governor, Wolf has been granting reprieves – not commutations – when inmates are scheduled for execution. The inmates who receive reprieves remain on death row.

When Wolf imposed the moratorium, he said he had concerns about a “flawed system that has been proven to be an endless cycle of court proceedings as well as ineffective, unjust, and expensive.”

Although the death penalty has been legal in Pennsylvania since the 1970s, the state has executed only three people in the intervening years, and all three had voluntarily given up their appeals.

State and federal courts have prevented any other convicted murderers from being subject to capital punishment, so it’s not likely executions would begin if Wolf were to stop issuing reprieves.