Downtown Inc rebranded the city as "historically edgy" in a new push to encourage York tourism. 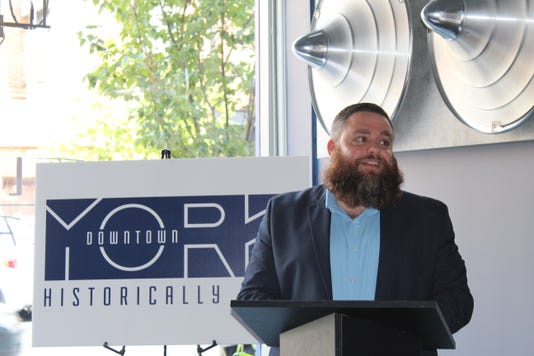 Downtown York has a more than 200-year-old history, but the birthplace of the Articles of Confederation has more to offer than its history — it's also a hub of restaurants, stores and arts and culture festivals, according to Downtown Inc.

That combination led Downtown Inc to its rebranding and corresponding new tagline for the city: "Historically edgy."

"Our tagline, historically edgy, creates energy and integration between two primary assets of Downtown York that are typically not interrelated — our history and our edgy entrepreneurial spirit," marketing and communications manager Andrew Staub said. "Together they tell the story of a place that has been making things happen and moving things forward for hundreds of years."

Downtown Inc representatives unveiled the new brand at a launch event on Monday, Oct. 8, at the Left Bank restaurant, which was reopened in July after a remodeling project.

The city rebranding is part of a larger initiative, the Brand York Project, launched in 2017, that aims to drive tourism and economic development throughout York County.

Downtown Inc partnered with representatives from organizations across York County to form a Brand York Steering Committee that's been working on the historically edgy brand for more than a year.

The new tagline comes with a new logo, which Staub said also represents the city's identity.

The font is industrial and architectural, and the tones are "fun and vibrant, yet grounded," Staub said.

The new Downtown York logo is said to recognize the industrial history of the city. (Photo: Downtown Inc)

Along with the logo and tagline, the rebrand includes a revamping of Downtown York magazine. The latest Fall/Holiday 2018 issue includes stories from local residents and business owners about what "historically edgy" means to them.

Downtown Inc aims to collect 277 stories, one for each year of York's existence, by the end of 2018.

Downtown Inc invites the public to share their "historically edgy" York stories that will be told in upcoming magazines and on social media platforms.

However, as community leaders work to "achieve lasting progress," Downtown Inc said its "brand research has already shined a light on many positives."

The logo and tagline will be used throughout Downtown York in store windows and on T-shirts.

Downtown Inc also plans to use the logo in surrounding cities, such as Baltimore, Philadelphia and Washington, D.C., to encourage tourists to visit York.